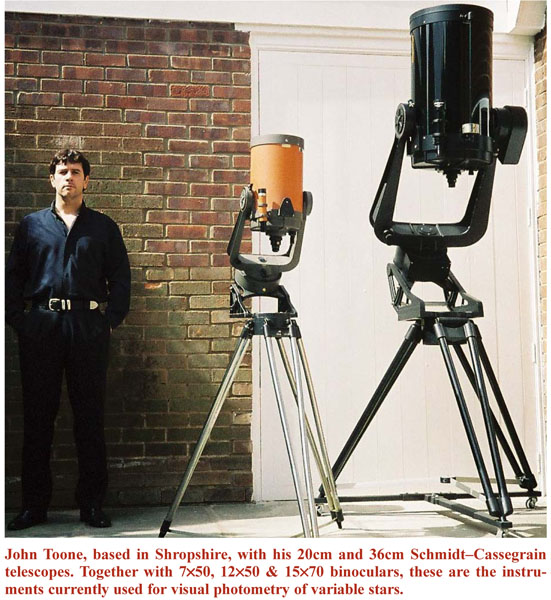 Basic visual photometry of naked eye stars began with the work of Hipparchus, whose star catalogue compiled around 135 BC listed stars’ brightness in descriptive terms such as ‘brilliant light’, ‘second degree’ and ‘faint’. In AD 137 Ptolemy’s star catalogue (the Almagest) ranked naked eye stars in terms of six magnitude classes which formed the basis of the future magnitude scale.
True visual photometry of variable stars commenced with Tycho Brahe in 1572-1574, when he measured the diminishing brightness of the supernova in Cassiopeia by comparing it with nearby stars, thus establishing the basic methodology on which visual photometry of variable stars would be undertaken. Visual photometry started to get serious when William Herschel observed a particularly bright maximum of Mira in 1779 (it briefly rivalled Aldebaran), which triggered his interest in accurately measuring the brightness of stars. Two years later John Goodricke figured out the eclipsing nature of Algol through careful measurements of its brightness. Then in 1796 Herschel published an article entitled ‘On the method of observing the changes that happen to the fixed stars’, where he first described a system of undertaking stepped light estimates by means of sequences. Relatively accurate visual photometry therefore dates from the late 18th century, although useful work was undertaken on a few bright Mira stars by European astronomers beforehand. Initially, the brightness of a star was recorded in grades, until Norman Pogson’s 1856 proposal for the standard magnitude scale was universally adopted at the end of the 19th century.
Since 1850 about 20 million visual observations of variable stars have been undertaken worldwide by approximately 10,000 observers, and 943 BAA VSS observers have been responsible for 10% of these observations. So considering that the BAA VSS (formed in 1890) is also the longest established group of variable star observers, it has played a very influential role in the long term systematic monitoring of variable stars. (continued)