Part I: The 2018 eastern elongation of Venus

The 2018 eastern elongation was a poor one for UK-based observers, with the planet situated low down in the summer skies. In spite of its altitude, a small number of dedicated observers made frequent observations covering much of the elongation. Most of those received by the Section were good-quality images showing Venus in both UV and IR wavelengths. Some visual observations were also received and as we shall see in the report, they compare quite favourably to images taken in UV. A list of contributing observers (along with their instrumentation and location) for both the eastern and western elongations is given in Table 1.

Venus passed through superior conjunction on 2018 Jan 9. At such times Venus, the Sun and the Earth lie on a straight line, with the Sun between Venus and the Earth. The planet emerged into our evening skies and achieved a modest altitude. During this time, a number of observers sent in valuable observations showing Venus at high phase. The situation did not last however and by early May, the planet was very low down by sunset.

Theoretical dichotomy (half phase) occurred on 2018 Aug 15 and Venus reached greatest eastern elongation on 2018 Aug 17, when it was situated 46° east of the Sun. The planet continued to draw closer to Earth, now presenting its distinctive crescent phase to telescopic observers. Finally, Venus reached inferior conjunction (passed between the Sun and the Earth) on 2018 Oct 26; this marked the start of the 2018–’19 western elongation with the planet located in the morning skies. 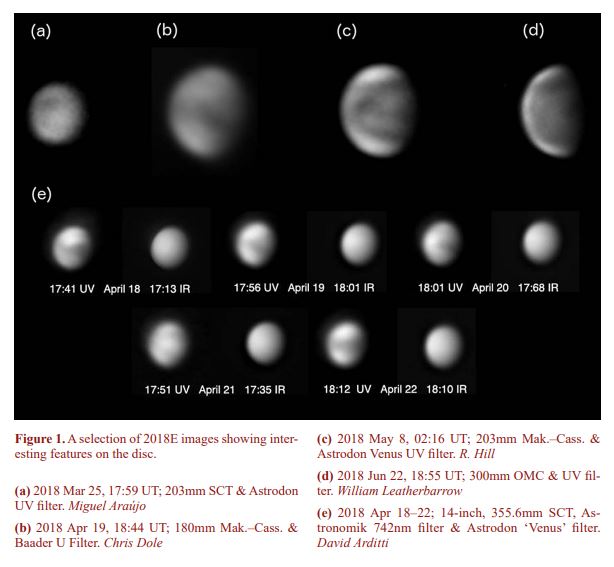 It is often said that the telescopic view of Venus is disappointing, with the planet showing little more than a blank white disk. While it is true that cloud markings of the Cytherean atmosphere are somewhat elusive, those observers sensitive to the blue end of the spectrum will be able to see the distinctive ‘Y’-shaped cloud markings and other bright spots and streaks that come and go.

Many imagers now have access to good-quality UV and IR filters. Observations made in these wavelengths are invaluable, frequently revealing interesting structures and details which are invisible to the human eye.

A number of observations from when Venus presented a high phase show cloud formations. Araújo’s image (Figure 1a), obtained using a UV filter on 2018 Mar 25, shows a 95% illuminated Venus with a prominent dark marking in the far south, and more subtle shadings in the north.

Arditti took a good series of images on 2018 Apr 18–22 in both UV and IR (Figure 1e). This sequence is interesting and shows the apparent rotation of a dark cloud along the equator. While the feature is striking in UV, it is entirely absent in IR images taken at about the same time. On 2018 Apr 19, Dole took a good UV image of Venus (Figure 1b) showing the same dark marking as that recorded by Arditti.

Similar dark features were recorded by…