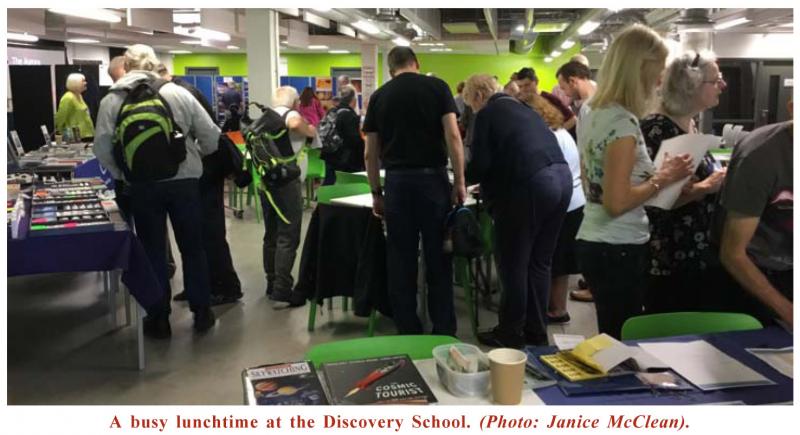 Almost 100 people gathered on a beautiful sunny day in the historic city of Newcastle for the 2018 BAA Spring Meeting. The Discovery School kindly opened its doors for us and not only provided an excellent meeting hall, but also a tasty buffet lunch with an open patio to sit in and soak up some rays. Newcastle Astronomical Society were our hosts, and they supported the event by looking after reception, and the raffle amongst many other tasks.
Several Section Directors were in attendance, with a chance for people to engage during advice sessions with Lyn Smith of the Solar Section, Sandra Brantingham of the Aurora & Noctilucent Cloud Section, and Callum Potter of the Deep Sky Section, during lunch and tea breaks.
Callum Potter, President, welcomed us all and opened the meeting, followed by Sandra Brantingham, who updated us on the Aurora and NLC Section, dispelling any doubt that aurora ever made it as far south as Newcastle, but that what is seen on some beautiful images is not what the eye sees alas. Lyn Smith then gave an update on the Solar Section work, and the audience offered commiserations to her for a dearth of sunspots lately.
Andy Wilson introduced the audience to the contributions that amateurs can make to Spectroscopy – and how his hobby is blending in nicely into his PhD. Lucky guy. Alex Pratt then explained the value of observing and recording occultations of stars by asteroids, and how Pro-Am collaborations are increasing our knowledge of the shape and profiles of these small solar system bodies.
After a very refreshing lunch and time to enjoy the sunshine, the afternoon opened with an informative review of the Newcastle Astronomical Society from Prof Richard Stephenson, their President. This was followed by Prof Alan Hood, professor in the Solar & Magnetospheric Theory Group at the University of St Andrews in Scotland, who spoke on ‘Our Sun and its magnetic personality’. With many excellent video clips from the SOHO satellite of coronal mass ejections (CMEs) and solar comet-eating events, he described the ‘geography’ of the regions of the Sun and the upcoming launch of the solar orbiter.
After a welcome tea break, the raffle was drawn, and then the afternoon session began with a talk by Prof Stuart Reid from the University of Strathclyde. He has spent the last 15 years developing technology for gravitational wave detectors, and is co-inventor of ‘nanokicking’, where precise nanoscale vibrations are used to control the behaviour (and fate) of adult stem cells which can be used to grow bone in the lab from a patient’s own cells, specifically to treat landmine survivors. His talk entitled, ‘A new Window on the Universe – the dawn of gravitational wave astronomy’, was also lavishly illustrated, and took us right back to the story of how gravity was first revealed and understood.
Finally, Dr James Nightingale from the University of Durham spoke on ‘Einstein’s Universe in the light of Gravitational Lensing’ – the effect where we appear to see light bending around massive objects due to their gravity. Starting with the University of Warsaw’s ‘Optical Gravitational Lensing Experiment’ (OGLE) project at Las Campanas Observatory in Chile, where over a million stars are being surveyed and micro-lensing effects recorded, he ended up in the world of strong lensing: perfect rings and giant arcs, telling us about the Space Warps project, to which amateurs can contribute: www. spacewarps.org
The meeting was then closed by the President.  He and the audience thanked all at Newcastle Astronomical Society, the Discovery School and staff, and of course Hazel Collett for her hard work putting together another excellent meeting, and Ann Davies for travelling up from Newbury to support the event with the BAA sales table.