The 2019 transit of Mercury

On 2019 Nov 1 the innermost planet, Mercury, passed across the face of the Sun. This astronomical event is known as a transit and is a phenomenon unique to the inferior planets, Mercury and Venus. While transits of Venus are comparatively rare, those of Mercury are much more frequent. The previous transit of the planet occurred on 2016 May 9 and was well observed from the UK by BAA members.1 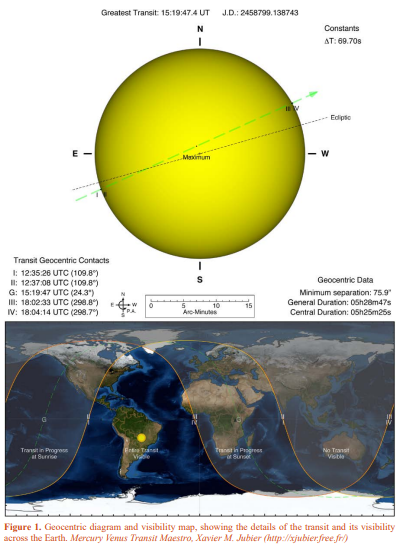 The 2019 transit of Mercury occurred in winter for UK-based observers – this meant a greater likelihood of poor weather and of course the Sun was lower in the sky. Weather conditions were indeed rather bad, with heavy rain and wind over much of the country, but nonetheless a number of observers did manage to see either part or all of the transit. Those members who communicated their observations to the Section are listed in Table 1.

The exact times of the transit were given in the BAA Handbook.2 First contact, when Mercury appeared to touch the SE limb of the Sun, was predicted to occur at 12:35:26 UT. Just before then, observers using telescopes fitted with H-alpha filters would have been able to observe the planet against the Sun’s spicule layer. A spicule is a region of hot plasma in the chromosphere of the Sun, typically about 500km in diameter and only visible in H-alpha.

Once on the solar disc, Mercury then proceeded (at a somewhat leisurely pace) to move in a straight line towards the NW limb, with the point of greatest transit predicted at 15:19:47.4 UT. Last contact, which marks the point where Mercury has left the solar disc and is on the NW limb, was due to occur at 18:04:14 UT.

Members’ observations of the transit were presented in issue 2 of Messenger, the Section newsletter.3 This included an account written by the Mercury Coordinator, Chris Hooker, who together with other members of Newbury Astronomical Society visited the Francis Baily Primary School in Thatcham to allow the children at the school to observe the transit. Good weather conditions prevailed and they were able to see most of the ingress phase, during which time a five-minute video was recorded through a Meade LXC-10 SCT with a Baader AstroSolar filter. This video is available to view at the Section website. 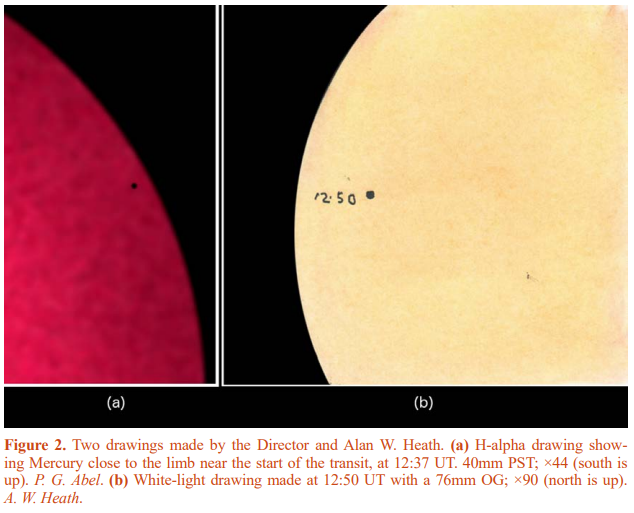 Although poor conditions prevailed, a total of 24 contributors managed to make observations of the transit. Four Section members submitted visual observations; these were Heath, Meadows, Scanlan and the Director. The Director (observing with Pete Lawrence) made a number of visual observations in H-alpha. It was particularly hoped that Mercury could be seen visually against the spicule layer of the Sun, however unfortunately the skies were insufficiently clear to permit this. Figure 2a shows a drawing made by the Director at the start of the transit.

Veteran observer Alan W. Heath also battled with poor conditions, which prevented him from observing the start. However, a cloud break did occur at 12:50 UT and Heath made an integrated light (IL) drawing of Mercury against the solar disc, shown in Figure 2b. 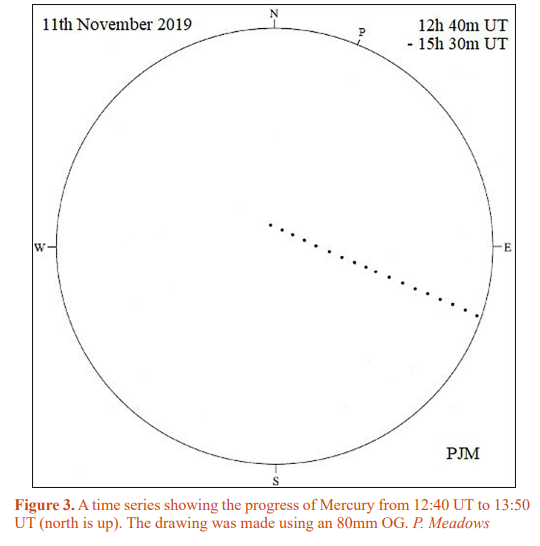 Both Meadows and Scanlan completed time series drawings which showed the progress of the transit. Figure 3 shows the series made by Meadows, who was able to observe past the point of greatest transit and who made the longest visual observing run. No drawings were submitted showing Mercury against the spicule layer of the Sun, and no visual observations of the ‘black drop effect’ were reported to the Director.

A number of observers did manage to image Mercury against the spicule layer, and a particularly good example of this was obtained by David Arditti; this is shown in Figure 4. Here Mercury can be seen as a perfectly black circle, silhouetted against the jets of plasma forming the spicule layer of the chromosphere.