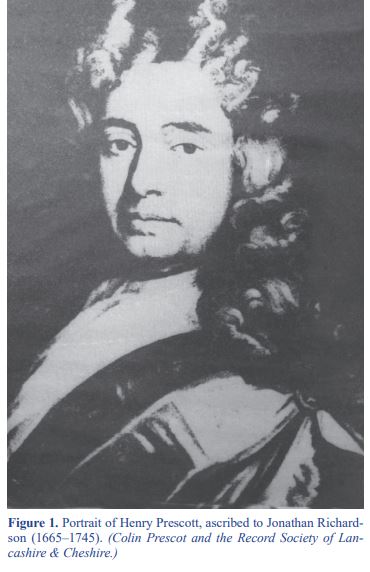 Henry Prescott kept a diary from about 1680 until his death in 1719. In it Henry details the people he met each day, the business he carried out in his work as the deputy registrar of Chester Diocese, where and how much alcohol he drank and any significant national and international news that had arrived that day. The diary is of major social history importance. Although not an amateur astronomer, Henry also recorded a number of astronomical observations in his diary after seeing spectacular events in the sky.

The starting point for the author’s investigations into these observations was the modern edition of Henry Prescott’s diary, produced in three volumes by the Record Society of Lancashire & Cheshire.1,2,3 This is available for free download from the website of the Record Society.4 The author has also reviewed the surviving parts of Henry’s actual diary, which are kept in the Cheshire Record Office.5 The Record Office additionally holds a handwritten transcript of Henry’s diary, compiled by his great-grandson Charles Kenrick Prescott.6 This includes some sections of the diary which were not available at the time that the Record Society compiled its modern edition. These additional sections amount to a further seven years’ worth of diary: an increase of approximately 45% on the contents presented in the volumes published by the Record Society. The extra contents have been checked by the author, but do not contain any astronomy-related entries.

Henry Prescott was born on 1649 Jun 9 at Rough Park near Upholland, Lancashire.1,7 Henry was the fifth son and seventh child of Thomas Prescott, gentleman, and his wife, Margaret Hey. The Prescott family were friends of Charles Stanley, the eighth Earl of Derby, having helped his father (James Stanley) raise troops for the Royalist cause during the Civil War (1642–’51). The failure of the Royalists led to the financial ruin of the Prescott family and the execution of the seventh Earl of Derby. When Charles Stanley succeeded to the estates of his executed father, he tried to help those who had helped his predecessor.

As a child Henry was probably educated with the Stanley children, and as a young man a position was found for him, with Charles Stanley’s help, in the diocesan registry at Chester around 1677. Henry’s employer was William Wilson, the deputy registrar. Wilson encouraged Henry to go to Trinity College, Dublin to read law and qualify for the registry. Henry graduated in 1682 and following the death of Wilson was appointed deputy registrar of Chester Diocese in 1686 November.7 Henry lived close to Chester Cathedral, first in Northgate Street and then the Abbey Gate.6

Henry’s boss, the registrar of Chester Diocese, was Dr Walter Pope. Pope did not carry out the registrar’s work, but deputed his administration to Henry in return for a proportion of the income: not an uncommon practice for the time. In fact Walter Pope was an astronomer and had succeeded Christopher Wren as professor of astronomy at Gresham College, London in 1662 June.8 In 1687 September, ill health led Pope to resign the professorship and retire to Epsom, although he still retained the position of registrar until his death in 1714.

Pope had been appointed to the post of registrar by his stepbrother John Wilkins (1614–1672) when Wilkins was appointed bishop of Chester in 1668. As an aside, as well as being an Anglican churchman Wilkins was an author, scientist, polymath and a founder member of the Royal Society.9 In 1638 Wilkins wrote a book titled The discovery of a world in the Moone, in which he discusses the idea of travelling to the Moon and speculates on the possibility of life existing there. Then in 1640 he published a second book, A discourse concerning a new planet, in which he supports the idea of the Earth being one of the planets in the Copernican system.

Henry married Lydia Peake, aged 27 and widow of John Williamson, in Dublin in the summer of 1682.7 Sadly she and their newborn son died at Wigan on 1685 May 18. The diary reveals how for the rest of his life Henry mournfully commemorated the birthdays and death anniversaries of Lydia. On 1687 Aug 11 he married Susanna Puleston, aged 20, daughter of Sir John Puleston of Hafod-y-Wern in Denbighshire. Between 1688 and 1707 she bore eleven children, of whom only Jack, Harry, Ken and one daughter, Margaret, survived. Theirs was a marriage of great love, reflected in a frequent correspondence during Henry’s absences on registry work, their shared participation in the social life of Cheshire, and the many affectionate references to her in his diaries.

Henry worked very hard and was an effective administrator of the great variety of detailed work carried out by the diocesan registry, ensuring that the legal processes of the Church were speedily performed. His work included making frequent visitations (on horseback) around the archdeaconry of Chester, and legal work in the consistory court. The Chester Consistory Court was established in 1541 and is the oldest surviving example of an ecclesiastical court.10 It was moved to its present location in Chester Cathedral in 1636. Such courts were responsible for the moral and religious conduct of churches in the diocese, covering issues such as heresy, matrimonial questions, probate, slander and the upkeep of church buildings and property.

Henry played a full part in the social life of the city and its county of Cheshire. Almost every day when in Chester he drank and dined with leading figures in church, city, and county life; many important people who passed through the city en route to and from Dublin took wine with him. His diary records visits to the homes of many friends and work acquaintances, as well as to about 150 different drinking houses. Henry’s consumption of beer and wine was prodigious even by the standards of the day; one or two bottles of claret (red wine) a day was not unusual. He often notes in his diary what and how much he had to drink that day and how the following day he suffered for it! For example, the entry of 1704 Jun 15 records him being with a Mr Woodward, bailiff of Liverpool, in the Fountain drinking house in Chester where ‘cheerfully we bring the matter to 17 pints of claret’. However the entry for the following day notes: ‘Extremely indisposed from the claret, the good repose most of the day’.

Today we might be tempted to consider Henry an alcoholic, but his was a time when it was probably safer to drink beer or wine than water. Also, he often carried out registry business in the evening using drinking houses as a convenient meeting place to interview witnesses involved in his legal work. Most mornings before going to work, Henry would walk off any ill effects from drinking the night before by making several circuits of the Roodee in Chester.

The Roodee is a roughly circular area of land bordered by the river Dee and derives its name from the Saxon rood, a cross or crucifix, and the Norse suffix eye, meaning an island, thus translating literally as ‘The Island of the Cross’ (see Figure 3). Henry records that the number of paces required to make a circuit of the Roodee was 1,340. Before and during Henry’s time the Roodee was, as it still is, the location of Chester Racecourse – the oldest racecourse in the country, dating back to 1540.11 Figure 4 shows detail from an engraving made only nine years after Henry’s death, showing the city of Chester surrounded by its city walls and bordered by the river Dee, with a horse race in progress on the Roodee.

Astronomical observations in the diary

Given that Henry was not an astronomer, it is perhaps surprising to find a number of astronomical events described by him in the diary. However many of the events he recorded were so spectacular that they easily captured his and the public’s attention, especially in an age when man-made light pollution was practically non-existent. These entries are now presented below using the actual words, abbreviations and spelling written by Henry Prescott. Note that the diary dates quoted are according to the Julian calendar system in use at the time.