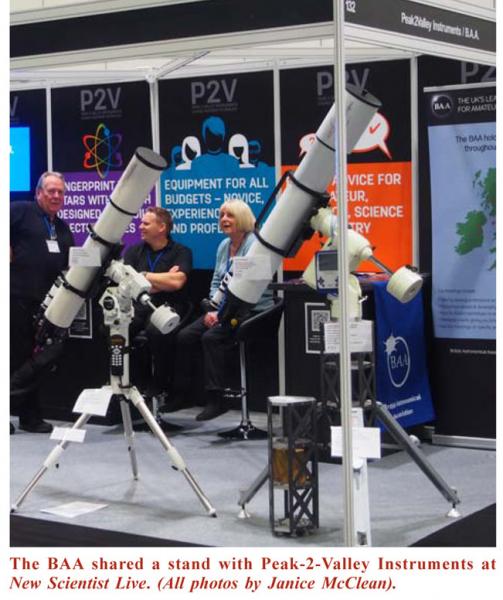 The BAA was happy to be able to share a stand with Peak-2-Valley Instruments at this year’s first ever New Scientist Live event at the ExCel Centre in London on September 22-25. The event was a huge success for New Scientist, who recorded almost 22,500 visitors and took over £1.1m in revenue. Speakers included Major Tim Peake, Nobel Prizewinner (and BAA member) Sir Paul Nurse, Dr Lucie Green who we heard at last year’s Christmas Lecture, and revered astronaut Al Worden of Apollo 15, who was able to give some guiding insights to our own Dr Richard Miles.
On a lighter note, comedian Dara O’Briain gave a presentation on Artificial Intelligence; for those of us getting older Prof June Andrews spoke on why we need not fear dementia, and for the petrol/electric/rocket propelled heads there were Tesla and the Bloodhound Supersonic Land Vehicle, which debuted at the event.
Altogether there were 155 speakers across the four themes – Cosmos, Earth, Brain & Body, and Technology. The event was mainly interactive, with opportunities to be a lab rat, test your brain age, eat bugs, sail virtual sailing ships and visit a working prototype of the ExoMars Rover scheduled to launch in 2020, which included the chance to talk with some of its designers.
The event aimed at all age ranges and it was possible to wander underneath a 1:20 scale model of the International Space Station, hurl asteroids at planets in a galactic coconut shy, and navigate the chaotic orbital spirals of a twin-star system.
During the working days of Thursday and Friday the event was mainly attended by science professionals, school science teachers and school parties, many of whom made a beeline for the Peak-2-Valley telescopes and thus were captured into the BAA’s circle. It was heartening to see the enthusiasm with which teenage students questioned our members about amateur astronomy, points of cosmology, and the finer points of physics. 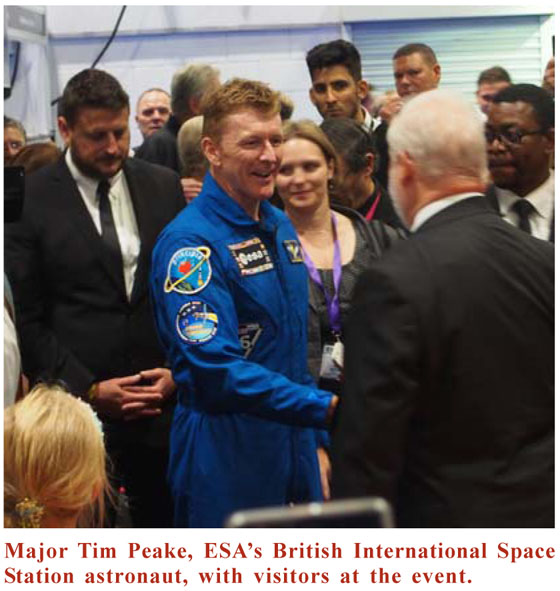 On Saturday and Sunday lots of family groups attended, and the event was packed – the talks in the theatres were seriously oversubscribed and already in next year’s plans New Scientist has announced it intends to expand within the hall space.
This was not a trade event but a chance for learning and discovery. The BAA took this great opportunity to develop its educational objectives and to bring astronomy to a curious and enthusiastic public. So many people started discussions by saying how they had bought a telescope several years ago but never used it. Much valuable advice was given, using Peak-2-Valley’s instruments for illustration. There was also great admiration for the rolling slideshow of Images of the Week from the BAA website, which were displayed to illustrate aurorae, star clusters, sunspots, moons of Jupiter etc., all imaged by BAA members.
The Association gained several new members plus some extra attendees at the following ‘Back to Basics’ workshop at the South Downs Planetarium. Many asked about local astronomy groups that they could join and this was an opportunity, well used, to promote local societies as centres of practical advice, astronomy classes, star parties and the social side to amateur astronomy.