I think the phrase might be ‘small but perfectly formed’. Perhaps not so very perfect, but we did our best with what we had.

The BAA took their own stand for the first time at the New Scientist Live event in the ExCel Centre in London Docklands this September. The show was even bigger than last year – New Scientist added an Engineering themed area to complement the Main Stage, Cosmos, Technology, Earth and Humans. The show ran for four days (September 28 to October 1) and by Saturday the event had seriously gathered momentum. All the Theatre shows had standing room only, with Cosmos talks given by, amongst others, Lucie Green, Jim Al-Khalili, David Tong and Michelle Dougherty. They were packed to the walls. Of course, everyone wanted to hear what Michelle had to say about the end of Cassini. Most of the speakers then sat down later at the Speakeasy Corner, just across from the BAA stand, and met face to face with audiences, taking lots of questions. 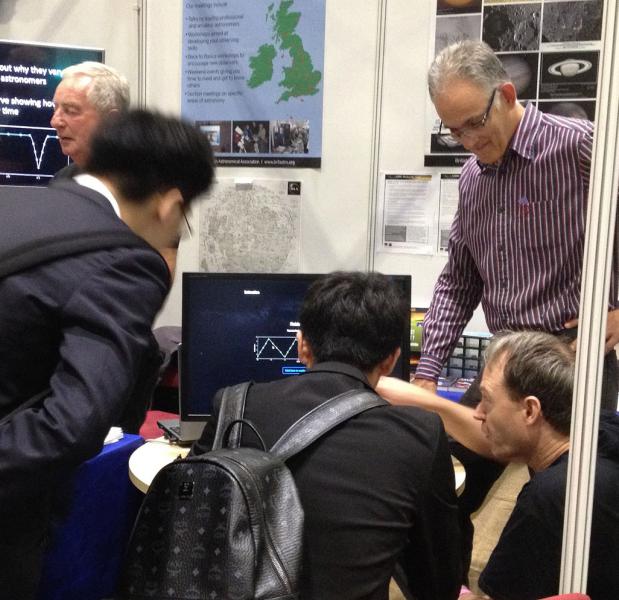 The BAA stand was supported by the Hampshire Astronomical Group, Newbury Astronomical Society, Crayford Manor House AS and Flamsteed AS, who ran excellent interactive activities such as how to identify types of variable stars, telescope use, imaging and spectroscopy. The CfDS joined in and Bob Mizon gently entrapped young and old with his offer to let them hold a space rock. School parties on Thursday and Friday gave way to family groups at the weekend and we were all hard pushed to find enough space and time to answer all the enquiries and questions about the BAA and keep the interactive activities going too.

The Federation of Astronomical Societies’ Directory was in tatters by the end of the four days as people were directed to their local societies, and to the upcoming Back to Basics workshops and Christmas meeting. It was great to meet Carolyn Bedwell and her husband who won a pair of the complimentary tickets the BAA were given, at a raffle run at the Society for the History of Astronomy.

As this event is aimed at those more generally interested in science rather than specifically in astronomy, it is always challenging to predict what will engage the public. But it was interesting to see how many younger people engaged with the BAA: it was great to chat with so many students now choosing to study physics at school, coming to ask about observational astronomy, and getting involved in the fun side as well as the academic.

In the rest of the event it was possible to learn how to build your own drone, discover why humans can speak but animals cannot, see how the Exomars rover is developing, and find out if there will be a cure for ageing. There were virtual reality tours on roller coasters, and of the inside of our own bodies, and it was truly memorable to see a group of at least 20 children all studiously engaged in flint knapping, instead of walking about with their noses stuck to their mobile phones. I will never forget the sound they made.

This year Helen Sharman joined Tim Peake and Al Warden on the Main Stage, but there was no chance to take a break from the BAA stand and get a few trophy photos. It was possible to see, broadcast across the hall screens, a live link with the International Space Station.
By the end of Sunday, everyone was exhausted but absolutely elated by the whole buzz of the event. It seemed to have gone by in a flash, but already New Scientist are asking if we want to do it all again next year. I need a holiday first though.