The BAA Summer Meeting: Cosmology today — Probing the dark side of the Universe 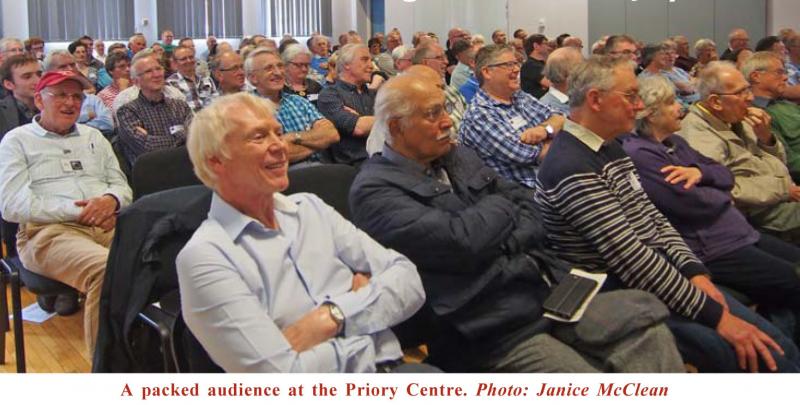 The Summer Meeting was held at the Priory Centre in the City of York on Saturday July 2. Our hosts this year were the York Astronomical Society. On Friday evening  Association members were invited to the York Society’s monthly evening meeting, when the guest speaker was Dr John Mason, speaking about his travels to see the Northern Lights. He illustrated the various visual aspects of aurora displays with spectacular images that he had obtained over the years, and explained the processes involved in causing the various displays. His experience has shown that to see good displays one needs to travel to near the Arctic Circle when the nights are dark, and of course with limited moonlight, between the end of September to March. Sunspot activity is not necessarily a guide to activity; good displays can be seen throughout the solar cycle. To have a chance of a good event, look for coronal holes and a disturbed solar wind. Dr Mason advised keeping exposures short and using higher ISO rates, i.e. up to 3500, to reveal fine details in the aurora.
The Chairman of the Society thanked Dr Mason for his talk after many questions were well answered. 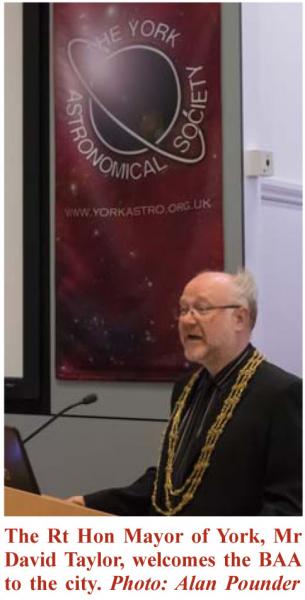 On Saturday morning the Association’s meeting was formally opened by the Right Hon. Mayor of York, Mr David Taylor. He reminded us that in York John Goodricke and Edward Pigott did their pioneering work on variable stars, within a few minutes’ walk from the meeting hall. Also Thomas Cooke the telescope maker had part of his factory even closer to this meeting. The Mayor and the Lady Mayoress were thanked by the Acting Chair of York Society, Martin Whipp, who introduced BAA President Dr Jeremy Shears to start the meeting. Jeremy thanked the York Society, hoped that the 150 or so attending would have an interesting day, and asked Dr John Mason to chair the proceedings.
The first speaker was Prof Sean Paling of Sheffield University, Director of the Boulby Deep Underground Science facility.

Deep underground science at Boulby Mine:  The search for Dark Matter
Boulby Mine, a working potash and salt mine owned by Cleveland Potash Ltd., houses a laboratory at a depth of 1100 metres. This provides a quiet environment with very low natural background radiation, ideal for searching for 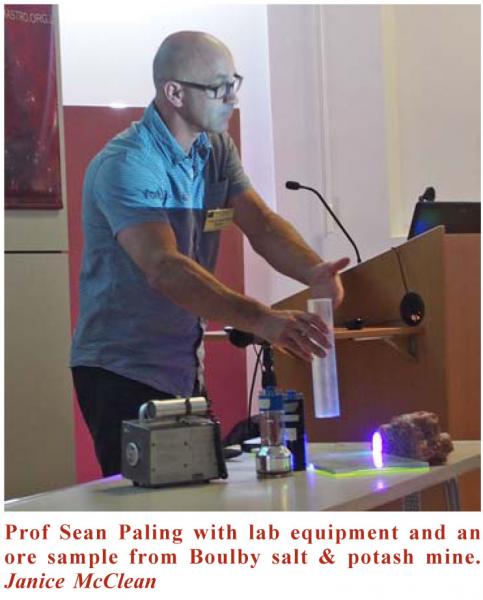 particles called WIMPS (weak interacting massive particles) which could be a constituent of dark matter. The potash mine provides about a million times reduction in cosmic rays compared with the surface. Boulby is the deepest working mine of any type in Europe, and to reach the laboratory the seven working staff take about seven minutes to make the drop to 1100m and then have a 20 minute walk, all at a working temperature of a constant 35°C.
The particle detectors, installed in the late 1980s, have yet to discover suitable particles but with other detectors around the world are homing in on possible dark matter.
The morning continued with Dr Simon Dye from the University of Nottingham.

Weighing galaxies and clusters using gravitational lensing
Dr Dye began by reminding us that Fritz Zwicky in the 1930s first deduced the presence of missing mass in galaxy clusters. In 1939 Horace Babcock investigated radial velocities in M31, and this work was continued in the 1960s by Vera Rubin and others, all showing that there must be a dark halo of matter around galaxies, possible 90% of the mass that appears to be missing. Dr Dye explained that galaxies and clusters of galaxies can be ‘weighed’ by using them as a means of gravitational lensing, an effect predicted by Einstein in 1915. Images of the gravity lensing effect showed curved arcs and rings around the clusters.
To estimate the mass and identity of the object that has been lensed is not straightforward. The techniques used by Dr Dye are to create computer models showing differing results and compare these with what has been observed. We currently know about 150 lensed galaxies; it takes about a week to calculate each model. However when the next generations of large and space-based telescopes come online the number known may be tens of thousands, so new means of automatic reduction of the data are being developed.
Dr Mason then introduced Martin Whipp, acting chair of the York Astronomical Society, who spoke about the group which was formed in 1972 and has by now had over 900 meetings. They meet at the Priory Centre once a month, and normal attendance is about 30-40. The local racecourse is used for public observing events, and they also have a site at the nearby glider airfield. A new observatory has recently been completed at Lime Tree Farm, a dark site where they have installed the 24-inch [610mm] reflector built by John Wall, and originally housed by the Crayford Manor House society.
After lunch Dr Mason introduced the next speaker, Dr Giles Hammond from Glasgow University. 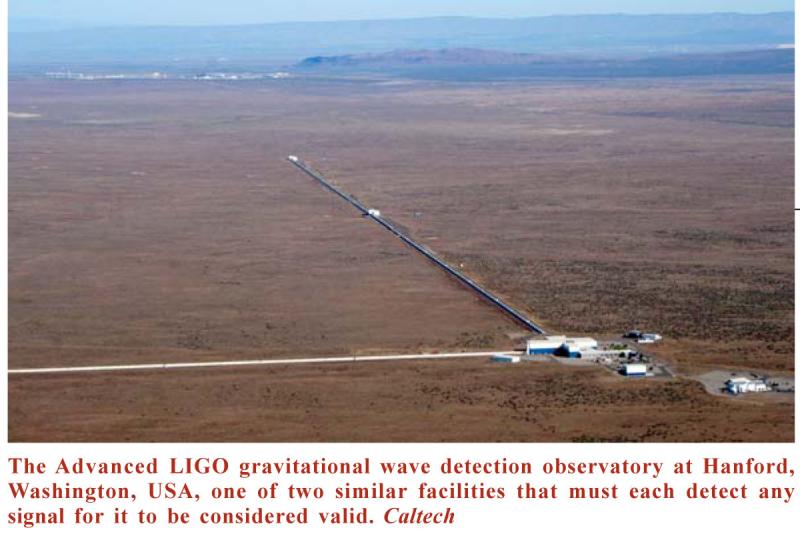 Advanced LIGO & gravitational wave astronomy
Dr Hammond’s talk was very topical as it had just been confirmed that the first gravitational waves, labelled GW150914 and GW151226, had been detected by the Advanced LIGO gravitational wave observatory in the US. He explained that to generate gravitational waves, which travel at the speed of light, very large masses and interacting velocities are needed. The first attempts to detect these waves go back to the 1960s using large cylinders of aluminium, hoping for these to resonate with the interaction of the waves. The current detectors are interferometers using high-powered lasers which fire through 4km long tubes to the interacting mirrors. The detectors need to remove seismic effects as well as quantum noise. The quartz mirrors, each weighing 40kg, are suspended on quartz fibres.
The first detection was made on 2015 September 14 and is thought to have been caused by a binary black hole merging. The event produced 3.6´1056 ergs/second of energy, i.e. about 3 solar masses-worth in 0.15 seconds. Dr Hammond finished by explaining that future work with spacecraft will investigate differing energies of gravity waves.
The afternoon continued with Dr Rita Tojeiro from St Andrews University.

Mapping the Universe, from bright stars to dark energy
Dr Tojeiro started with the current cosmic model, the big bang followed by inflation, which brings us from the first stars and galaxies to today, all in 13.82 million years. We assume that general relativity is true throughout and the Universe is the same everywhere. Surveys such as the Sloan survey can model the Universe in three dimensions, as it provides spectra to give distance. This survey of 1.5 million galaxies and some 350 quasars has provided a framework of the universe. This data can provide independent measures of the scale of the Universe; all we need is a standard ruler. CMB data provides this ruler as it was frozen into the CMB at the time of the Big Bang.
Data from the BOSS survey (Baryon Oscillation Spectroscopic Survey) can provide a measurement of the expansion of the universe. The result is confirmation of the Lambda Cold Dark Matter (LCDM) theory, confirming the current cosmic model.
During the tea break opportunity was given to view the trade stands and BAA sales, while eating cake decorated with icing of the BAA logo and that of the York AS.
The final speaker was Harley Katz from the Institute of Astronomy at the University of Cambridge.

Galaxy formation:  Theory vs. observation
What makes up a galaxy: stars, gas, planets? There is also dark matter and black holes. We can observe galaxies at many wavelengths but we of course cannot see dark matter. The effects of dark matter are known from galaxy rotation and from observations of the Bullet Cluster. Processes which regulate galaxies include gas outflows, supermassive black holes and gravity. When modelling galaxy formation all these and others need to be included.
Developing these models has produced simulations of all the visual forms that can now be seen. These models work well on the larger scale but problems exist with small scale details which need to be understood. One problem for example is the observed lack of satellite galaxies. This could be corrected by introducing ‘warm’ cold dark matter, but other observations rule this out. Harley Katz described other examples of galaxy models and possibly solutions before finishing his talk.
John Mason closed the meeting, thanking the speakers and thanking them all for keeping to time. A short break allowed a raffle to be drawn, with prizes supplied by the trade stands Peak2Valley, W&W Astro, and BAA Sales. Dr Jeremy Shears thanked John Mason and Hazel Collett for organising the meeting, our hosts the York Astronomical Society, David Boyd and Ann Davies on the sales stand and Maddy Davey of the BAA office behind the scenes taking bookings and handling queries.
The meeting was closed and members left after a most enjoyable day in the City of York.