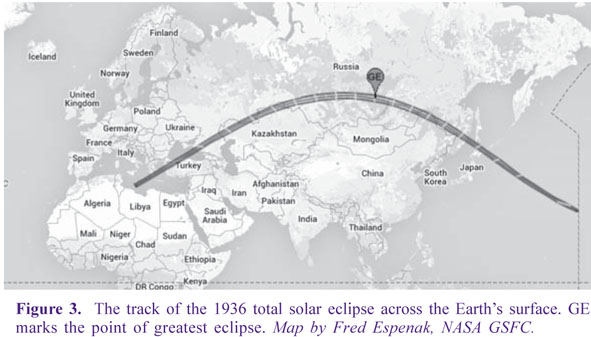 The eclipse of 1936 June 19 was especially attractive to British travellers for a number of reasons. Firstly, the track started in the Mediterranean, a favourite destination for many cruise ships of that era, especially in the summer, and so it was within a few days sailing time for determined British eclipse chasers. Also, being in June, there was far less chance of bad weather scuppering the travel plans of those wishing to make the trip. By 1936 the years of the Great Depression were over and financial optimism had returned to Europe and the USA. Indeed, many with the financial resources were travelling to Berlin that summer to see the German head of state, Adolf Hitler, open the Olympic Games on August 1.

Of course, the start of the second World War was only 3 years away at that time and had the eclipse occurred a few years later such a trip would have been impossible, but in 1936 the situation in Europe was relatively calm and cautiously optimistic, despite Hitler’s forces reoccupying the demilitarised zone in the Rhineland in March of that year, in violation of the Versailles Treaty. The 1936 June 19 eclipse was a member of Saros series 126, being the 43rd of the 72 eclipses in that Saros cycle, which started in 1179 CE and will end in 2459 CE. The more recent total solar eclipses in Saros 126 have occurred on 1954 June 30, 1972 July 10, 1990 July 22 and 2008 August 1. The next eclipse in the series will be that of 2026 August 12. This 72-eclipse series contains just 10 total eclipses running from 1882 to 2044, with the 1936 eclipse being the fourth of those ten totalities.

For the 1936 eclipse described here the umbral shadow first appeared on the Earth’s surface around 03:50 UT at sunrise in the Mediterranean and then swept rapidly east and north, clipping southern Greece (Athens was on the very edge of the umbral shadow), moving across the northwestern corner of Turkey, crossing the Black Sea, then following the present Russia/Kazakhstan border. It then passed 80km north of Novosibirsk, followed the Russia/China border and travelled over the Sea of Japan before skirting the northern coast of the Japanese island of Hokkaido, finally setting in the Pacific Ocean, very close to the International Dateline, at around 06:50 UT (Figure 3). Greatest eclipse occurred in Siberia at 05:20 UT at +56° 7.9′ N and 104° 42.5′ E, where the path width was 132.2km and the duration 2 minutes 31 seconds. (Note: I specifically mentioned Novosibirsk because the 2008 August 1 total eclipse also crossed that area, where a number of BAA observers, including myself, were situated.)…. (continued)