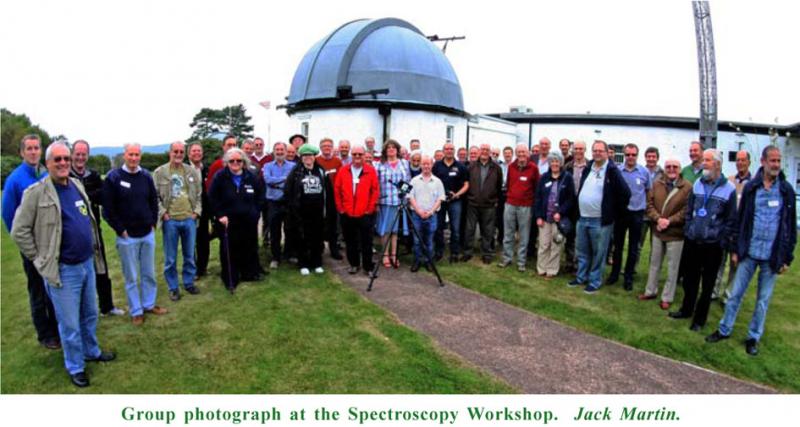 The attendance of fifty participants at the BAA Spectroscopy Workshop, held at the Norman Lockyer Observatory (NLO) in Sidmouth, Devon on October 10, was a testament to the increasing interest in this fascinating aspect of astronomy. People had come from far and wide to attend the meeting. One of our speakers, Olivier Thizy, had travelled from south west France, and another, Robin Leadbeater, came down from Cumbria.

Olivier Thizy is a director of Shelyak Instruments and is passionate about spectroscopy. He launched the proceedings with his subject of ‘Why we do Spectroscopy’. He showed us the construction of his Alpy slit spectrograph, and demonstrated the contrasting line profiles obtained from the blue and golden components of the double star Albireo. He went on to demonstrate how to obtain a Planck curve from the data, and hence how we can work out the temperatures of these two stars. Olivier then covered the subject of the bright emission line stars such as Gamma Cas and Beta Lyrae which had been discovered in 1866 by Father Angelo Secchi. He explained that this emission, seen as bright lines, was caused by re-emitted energy expelled from a disc of matter surrounding each of these stars.

Robin Leadbeater is one of the UK’s leading amateur spectroscopists and talked next on ‘How we do spectroscopy: preparation, acquisition and data reduction’. Robin started his presentation by explaining about the different types of spectrographs currently available. He showed that slit spectroscopy, compared with an SA100 grating, gave greater spectral resolution but with the sacrifice of less light transmission. In addition, spectrographic performance is affected by telescope aperture and the focal ratio. Mirror slit guiding is currently the universally adopted solution for focusing and guiding. Robin went through the basics of using the spectral analysis software ISIS, and showed how to produce an instrument response curve and a rectified spectrum. Some projects he highlighted included high cadence differential spectroscopy of the fast transient T Tauri star DN Tau, which was imaged every 15 minutes. In this case data was obtained using a low resolution slitless spectrograph. He also showed how to use an Alpy 200 for identification of supernova types.

Andy Wilson’s talk was titled ‘My first steps in spectroscopy’, and considering that he had started just 12 months before, the quality of his spectra showed that he has already mastered the subject. His equipment includes a Littrow spectrograph L200, and a LHIRES III in conjunction with a SXVR-H694 CCD. Andy described the process of focusing and positioning the star on the slit, and processing the spectrum, including correcting for tilt and slant. He showed examples of some of his interesting targets, including Kappa Cyg, Rho Persei, Chi Cyg, AG Peg, M42 and Comet Lovejoy.

David Boyd’s talk was titled ‘Observing with a LISA spectrograph’. David is another of our leading UK spectroscopists, regularly submitting his data to professional projects. His equipment includes a LISA spectrograph in conjunction with a Celestron C11 and an SXVR-H694 CCD. David showed us how he flux-calibrates his data with a view to monitoring changes in the energy output of a star over time, or to detect changes in the energy distribution across the spectrum. He also showed how to correct for interstellar extinction and reddening. Some examples he showed included an outburst of SS Cyg, and the peculiar eclipsing binary V Sagittae. The last part of his talk demonstrated that it is possible to measure radial velocities of stars with a LISA spectrograph.

This intensive workshop ran from 11:00 a.m. to 6.00 p m, however with a one hour break for lunch there was a chance to have a look at some of the historic prismatic cameras and equipment at the NLO, that were used by Norman Lockyer and his colleagues some 100 years earlier. Our thanks must be extended to Roger Pickard and the BAA for organising this event and to our excellent speakers who have willingly shared their knowledge and made all their talks available for download from Olivier’s website: http://www.shelyak.com/dossier.php? id_dossier=36&lang=2

(BAA VSS Director Roger Pickard adds: Following the success of this meeting, we anticipate that a follow-up meeting will be held in a more central location in the UK later in the year.  Watch this space!)