The brighter comets of 2011 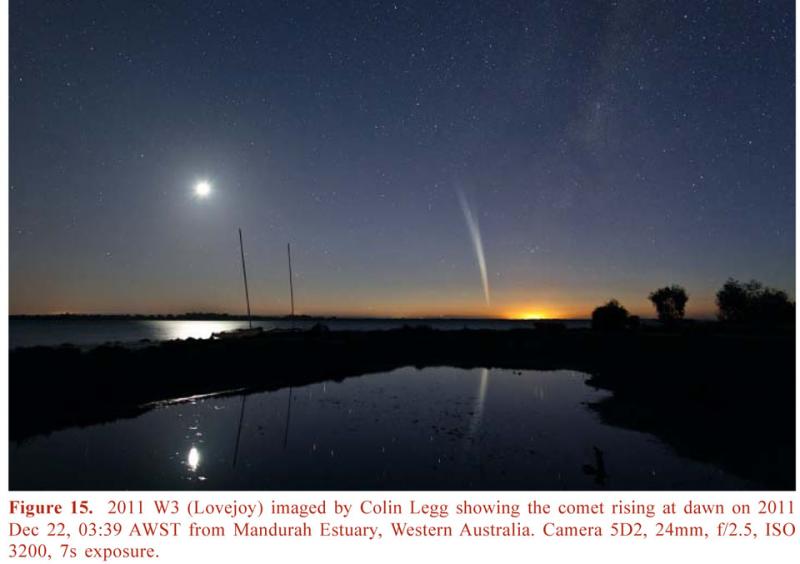 56 comets were assigned year designations in 2011 and 25 previously numbered periodic comets returned to perihelion. 220 comets from 2011 were discovered from the SOHO satellite (one a return) and two from STEREO, though some were found post-2011 in archive images. 194 were members of the Kreutz group, 12 were members of the Meyer group, four of the Marsden group, two of the Kracht group and eight were not associated with any known group. There were five amateur discoveries (2011 K1, NO1, R3, W2 and W3) for which Michael Schwartz, Paulo Holvorcem, Leonid Elenin, Artyom Novichonok, Vladimir Gerke, Claudine Rinner and Terry Lovejoy gained the Edgar Wilson Award. Seven periodic comets were numbered. One comet was reported as visible to the naked eye during the year.
Orbital elements for all the comets discovered and returning during the year can be found on the JPL Small-Body Database Browser, which will also generate ephemerides. Discovery details and some information for the other comets found or returning during the year are available on the Section visual observations web pages, which also contain links to additional background information. The raw visual observations for the year are on the Section visual observations web pages in ICQ format and are archived in the Comet Observations Database (COBS). The full dataset from COBS is used for the multi-return analyses presented here, but otherwise analyses use only those observations submitted to the Section. Additional images of the comets are presented in the Section image archive. (continued…)(Login or click above to view the full illustrated article in PDF format)