The brighter comets of 2013 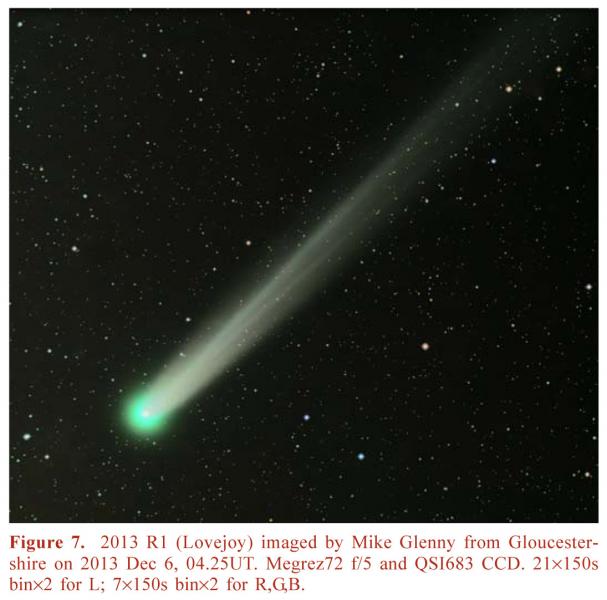 Introduction
78 comets were assigned year designations for 2013, and 34 previously numbered periodic comets returned to perihelion. 218 comets were discovered from the SOHO satellite during 2013, with one Marsden group comet returning, and 16 from STEREO, though some were from earlier years that were found in archive images. Only three were given year designations. 211 were members of the Kreutz group, 14 were members of the Meyer group, one of the Marsden group (the return), one of the Kracht group and eight were not associated with any known group. There were 14 amateur discoveries (2013 C2, CE31 (281P/MOSS), D1, E2, EW90, G9, H1, N4, R1, T2, U2, V2, V3 and V5) for which Paulo Holvorcem, Masuyuki Iwamoto, Claudine Rinner and Michael Schwartz gained the Edgar Wilson Award. Gennady Borisov, Terry Lovejoy, Vitali Nevski and Michel Ory may also receive the award, though at the time of writing there has been no formal announcement. 19 periodic comets from the year were numbered. Four comets were reported as visible to the naked eye during the year.

Orbital elements for all the comets discovered and returning during the year can be found on the JPL Small-Body Database Browser, which will also generate ephemerides. Discovery details and some information for the other comets found or returning during the year are available on the Comet Section visual observations web pages, which also contain links to additional background information. The raw visual observations for the year are on the Section visual observations web pages in ICQ format and also in the Comet Observations Database (COBS). The full dataset from COBS is used for the multi-return analyses presented here, but otherwise only those submitted to the Section are used. Additional images of the comets are presented in the Comet Section image archive.

2013 A1 (Siding Spring)
An 18th magnitude comet was discovered at the Siding Spring observatory, Australia, on January 3.54. Follow-up investigations led to pre-discovery observations from the Catalina Sky Survey made on 2012 Dec 8. It was discovered when still 7.2au from the Sun, and did not reach its 1.4au perihelion until 2014 October [MPEC 2013-A14, 2013 Jan 5].

The orbit had an Earth Minimum Orbit Intersection Distance (MOID) of 0.38au. It was a southern hemisphere object and was at its brightest of around 9th magnitude in early 2014 September. The comet may have experienced an outburst in 2014 November, with several observers making it much brighter than the mean curve, though the observations are a little discordant. It appears not to be a very active object. The observations are better fitted by a linear lightcurve, peaking 80 days before perihelion, though the regression is poorly constrained.

The comet made a very close pass to Mars on 2014 Oct 19 at 18:29, missing by only 0.00094au. Despite the relatively low activity of the comet it might have briefly been -3 in Martian skies, though would probably have appeared fainter than this due to the delta effect. Although NASA spacecraft imaged the comet during its close approach the images released show nothing more than a fuzzy object. This was at least in part because the orbits of the spacecraft had been adjusted to put them safely on the far side of Mars during the comet’s closest approach. An intense meteor shower was observed by the MAVEN spacecraft in orbit around Mars. The comet nucleus was estimated to have a diameter of between 400 and 700 metres and a rotation period of eight hours.

2013 C2 (Tenagra)
Michael Schwartz and Paulo Holvorcem discovered a very distant comet on 2013 Feb 14.24 at the Tenagra II Observatory in Arizona. At discovery the comet was around 19th magnitude and over 9au from the Earth [MPEC 2013-D22, 2013 Feb 17]. Perihelion was at 9.1au in 2015 August. It has a period of around 60 years. Given the distant orbit, little change in the brightness of the comet was expected, and from 2013 March to 2015 January Kevin Hills reported it at around mag 18. It seems to have brightened significantly during 2015 February from mag 17 at the beginning of the month to mag 15 on Feb 23. Then on 2015 Feb 27 it was reported at mag 14 by Marco Goiato in a visual observation with his 0.22m reflector. It brightened further,… continued