The brighter comets of 2014 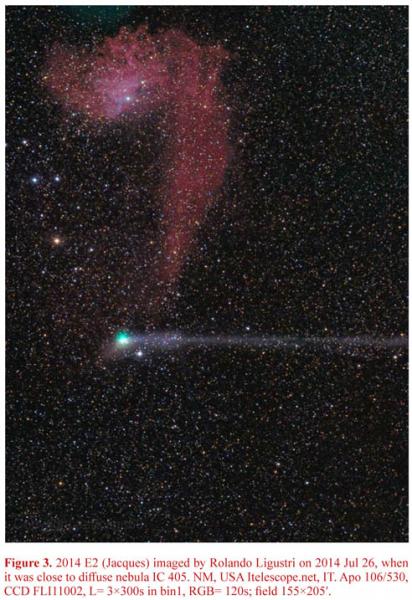 85 comets were assigned year designations for 2014, and 42 previously numbered periodic comets returned to perihelion. 195 comets from 2014 were discovered from the SOHO satellite  (three were returns) and four from STEREO. 165 were members of the Kreutz group, 17 were members of the Meyer group, two of the Marsden group, four of the Kracht group and eleven were not associated with any known group.  There were nine amateur discoveries (2014 A4, B1, C1,  E2,  F2,  Q2,  Q3,  R1  and  X1)  for which João Ribeiro de Barros, Gennady Borisov, Leonid Elenin, Paulo Holvorcem, Cristóvão Jacques,  Terry Lovejoy, Eduardo Pimentel and Michael Schwartz may gain the Edgar Wilson  Award (although at the time of writing there has been no formal announcement).

23 periodic comets from the year were numbered.  Three comets – 2013 R1, 2014 E2 and 2014 Q2 – were reported as visible to the naked eye during the year. Orbital elements for all the comets discovered and returning during the year can be found on the JPL  Small-Body Database Browser,  which will also generate ephemerides. Discovery details and some information for the other comets found or returning during  the  year  are available  on  the  Comet Section visual observations web pages, which also contain links to additional background information. The  raw  visual  observations  for  the year are on these pages in ICQ format and in the Comet Observations (COBS) database. The full dataset from COBS is used for the multi-return analyses presented here, but otherwise only those observations submitted to the Section are used. Additional images of the comets are presented in the Section image archive….(continued)
(Login or click above to view the full illustrated article in PDF format)