The brighter comets of 2015 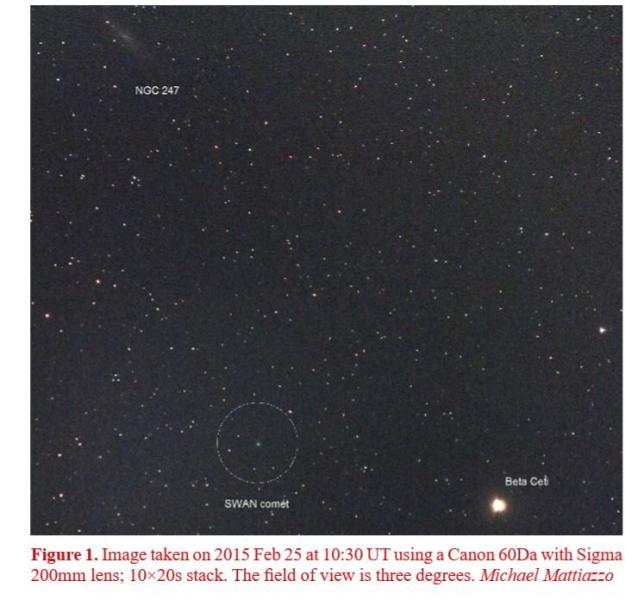 83 comets were assigned year designations for 2015 and 40 previously numbered periodic comets returned to perihelion. 228 comets from the SOHO satellite were credited during 2015, including five returning objects. 188 were members of the Kreutz group, 22 were members of the Meyer group, three of the Marsden group, two of the Kracht group and 15 were not associated with any known group. There were at least six amateur discoveries (2015 D4, F2, F4, Q2, VL62 and X4) for which Gennady Borisov, Rafal Reszelewski; Michal Kusiak, Marcin Gedek and Michal Zolnowski; Cristóvão Jacques, Eduardo Pimental, Bill Yeung and Leonid Elenin may gain the Edgar Wilson Award (though there has been no formal announcement to date).

13 periodic comets from the year were numbered. One comet (2014 Q2) was reported as visible to the naked eye during the year. In a change from previous practice, the behaviour of comets that were discovered during 2015 but will only become bright enough for visual observation several years in the future will be analysed during the year of perihelion.

Orbital elements for all the comets discovered and returning during the year can be found on the Jet Propulsion Laboratory (JPL) Small-Body Database Browser,1 which will also generate ephemerides. Discovery details and some information for the other comets found or returning during the year are available on the Section visual observations web pages,2 which also contain links to additional background information. The raw visual observations for the year are on these pages in ICQ format and in the Comet Observations (COBS) database.3 The full dataset from COBS is used for the multi-return analyses presented here, but otherwise only those submitted to the Section are used. Additional images of the comets are presented in the Section image archive.4

Rob Matson reported a comet in SWAN images taken between Feb 15 & 22. Michael Mattiazzo and Vladimir Bezugly reported the same object. Terry Lovejoy imaged the comet on Feb 25.4, estimating it at 11th magnitude. Michael Mattiazzo also imaged the comet and was able to observe it visually at magnitude +11.5. The comet was at perihelion at 0.7au in early March [CBET 4068, MPEC 2015-D110, 2015 Feb 27]. It remained at a poor solar elongation. 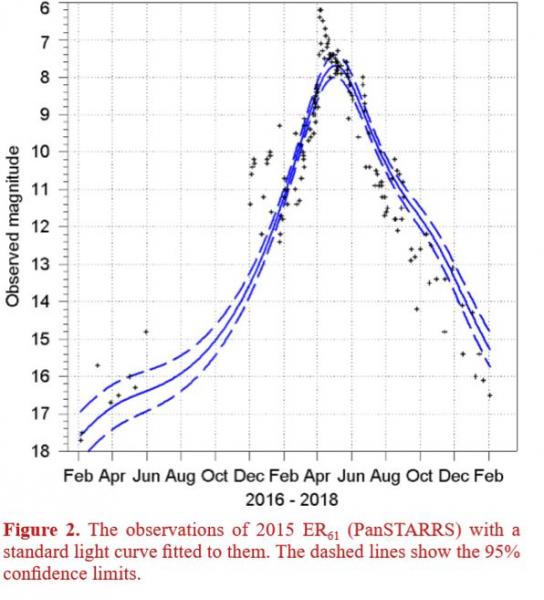 ‘I first spotted the comet in SWAN imagery on Sunday, Feb 22, when composite images were available for Feb 15, 16, 17, 18 & 19. It wasn’t bright enough to be reportable yet (particularly the Feb 15 image), but I was pretty confident it was real so started the process of converting raw pixel coordinates to RA/Dec and grabbing SOHO satellite ephemeris data for the dates in question. I could find no other known comets predicted to be at that location, so I computed a preliminary orbit. It didn’t take long to realise that my chances of acquiring it in 20×110 binoculars from southern California were poor, due to the low solar elongation combined with northern hemisphere winter. It would take more aperture and darker skies.

‘By Tuesday I had the comet in eight images; it was time to find someone on the ground who could confirm it, and to report rough positions to Dan Green and Gareth Williams. I made my usual epoch assumption for SWAN composite images (12 UT), figuring that an uncertainty of ±12h is better than the alternatives. In reality, SWAN composites are stitched together from much smaller images collected over a roughly 24-hour period, so different parts of the celestial sphere are imaged at different times. (I’ve never been able to find information about SWAN’s scan pattern, or if there is ancillary data that provides the epoch of each pixel.) I sent the eight positions to Dan and Gareth.

‘I explained that my +10 estimate for the magnitude was just an educated guess based on the comet’s moderately easy detectability in the last several images. I computed a preliminary parabolic orbit and generated search ephemerides for Terry Lovejoy and Rob McNaught, which I sent to them just prior to e-mailing Dan and Gareth. The comet appeared to be moving at about 1.6 degrees-per-day (°/d), so I advised Terry and Rob that the position could be off by ±0.8° (mostly in declination) just based on the SWAN timing uncertainty alone, and more like ±1° when SWAN’s coarse angular resolution is folded in.

‘Terry got back to me almost immediately, mentioning that he was concerned it might be too low for him and with the possibility of local obstructions, but that weather permitting he’d give it a try. At 01:39 Wednesday morning (Pacific Time), Terry e-mailed me to say he’d found it close to the predicted position – estimating the magnitude at +11 with a 2′ coma – and said it had a short, stubby tail. At this time he informed me that Michael Mattiazzo also contacted him shortly after I had, which wasn’t surprising as Michael and I have shared discovery credit on a number of prior SWAN comets. Once the CBET was out, I saw that Vladimir Bezugly (another veteran SWAN comet-finder) had also spotted the comet.

‘It will be interesting to see if the comet turns out to be periodic; when I combined ground-based astrometry with SWAN positions I got solutions that seemed to favour a 100-to-200-year orbit, depending on how much I shifted the epoch times of the SWAN positions.’

Karl Battams noted that the comet appeared tiny at first (just above the noise at about 9th magnitude) and gradually brightened as it neared the Sun. He was surprised to see that it then dramatically brightened to a magnitude of about +1.5 as it crossed into the C2 field of view, when a short, faint tail appeared (Feb 19). It remained visible for the rest of the comet’s observable passage (fading to around magnitude +6 by the time it left LASCO’s field of view on Feb 21.77).

Matthew Knight (Lowell Observatory) analysed the SOHO images and reported that the comet was first visible late on Feb 17, right at the detection limit in C3 (about magnitude +9.5 to +10), and peak brightness occurred around Feb 19.9 at an apparent visual magnitude of about +1.3. It had a much more cometary appearance during the second half of the visible apparition, with the tail seeming more distinct as it was fading. 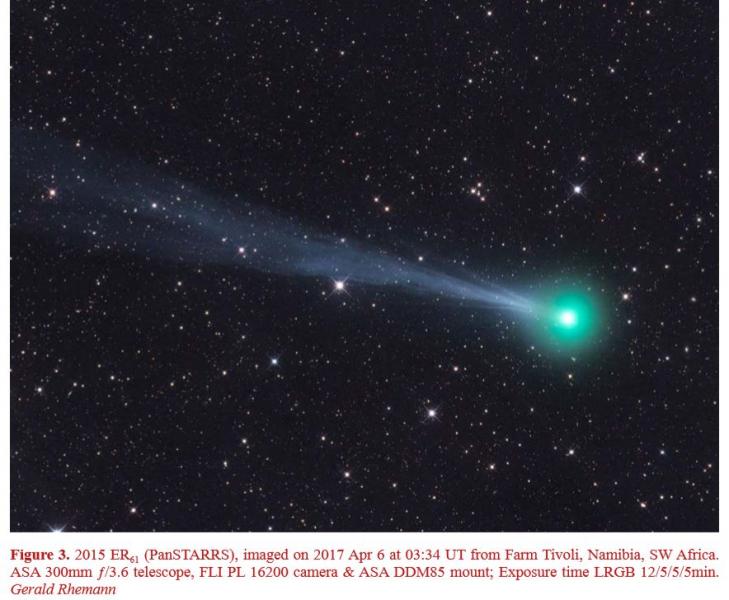