The brighter comets of 2016 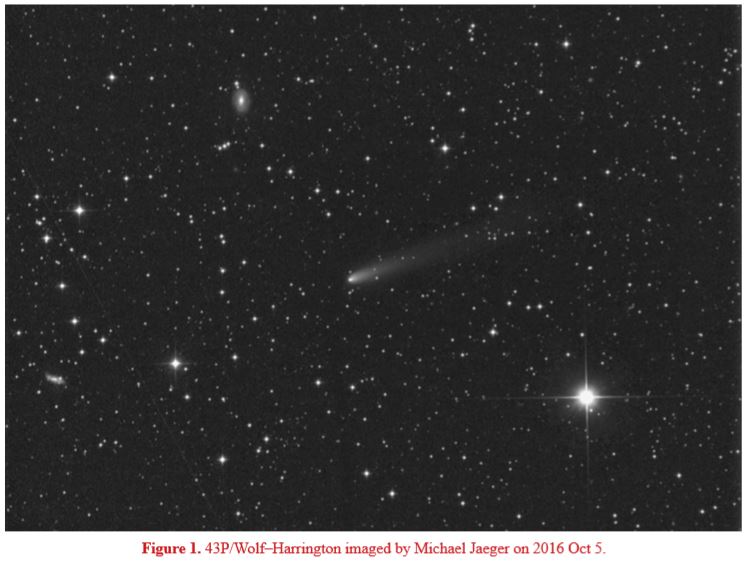 52 comets were assigned year designations for 2016 and 45 previously numbered periodic comets returned to perihelion. 168 comets from the SOHO satellite and four from STEREO were credited during 2016, including two returning objects. 160 were members of the Kreutz group, five were members of the Meyer group, none were of the Marsden group, one was of the Kracht group (a return) and seven were not associated with any known group (one a return). Two of the objects were given designations (2016 J3 and 2016 N5). There was one possible amateur discovery (2016 R3) for which Gennady Borisov may gain the Edgar Wilson Award, though there has been no formal announcement at the time of writing. 15 periodic comets from the year were numbered. One comet (252P/LINEAR) was reported as visible to the naked eye during the year. Overall 2016 was a disappointing year for visual comet observers.

In a change from previous practice, this and future reports will cover only the comets that were at perihelion during the year. Previously comets were described in the report for the year of their designation, however as sky surveys go ever deeper, comets are being discovered many years from perihelion. In order to not unduly delay publication of reports, it seems prudent to change this practice.

Where periodic comets are the subject of visual or electronic observations at five or more returns, the secular behaviour of the comet is considered, even though it may not qualify as a ‘brighter’ comet during the present return. Any evolution in behaviour is of interest, as is observation of a steady state.

Orbital elements for all the comets discovered and returning during the year can be found on the JPL Small-Body Database Browser,1 which will also generate ephemerides. Discovery details and some information for the other comets found or returning during the year are available on the Section visual observations web pages,2 which also contain links to additional background information. The raw visual observations for the year are on these pages in ICQ format, and in the Comet Observations database (COBS).3 The full dataset from COBS is used for the multi-return analyses presented here, but otherwise only those observations submitted to the Section are included. Additional images of the comets are presented in the Section image archive.4

A 19th magnitude asteroid, discovered in Pan-STARRS 1 images taken with the 1.8m Ritchey–Chrétien on Jan 22.34, was subsequently shown to have a faint tail. Pre-discovery Pan-STARRS images were then found from 2015 December. Denis Denisenko suggested that the orbit was very similar to that of 252P/LINEAR [CBET 4257, MPEC 2016-C192, 2016 Feb 15].

It is intrinsically very faint and has one of the faintest absolute magnitudes of any comet observed by the Section. Despite this, the comet reached 13th magnitude at closest approach, when it was moving rapidly across northern skies. It was imaged by radar and the observations showed that the nucleus was about a kilometre in diameter, with a rotation period of around 37 hours.

On May 26, Scott Ferguson reported to Karl Battams a comet in STEREO H1 images taken on May 14. Man-To Hui measured the images and Battams sent the astrometry to the Minor Planet Centre (MPC), who computed an orbit. Battams noted that strong forward scattering may have contributed to the comet’s brightness, which reached around 8th magnitude [CBET 4281, MPEC 2016-K41, 2016 May 31].

The comet was at perihelion on May 21 at 0.47au and has a period of 7.7 years, according to the MPC elements. The orbital elements are extremely uncertain; JPL give error bars of 1.0au in the perihelion distance and 59 years in the period. Mike Olason submitted an image of the comet taken from Denver, USA on Jul 13, although there is no astrometry from the observation used in the orbit solution.

Gennady Borisov discovered a 16th magnitude comet in images taken with the 0.3m ƒ/1.5 astrograph at the MARGO observatory, near Nauchnij, Crimea, on September 11.07. The object was confirmed by other astrometrists, including Peter Birtwhistle [CBET 4321, MPEC 2016-S03, 2016 Sep 16]. The comet was at perihelion at 0.4au in 2016 October.

Gareth Williams commented on the MPEC:

Attempts by Gareth Williams (and S. Nakano) to link the 1915 and 2016 apparitions were not successful. Trials were made for n= 0, 1, 2 & 3 intervening (missed) returns between the 1915 and 2016 perihelion passages. The two comets appear not to be the same object, but the possibility of a common origin will necessitate further investigation. The best fit JPL orbit gives a period of around 1000 years, with an uncertainty of 250 years.

Unfortunately the circumstances of the apparition were about as poor as is possible, with the comet on the far side of the Sun at perihelion. It was intrinsically very faint and Michael Mattiazzo noted that it was not visible in STEREO imagery post-perihelion; it was not seen again.