The brighter comets of 2017 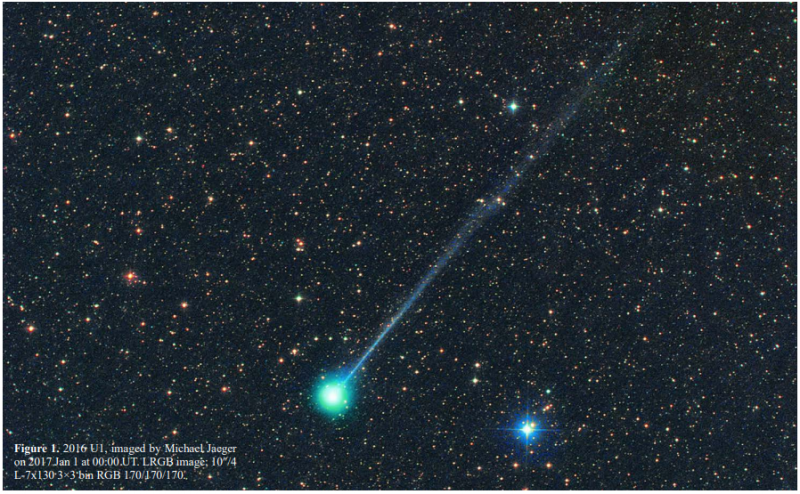 73 comets were assigned year designations for 2017 and 40 previously numbered periodic comets returned to perihelion. 228 comets detected by the SOHO satellite and 17 by STEREO were credited during 2017, including one returning object and a fragment of 96P/Machholz. 217 were members of the Kreutz group, 20 were members of the Meyer group, two were of the Marsden group (one a return), none were of the Kracht group and six were not associated with any known group (one was the fragment of 96P/Machholz). None of these objects were given a designation. There were six possible amateur discoveries (2017 A3, D2, E1, E4, K3 and K6) for which João Ribeiro de Barros, Gennady Borisov, Leonid Elenin, Goran Gasparovic, Cristóvão Jacques and Terry Lovejoy may gain the Edgar Wilson Award, though there has been no formal announcement to date. 16 periodic comets were numbered during the year. No comets were reported as visible to the naked eye. Overall 2017 was another disappointing year for visual comet observers.

The remainder of this report covers only the comets that were at perihelion during the year. When periodic comets are observed visually or electronically at five or more returns the secular behaviour of the comet is considered, even though it may not qualify as a ‘brighter’ comet during the present return. Any evolution in behaviour is of interest, as is observation of a steady state.

Orbital elements for all the comets discovered and returning during the year can be found on the JPL Small-Body Database Browser,1 which will also generate ephemerides. Discovery details and some information for the other comets found or returning during the year are available on the Section visual observations web pages,2 which also contain links to additional background information. The raw visual observations for the year are on the Section visual observations web pages in ICQ format, and in the Comet Observations database (COBS).3 The full dataset from COBS is used for the multi-return analyses presented here, but otherwise only those submitted to the Section are included. Additional images of the comets are presented in the Section image archive.4

The comet reached perihelion at 1.1au in 2017 May. The apparition was described in the report on the comets of 2015. No additional observations were received.

The comet was at perihelion at 1.6au in 2017 June. The apparition was described in the report on the comets of 2015. One additional observation came to light that had originally been reported with the wrong designation; this did not change the magnitude parameters. 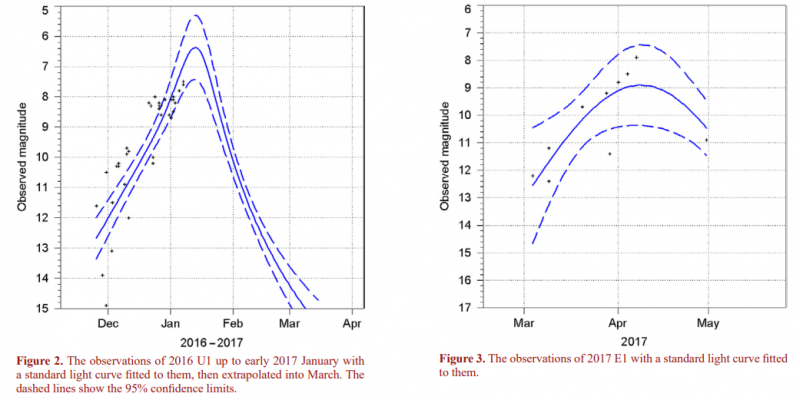 A 19th magnitude comet was discovered from the NEOWISE satellite on 2016 October 21.29, though it was estimated at some three magnitudes fainter in initial ground-based confirmations [CBET 4335, MPEC 2016-V16, 2016 Nov 3]. The comet reached perihelion at 0.3au in 2017 January, when it was poorly placed. As is sometimes the case, the magnitude from the confirming observations made with large telescopes was much fainter than that from observations made visually once the comet came within range. Amateur electronic and visual observations in late November and early December of 2016 put the comet at 12th magnitude, and it brightened quite rapidly. Visual observers made it 8th magnitude in early 2017 January, but it was then lost in solar conjunction and not seen again. By the time it emerged it would have been too faint, even if it had survived, which given the faint absolute magnitude may not have been the case.

Gennady Borisov discovered a 17th magnitude comet on 2017 Mar 1.10 with the 0.4m ƒ/2.3 astrograph at the MARGO observatory, near Nauchnij, Crimea [CBET 4369, MPEC 2017-E42, 2017 Mar 4]. The comet reached perihelion at 0.9au in April. Visual observers made the comet much brighter; around 12th magnitude soon after discovery. Unfortunately the comet became poorly placed and observations in April suggest it was somewhere between 8th and 11th magnitude. By the time it became better positioned it was too faint for visual observation.

Terry Lovejoy discovered a 15th magnitude comet in images taken with his 0.36m ƒ/1.9 Schmidt–Cassegrain (SCT) on 2017 Mar 9.68 [CBET 4373, MPEC 2017-E86, 2017 Mar 13]. The comet was soon shown to be significantly brighter than indicated by the electronic observations, with Juan José González estimating it at mag. 8.6 in his 0.2m SCT on Mar 20.21. The comet reached perihelion at 0.5au in 2017 April. It was intrinsically faint and, having reached 6th magnitude in early April, it faded and did not survive perihelion.

Goran Gasparovic, from Zagreb, Croatia, discovered a 19th magnitude comet in images taken by himself and Y. Chen with an iTelescope 0.5m ƒ/6.8 reflector at Siding Spring on 2017 May 22.60. After posting on the Possible Comet Confirmation Page (PCCP), pre-discovery images from the day before were found in Polonia Observatory images [CBET 4396, MPEC 2017-L03, 2017 Jun 1].

The comet was near perihelion at 2.3au and has a period of 13.2 years. It is of the Jupiter family of comets.