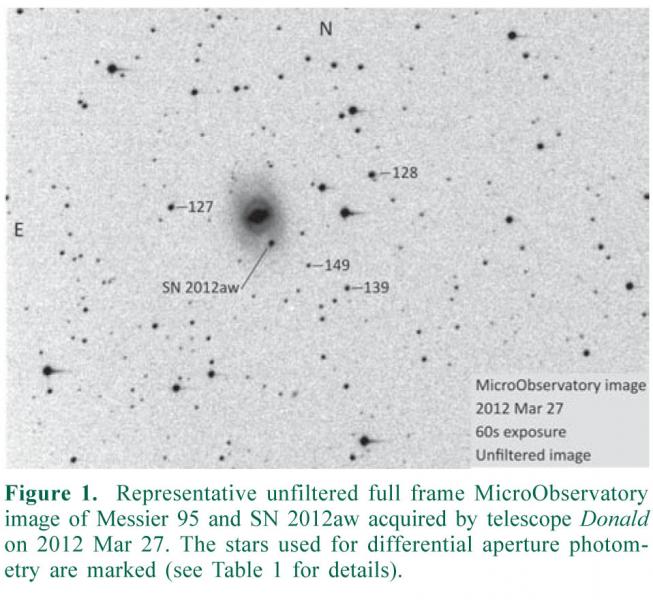 Introduction
The explosive destruction of a star as a supernova (SN) can be broadly divided into two main types of event: core-collapse (CC) and thermonuclear explosions. Thermonuclear SNe, also known as Type Ia SNe, are generally considered to correspond to the death of carbon-oxygen white dwarfs (WD) that have been pushed-over the Chandrasekhar mass (~1.4 solar masses) by the accretion of matter from a binary companion. CC SNe, on the other hand, are the final events of zero-age main-sequence stars exceeding ~8 solar masses which evolve to produce an iron-element core that can no longer be supported against gravity, and the resulting collapse leads to the cataclysmic destruction of the star and the formation of a hyper-dense neutron star or a black hole.

Type IIP SNe are a sub-class of CC SNe whose progenitors had retained substantial amounts of hydrogen before they exploded, and are the commonest type of CC SN event representing ~59% of CC SNe in a volume-limited sample. They are characterised by spectra showing strong hydrogen Balmer lines and an optical lightcurve that remains constant for about a hundred days (the plateau phase). This characteristic can be explained as a combined effect of expanding ejecta and a receding recombination layer of hydrogen due to adiabatic cooling. After reaching the end of the plateau phase, the lightcurve shows a very steep decline followed by a relatively slowly declining phase, called the nebular phase, powered by the radioactive decay of 56Co to 56Fe.

SN 2012aw was discovered on 2012 March 16.9 in the nearby barred spiral galaxy Messier 95 at an R-band magnitude of 15. With a non-detection at a limiting magnitude of R>20.7 by the Palomar Transient Factory on March 15.27, the explosion epoch can be constrained to around 2012 March 16.1 (JD= 2456002.6) ±0.8, day 0. Soon after its discovery, the SN was shown to be a young Type IIP and its photometric and spectroscopic evolution has been followed through both its plateau and nebular phases. Observations by the Swift satellite uncovered a long-lived UV plateau for the first time in a Type IIP SN. From late-time near-infrared imaging, the SN has been confirmed to have resulted from the explosion of a 12.5±1.5 solar mass red supergiant (RSG) progenitor.

In this work, I present observations of SN 2012aw using the 6-inch [152mm] robotic telescopes of the NASA-funded MicroObservatory Robotic Telescope network developed and operated by the Harvard-Smithsonian Centre for Astrophysics (CfA), together with observations submitted by others to the BAA VSS Online Database. BVRI and unfiltered lightcurves are described, together with the colour and temperature evolution of the plateau phase of the SN.  (continued…)