The crescent Venus and bright spots on the limb 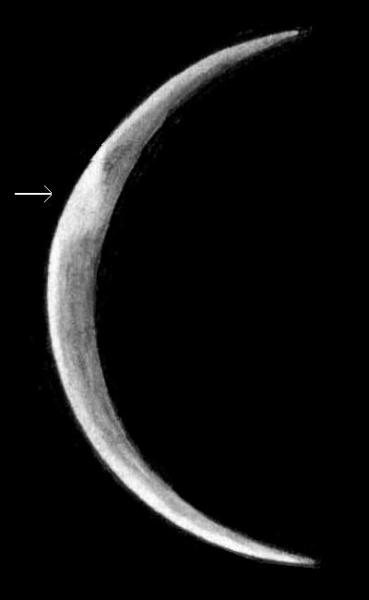 A short note about the gibbous phase of the Eastern elongation of Venus in 2013 was published in the Journal.1 The Section has now received data from 20 observers at this elongation, and if there are other observations not yet submitted, please send them to the undersigned. Some more visual data would also be appreciated. The planet was prominent in the skies around Christmastime in 2013, although its altitude in the N. hemisphere was not favourable. Inferior conjunction was reached on 2014 Jan 11.
As the planet draws in towards the Sun, the thin bright crescent normally offers only the chance to see the extended cusps, but occasionally there are other phenomena, and in 2013 December three observers saw specific light patches at the limb.
First, Raffaello Braga (90mm OG, x125, green filter, Milan, Italy) on 2013 Dec 13 (14:30 UT) sketched an elongated, brighter area upon the central part of the bright limb. Later in the month, Alan Heath was observing from his home in Long Eaton, Notts., and the Director (on holiday) from a Czech town north of Prague. On Dec 31, Heath (203mm SCT, x117, 16:45 UT) observed the fine crescent of Venus under conditions of rather unsteady seeing. He sketched a bright patch just S. of the equator, as illustrated here. A similar patch was noted by him, with less certainty, on 2014 Jan 2 (16:25UT) in the same area. Heath was specifically checking the terminator, having observed a bright patch at similar crescent phase on 2001 Mar 19.2 On the latter occasion the bright feature was confirmed upon a CCD image taken by Cliff Meredith.
Independently of Heath, the Director was observing on Dec 26 (70mm OG, x58, x175, 15:10-15:45 UT) and saw a bright limb area at and just N. of the equator, rather larger than that figured by Heath. After dark, the brightness of the crescent can dazzle the eye and make observation uncertain, but the image was not too bright on any of the above occasions. The Director observed again on Dec 27 without seeing any specific bright patch, and Gianluigi Adamoli (Verona, Italy) also saw no limb region of differing brightness on that date. The timings imply that the Dec 26, Dec 31 and Jan 2 sightings were all different objects, though there is a small chance that the Dec 13 and Jan 2 features could have been the same one, separated by an integral multiple of the four-day upper atmosphere rotation period. Massimo Giuntoli (Montecatini Terme, Italy) observed on Dec 31 with a 127mm MKT, in unsteady seeing, without recording a specific bright patch.
Adamoli was able to follow the planet closer to the Sun than the writer, and recorded long cusp extensions which seemed to extend to the full circle on Jan 6. He also obtained glimpses of the controversial Ashen Light – both with and without an occulting bar – on Dec 29 and 31. Significant cusp extensions were also recorded by Giuntoli on Dec 31 and Jan 6.
The writer would be interested to hear of similar observations around inferior conjunction, confirmatory or otherwise.

Image: Venus drawn by Alan Heath on 2013 Dec 31. South is top and the bright limb area is arrowed.