The deep-sky delights of Hydra

Hydra, the water snake is – rather appropriately – a sprawling constellation of the spring sky, covering almost six hours of right ascension. Despite being the largest constellation in the sky, its low declination from the UK means that it is not at all prominent. While its tail culminates at only 10° above the horizon, its head performs better, reaching an altitude of around 40°. An additional problem, if you are trying to locate this straggling constellation from a light polluted sky, is that with the exception of its leading star Alphard (alpha Hydrae) at second magnitude, no stars are brighter than mag +3.0. Nevertheless, despite these problems it is a constellation worth seeking out for the eclectic mix of deep sky objects that it contains.

In mythology Hydra represents the multi-headed monster slain by Hercules in one of his 12 labours, and the monster’s head is one of the most prominent features of the constellation. The easiest way to locate it is to extend an imaginary straight line from theta Leo (the Lion’s rear hip) to Regulus, and beyond to a point below Cancer. A small pair of binoculars (say 10x50s) will frame the six stars of the head nicely. Because the constellation covers such a wide range of right ascension, careful planning will be needed in the brightening skies of early April to locate the objects mentioned here; by mid-month there are only six hours of darkness between the end and start of astronomical twilight.

Having found the ‘head’ in binoculars, drop down 12° to the south-west and the open cluster M48 should be visible. M48 is one of the ‘missing’ Messier objects, so called because there is no cluster at the position Messier recorded in his discovery observation of 1771 February. Nowadays it is generally accepted that Messier made a mistake in declination when recording his observation and the cluster he observed was in fact NGC 2548, at position RA 8h 13.8m and Dec –5° 45′. 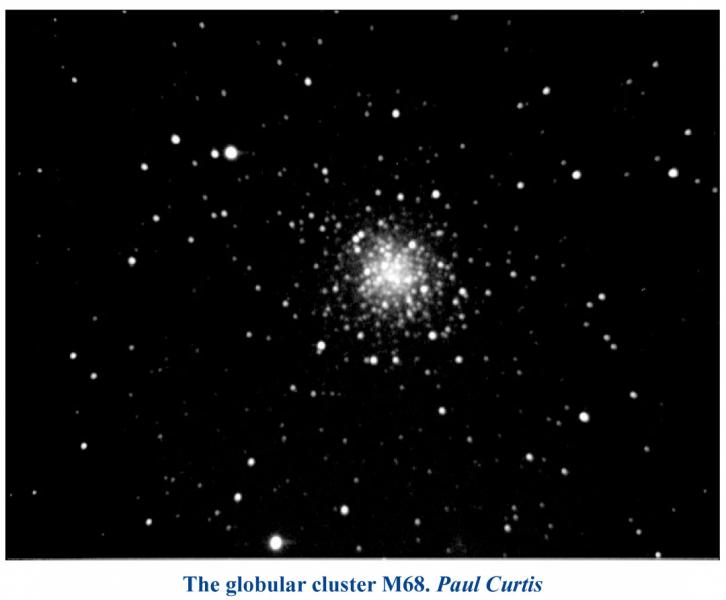 With a diameter of 30 arcminutes M48 is a pleasing sight in a small telescope, while with a magnitude of +5.8 it can even be a naked eye target from a really dark site further south, where it culminates higher. Most people see the cluster as an arrow-shaped object, but I always see it as a backward-facing question mark – open clusters are like that!

Another Messier cluster in Hydra – but this time a globular – is M68 (NGC 4590), discovered by Messier’s colleague Pierre Méchain in 1780. Messier recorded it, as he did with so many of his objects, as ‘nebula without stars.’ Located below Corvus and on the eastern side of The Crow, many people would agree with Messier’s description as it is a difficult object to resolve visually in a small telescope, needing a decent aperture and high power. It is a class X cluster in the Shapley-Sawyer classification system, meaning that it is open and loose. Lying at RA 12h 39.5m and Dec –26° 45′, it has a diameter of 11arcmin and a visual magnitude of +7.3. The image of M68 shown here was taken by Paul Curtis through his 10-inch (254mm) Meade LX200 and Starlight Xpress SXVF-MX9 camera. It is a 9-minute exposure.

There are two planetary nebulae in Hydra: NGC 2610 & NGC 3242. As far as I am aware there are no images of NGC 2610 in the Section records, but visually I observe it as a featureless irregular spot of nebulosity, about 60arcsec in diameter and only clearly visible when using an OIII filter. Its position is RA 8h 33.4m, Dec –16° 9′ and its quoted magnitude is +12. The other planetary in Hydra, NGC 3242, is probably better known as the Ghost of Jupiter, because its size is similar to that of the giant planet – although, to be truthful, so are the sizes of many other planetaries. This is a William Herschel discovery, made in 1785. 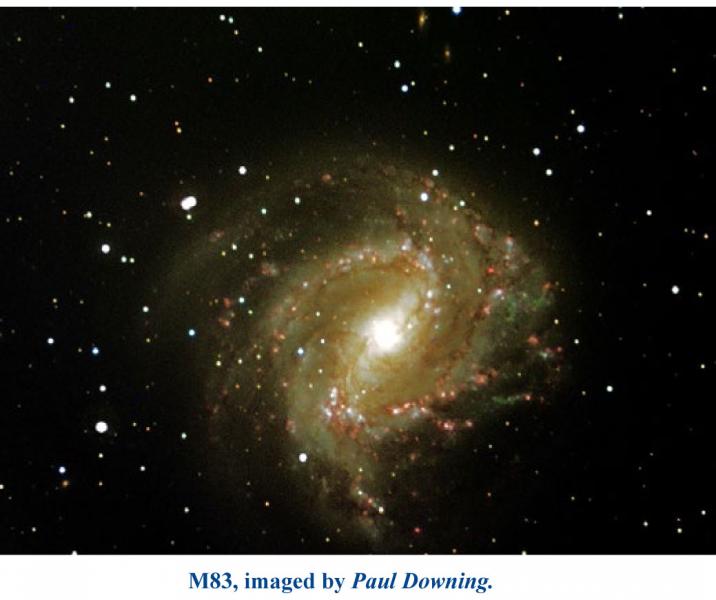 Lying just under 2° due south of mag +3.8 mu Hydrae, it is an easy planetary to locate and its small blue-green disk is very obvious in even a 100–150mm telescope, at magnitude +7.7. It is also a good object for those visual observers who don’t own a nebula filter as a filter shows no extra detail, although it will darken the sky background and make the planetary more obvious. I find it very slightly elongated NW/SE and in a larger telescope (ca. 300mm) the mag +12 central star is very obvious, inside a dark disk surrounded by a bright and slightly mottled outer ring.

Spring in the UK is traditionally galaxy hunting time. Our view at this time of the year is away from the obscuring dust of the Milky Way and out to the depths of deep space, so it is appropriate that our final object in Hydra is a galaxy.

It is a great pity that M83 (NGC 5236) is so far south as it is one of the finest galaxies in the Messier catalogue. Discovered by Nicolas-Louis de Lacaille in 1752 from the Cape of Good Hope, it was observed by Messier and added to his catalogue in 1781. He found it a very difficult and faint object, complaining that any illumination of his micrometer crosshairs caused it to disappear. One wonders what he would have made of the stunning images of M83 that are now available on the Internet.

M83 is a face on, barred spiral galaxy and a member of the Centaurus Galaxy Group. It lies around 18 million light-years distant (although some references put it much further away), and has a true diameter of approximately 100,00 light-years. Lying at the eastern end of Hydra (RA 13h 37m, Dec 29° 52′), it culminates around midnight UTC from the UK, about 7° above the horizon.

Messier, observing from Paris, had a slight advantage in declination, although hopefully most modern observers have superior telescopes and eyepieces to the ones he had access to.

With a visual magnitude of +7.6 and a diameter of about 15arcmin it sounds an easy object, but with such a low declination it will never be particularly easy from southern Britain. I have glimpsed it, just, from the UK in a 14-inch (355mm) Dobsonian as a hazy patch, with a slightly brighter centre. However, observing from Tenerife using a 24-inch (610mm) telescope and with the galaxy many degrees higher in the sky, it was a stunning sight displaying a bright core and bar, with easily traced spiral arms. Unfortunately, for galaxies nothing compensates for elevation, aperture and sky transparency.

For star hoppers trying to locate the galaxy, a good starting point is at the two eastern end stars of Hydra, mag +3.2 pi Hydrae and mag +3.0 gamma Hydrae. The galaxy lies just under 5° south of a line joining these two stars, half a degree south-west of a mag +5.8 star. Paul Downing, observing from his site in rural southern Spain in 2008, imaged M83 using his Celestron C14 and SBIG ST-10 camera. The bar, core and spiral arms are very prominent in his image.

As always, if you observe any of the objects mentioned here, do send your observations to the Deep Sky Section for retention in the Section archives.