The eastern & western elongations of Venus, 2007–’17 II. The nocturnal hemisphere

This paper, which is a continuation and sequel to Part I, deals with nightside phenomena. We covered seven inferior conjunctions (IC), with the observers and elongations listed in Part I. Our observations of the nightside infrared thermal emission (IRTE) were all made within the near-infrared (λ~ 780–2500nm), typically with a 1-micron (μm) filter; at this wavelength the atmosphere of Venus is translucent. Some observers experimented with filters having a different passband. 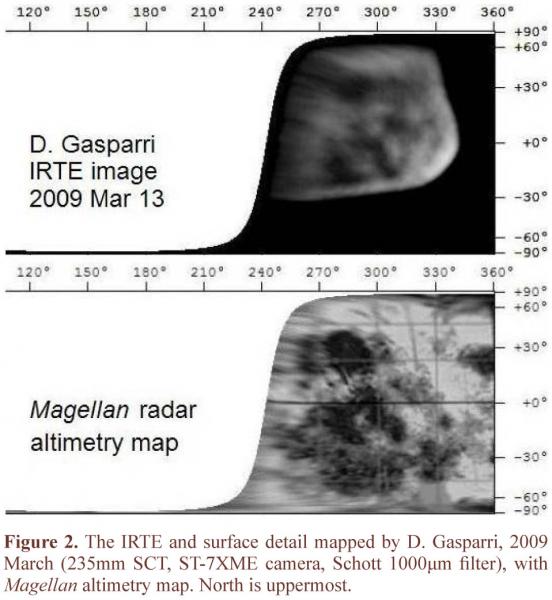 A highlight of the previous eight-year cycle had been the first amateur imaging of the IRTE, in 2004, with some indication of coarse surface topography. To avoid excessive irradiation, such data can only be obtained at a narrow crescent phase, yet not too close to IC. The dark patches most easily captured during the evening elongations correspond with elevated (and cooler) terrain about Beta Regio and Phoebe Regio.

That the same features are observed at every inferior conjunction is plain from Figures 1–4. Gasparri was able to identify as many as seven surface features, and for the present report recognised nine. Willem Kivits drew attention to the IRTE being visible even in daylight, with phase as high as 50%. However, most observers found it more convenient to wait till after sunset. At IC in 2017 through use of special equipment, and in particular a narrowband IR filter, Phil Miles & Anthony Wesley were able to achieve remarkably high resolution in the IRTE, revealing several compact bright spots that rotated with the ground. These bright spots might be interpreted in terms of active volcanism, as discussed later…. (continued)