The eastern & western elongations of Venus, 2007–’17. Part I. The sunlit hemisphere 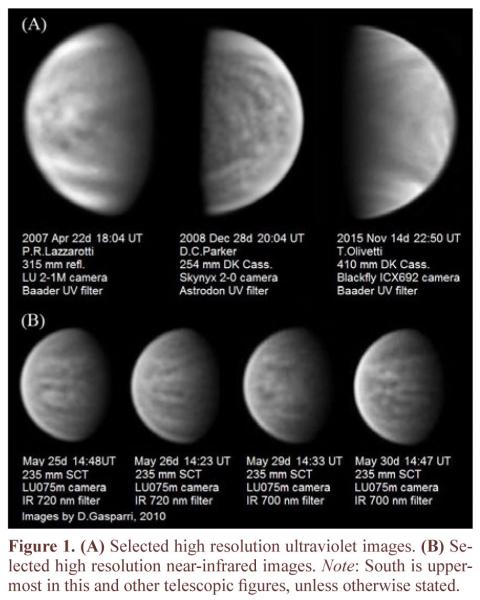 Viewed in certain wavebands, Venus offers much intriguing telescopic detail (Figure 1). After eight terrestrial years, the planet returns to almost exactly the same place in the sky, with the same geocentric phenomena recurring 2.5 days earlier in the next ‘cycle’.
We have previously analysed and compared ten successive elongations for 1991–’98, and ten more for 1999–2006. In order to bring our work up to date, we now analyse 14 elongations (seven eastern and seven western) from 2007E–2017W (2006 Oct 27 till 2018 Jan 9), falling within the Directorship of the first author. Numerous observational notes and short reports have already appeared in the Journal, including the annual Council Reports.
In 2006 the Section was asked by the European Space Agency (ESA) to coordinate the initial ground-based support for the Venus Express (VEX) mission; there was an excellent response from observers. The then-Director forwarded batches of Section images to ESA. Later, contributors could upload images directly to the VEX website (as ever, only those contributed directly to the BAA are analysed here). This report covers the whole span of VEX, which proved to be remarkably enduring. The craft’s fuel reserves were exhausted by late 2014, and the mission was terminated by the entry of the craft into the planet’s scorching atmosphere. For a time, only ground-based observations monitored Venus, until the arrival of JAXA’s Akatsuki (also known as Venus Climate Orbiter) in 2015 December.
During the 2007 eastern elongation (2007E) it was established how the markings recorded in images varied systematically with wavelength across the visual waveband, a phenomenon long known to visual observers. The best drawings through blue or violet filters resemble ultraviolet images. A useful review of UV imaging was written by Sean Walker, while others have described previous improvements in techniques.
At inferior conjunction (IC) in 2004 & 2012, Venus was in transit across the Sun. The BAA observations have been previously reviewed in detail, and are not discussed here.
For Part I, Leatherbarrow analysed the extensive visual data for the 2007 E. elongation and deduced the date of apparent dichotomy graphically. Abel plotted phase data for the nine following elongations to determine dichotomy dates, while McKim dealt with the rest. All laboriously searched the Section image database and ALPO Japan online archive, to find matches suitable for obtaining rotation periods. McKim was responsible for the analysis of the bulk of the data, and drafted the text of the report. All the authors reviewed and revised it.
Part II will discuss observations of the nocturnal hemisphere.

Observers and elongations
Table 1 (p. 75) lists 153 contributors, with key dates given in Table 2. Jean Meeus published the angular separation between the centres of Venus and the Sun at IC (Table 3).
We much regret the passing of Richard Baum, Peter Grego, Walter Haas, Willem Kivits, Roy Panther and Don Parker. Baum joined the Section in 1950 (under its first Director, Henry McEwen) and was later to lead it with distinction. Haas first contributed to the Section in 1936 and had been its longest-standing member.
Credit must go to Gianluigi Adamoli and Detlev Niechoy for covering all 14 elongations, while the following observed ten or more: Abel, Giuntoli, Heath, Macsymowicz, McKim, Melillo and Sussenbach. Observational activity was typical, with some western elongations less well covered. Denis Put was awarded the Association’s 2013 Patrick Moore prize for his excellent Venus work as a young astronomer. This included the demanding task of mapmaking from ultraviolet imaging (Figure 2).
Eastern (evening) elongations show the sunset terminator, and western (morning) ones the sunrise terminator….(continued)