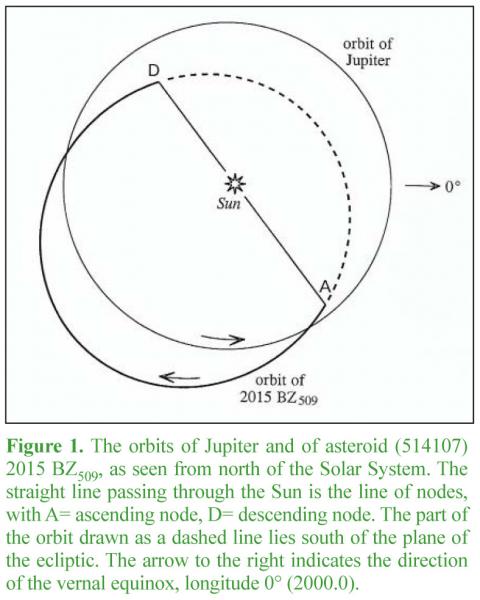 On 2015 Jan 16, by means of the PanSTARRS 1 telescope at Haleakalā, Hawaii, an asteroid of visual magnitude +21.4 was discovered in western Cancer. It received the provisional designation 2015 BZ509. It was soon found that 2015 BZ509 (which we shall henceforth refer to simply as ‘BZ’) moves in a truly strange orbit (see Figure 1). Its period of revolution is close to the 11.86yr period of Jupiter, but its motion is retrograde, which is opposite to the direction of the major planets and of most asteroids in the Solar System.

BZ was further observed in 2015 January, February, October & December; in 2016 January & August–October, and in 2017 July–September. Moreover, pre-discovery images were found, taken at Haleakalā on 2014 Nov 26. This latter date has since been adopted as the official discovery date of the object, which received the number 514107. From the observations, accurate orbital elements could be calculated, and in 2018 February, improved orbital elements were published (reproduced in the PDF).

From the absolute magnitude H, the size of the body can be deduced once the albedo (the fraction of light that is reflected) is known. Assuming an albedo of 10%, we find that the diameter of BZ is 2.5km. For a ‘normal’ asteroid, the longitude of perihelion is given by π= Ω + ω. However, as BZ has a retrograde motion, this formula should be changed to π= Ω – ω, and in this case we find π= 50°.

Some authors call BZ a ‘retrograde trojan asteroid’ of Jupiter, but this is not possible. A trojan asteroid oscillates around one of the libration points L4 or L5 of (in this case) Jupiter. As BZ has a retrograde motion, it cannot remain close to one of these points, and hence it is not a trojan.

The reader might point out that the revolution period P given differs somewhat from that of Jupiter. However, as we shall see, the orbital elements vary with time. The values given are strictly valid for one given instant: the Epoch. They can be called the elements of the instantaneous orbit. That would be the orbit that the asteroid would describe if, from the Epoch onwards, the perturbations by the planets were zero.

It is interesting to consider the motion of BZ relative to Jupiter (Figure 2). In such a bipolar diagram, the curve is the path of the body in a heliocentric frame that is co-rotating with Jupiter. In the drawing not only the Sun, but Jupiter too is considered fixed (save for the variation of its distance to the Sun). The resulting curve, then, is not the true orbit of BZ in the Solar System, but is a much more evident representation of its motion with respect to Jupiter… (continued)