The first asteroid found in 2014 collides with Earth 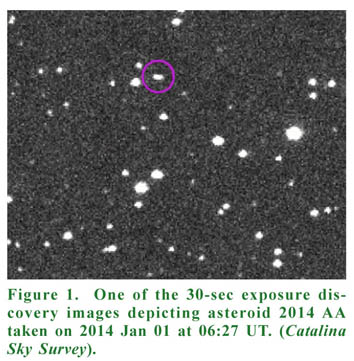 For only the second time ever, an asteroid has been discovered while heading on a collision course with Earth. The first occasion this happened was more than 5 years ago in the case of object 2008 TC3, which disintegrated in the upper atmosphere above the Nubian Desert. This time the object in question was the very first discovery of the New Year, designated 2014 AA.

Space rocks of course buzz the Earth on a frequent basis and only a tiny fraction of them cross the Earth’s path and strike the atmosphere: those that do arrive are distributed randomly in time although this one appears to have struck when most observers were off-duty – it being January 1, a national holiday in most countries. What makes it extra special is that the same person, namely Richard Kowalski, discovered both objects heading our way!

Richard started out in the early 1990s as a keen amateur with a special interest in astrometry and photometry of asteroids. In 1998, he established the Minor Planet Mailing List on Yahoo Groups, which now has some 1876 members, many of whom are professional astronomers. (If you wish to learn what has been happening with the minor bodies in the solar system then this Yahoo group is a good starting point.) In 2005, Richard joined the small group of observers working on the Catalina Sky Survey (CSS). As with his first discovery, this one was made using the CSS 1.5m reflector on Mount Lemmon, Arizona (MPC code G96). One of the discovery frames is depicted in Figure 1.

Unfortunately, Peter Birtwhistle and other UK observers were clouded out on the evening of January 1 and so were unable to catch 2014 AA during its final approach. No further observations were forthcoming and the Minor Planet Center (MPC) duly issued an electronic circular (MPEC 2014-A02) announcing the discovery and the fact that it had almost certainly hit the Earth’s atmosphere some 7 hours earlier, as shown by independent calculations by Bill Gray of Project Pluto, the MPC and Steve Chesley of the Jet Propulsion Laboratory (JPL). 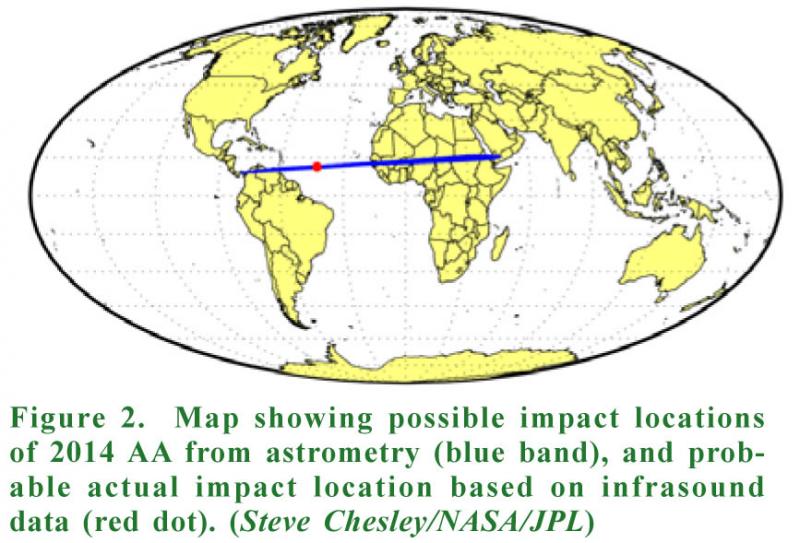 Peter Brown (University of Western Ontario) and Petrus Jenniskens (SETI Institute) subsequently searched data from low frequency infrasound observation sites of the Comprehensive Nuclear Test Ban Treaty Organization. They found weak signals from stations in Bolivia, Brazil and Bermuda which indicated that the likely impact location was indeed positioned within the predicted impact area (Figure 2).
The impact appears to have occurred on 2014 January 2 at about 04h UT, high above the mid-Atlantic some 3000km due east of Caracas, Venezuela. The object is estimated to have been 13m across and given its small size it, like 2008 TC3, will have disintegrated high in the atmosphere, appearing as an especially bright fireball. At the time of writing no-one has reported witnessing the result of its entry into the atmosphere.