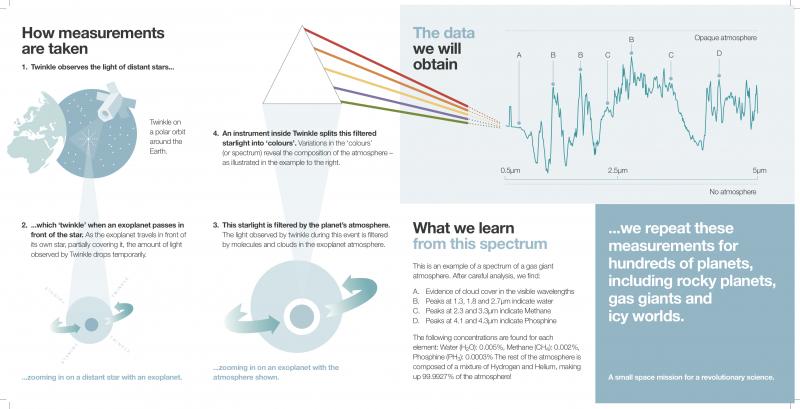 Despite the difficulties of an Underground tube strike in London that happened to coincide with the day, 27 keen participants reached Burlington House and took part in this most stimulating workshop, six others having had to cancel. Its purpose, as the first of hopefully many similar workshops in the future, was to explore the scope for amateur support of two space satellite missions, Twinkle and ARIEL, that are designed to characterise exoplanets orbiting nearby stars. In particular, it is envisaged that useful ground-based observations of target stars brighter than V= 11.5 can be carried out using modest-sized telescopes equipped with CCD cameras. The afternoon workshop was held in the Council Room and Lecture Theatre of the RAS in Burlington House, and Richard O’Sullivan and Madeleine Davey kindly organised refreshments for us all.

Twinkle is an independent UK-based space mission to characterise the atmospheres of around 100 hot, bright exoplanets observed from Earth orbit. The mission is led by University College London and Blue Skies Space Ltd. It will be built by Surrey Satellite Technology Ltd and involves a consortium of over 15 institutions across the UK – if funding is achieved, it is scheduled for launch in 2019. ARIEL is a more ambitious exoplanet mission in which observations are planned from the Lagrangian L2 position in space, due for launch about 2026.

Section Directors Roger Pickard and Dr Richard Miles represented the Association and most of the amateurs who attended were BAA members, including a student at Cambridge studying Natural Sciences. We also had the company of four members of staff and a PhD student from UCL’s Department of Physics and Astronomy, and two other astronomy-related professionals.

Prof Jonathan Tennyson opened the workshop by way of an introduction to the concept of Twinkle, which theme was developed further by Prof Giovanna Tinetti. Dr Giorgio Savini, who is also the current Director of UCL’s Astronomical Observatory in Mill Hill, rounded off the presentation about the ambitious Twinkle space observatory.

Roger Pickard and Richard Miles gave short talks illustrating what has been possible by way of photometry by amateurs in the recent past (see for example Darryl Sergison’s paper ‘High precision photometry: Detection of exoplanet transits using a small telescope’ published in BAA Journal Vol.123, No.3, pp. 153-156).

Anita Heward, Communications Manager for the Twinkle mission and Press & Outreach officer for the Europlanet 2020 RI (Research Infrastructure) described lessons learned from Europlanet workshops and the ground-based campaign in support of the Rosetta mission to Comet 67P/C-G, and how some of these may be usefully applied to Twinkle. At some point in 2017, it is hoped that a 2-day Europlanet Workshop will enable many more amateurs from countries across Europe to also become involved in ground-based observations. Dr Marco Rocchetto, an R&D engineer at Konica Minolta rounded off the formal talks with an account of the futuristic Connected Telescope Project.

Following afternoon tea, we were able to discuss as a more informal group the first steps in facilitating a worldwide community of amateur observers dedicated to exoplanet transit studies, and to sketch out plans for the next few meetings needed to progress matters. As well as BAA involvement, we would like to encourage any interested parties whether individuals or other organisations in the UK and beyond to get involved in the Twinkle/ARIEL initiative. If you are interested then do please contact either of the undersigned or consult the ARPS Section website at http://britastro.org/asteroids