Older BAA members will recall that in 1990 the Association took ownership of an archive of approximately 11,000 Schmidt Camera plates, taken between 1965 and 1990, initially by the Royal Radar Establishment (RRE) at various sites near Malvern and latterly under the management of the Ordnance Survey at RGO Herstmonceux, at the Royal Observatory Edinburgh and at Siding Spring Observatory, NSW, Australia. The plates were taken to track satellites – Blue Streak before it was cancelled, then objects launched by foreign countries – for geodetic analysis and defence.
Two Schmidt cameras were designed for this specific purpose by Dr Joseph Hewitt (1912-1975) of RRE and built under contract to Grubb Parsons. As well as the satellite trails, the plates recorded background stars down to typically 11th magnitude, making them potentially a valuable source of historical astronomical data in such areas as variable stars, astrometry, asteroids and X-ray bursters.
Later in 1990 custodianship of the plates was transferred to Crayford Manor House Astronomical Society (CMHAS)[1] and the plates have been made available to the astronomical community ever since. Prior to mid-1978 the images were recorded on plate glass, but thereafter the far easier-to-handle plastic film was used. Each plate was a negative and covered an area of sky 10° in diameter at a scale of 1cm to 1°.
The Society’s first, not inconsiderable, task was to construct an index to the UK plates so that all the plates showing a particular object (or satellite) could be readily identified, and this was accomplished by early 1992. Luckily an index to the Australian plates already existed. Both indexes are available on the Society’s website.[2]
Although the plates appear outwardly to be in good condition, they will inevitably deteriorate with time and an ideal way to keep their information intact would be to digitise them. Dr Robert Smith of the University of Sussex kindly put us in touch with Dr René Hudec of the Czech Technical University in Prague, who has much experience in the field of plate preservation. 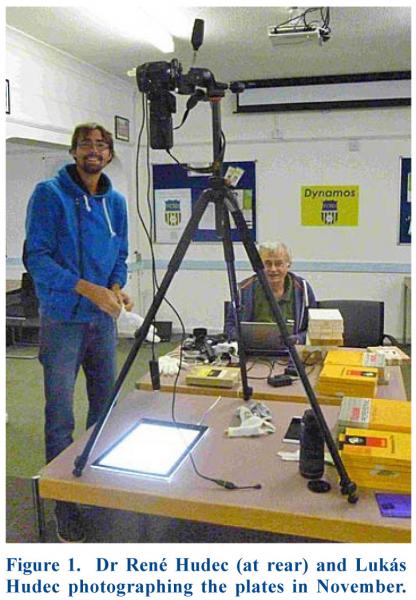 Thanks to a grant from the RAS, René and his son, Lukás, were able to visit the archive at Sutton-at-Hone, Kent in 2017 November to assess its condition and do some test digitisations. His technique involved placing each plate on a light table (Figure 1) and photographing it using a high quality lens with a relatively long focal length and a high resolution CCD camera. The images taken were each approximately 50Mb in size, so the entire archive would potentially fit on two 1Tb hard drives (one for backup) – a vast improvement in space and weight over the existing format! Also the images themselves could then be made available online. During their two-day visit René and Lukás were able to digitise approximately 2,000 plates, and René was able to confirm that the plates themselves were still in good condition.
He was also able to select from the index those plates that showed a controversial star (‘J1407’)[3] that has in the past shown eclipses, thought to be due to an exoplanet with a suspected extended ring system. These plates were photographed successfully and are hoped to form the basis of a technical paper. One of these images is shown in Figure 2, a 10° diameter field on the border between Centaurus and Lupus, reaching down into the magnitude range of the eclipsed star.
It was agreed by all that Dr Hudec’s visit had been a great success and that his technique should be potentially applicable to other plate archives in the UK, as well as to the rest of the Hewitt Camera Archive.
It has not yet been finally decided what form the Archive will eventually take, but photographic digitisation is clearly a strong candidate for the final format.
John Howarth, CMHAS at Dartford
1    Howarth J. J., ‘The Hewitt Camera Archive at Crayford’, J. Brit. Astron. Assoc., 102(6), 343 (1992)
2    www.crayfordmanorastro.com/hewitt cameraarchive
3    Mamajek E. E. et al., ‘Planetary construction zones in occultation: discovery of an extrasolar ring system transiting a young sun-like star and future prospects for detecting eclipses by circumsecondary and circumplanetary disks’, AJ, 143, 72 (2012)