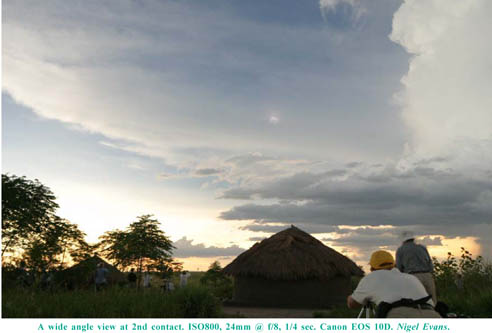 The hybrid eclipse of November 3 this year was always going to be a tricky one to observe. It started as an annular near Bermuda, very quickly became total and raced across the Atlantic making landfall in Gabon, West Africa. It then tracked across equatorial Africa passing through Congo, DRC, Uganda and Kenya, finally leaving the Earth at sunset in Ethiopia. The maximum duration of totality was at a point in the Atlantic, south of Liberia. At maximum, totality lasted 1m 40s.

At this time of the year most of this path is very cloudy and so a number of groups, including the Astro-Trails group that I joined, decided to go to Uganda. The weather here was, statistically, much better than further west or east although the duration of totality was much shorter, only around 20s from our selected site. Totality was short but this meant that the apparent diameter of the Moon would be only slightly larger than that of the Sun, so we should see impressive Baily’s Beads, prominences and chromosphere.

In addition to the normal run of eclipse chasers the President of Uganda (Yoweri Meseveni) was also planning to view the event from a site just north of Pakwach, around 30km west of us. He stayed at our hotel on the night before the eclipse and, on eclipse morning, we had the surreal experience of being presented to him, after suitable security screening. He welcomed us to Uganda and asked a few questions about eclipses but we parted fairly quickly since all of us were off to our respective observing sites.

Shortly after lunch we left for our preferred site which was just south of Onegi Bridge at 31°.698525E, 2°.622109N. The weather conditions followed a pretty standard pattern of being clear in the morning but then gradually clouding over as convective clouds formed. These clouds slowly dissipated in the late afternoon. At our location totality was due at 17:22 local (14:22 UTC) with the Sun only 17° above the horizon. We had to hope that we would be lucky enough to see the eclipse though a gap in the clouds.

We arrived at the site at 15:00 local time, around an hour before first contact, and began to set up. The site itself was a small settlement with a few huts, some agriculture and a field of sunflowers. Good views of the partial phase were seen but cloud increased as totality approached and eventually the Sun was only visible through thick cirrus. The main effects seen at totality were therefore Baily’s Beads and the horizon colours. These were both spectacular (see pictures) but the corona, chromosphere and prominences were lost. I did look with binoculars in the middle of totality and the inner corona was very faintly visible, however it required very long exposures to pick it up.

Totality was over very quickly and the shadow rushed off to the east. We’d seen a very pretty eclipse at a fantastic location but it could have been so much better if that infuriating cirrus hadn’t been there. On the way back to the hotel we were passed at great speed by the President’s motorcade. According to the local papers, his group was lucky as the cloud cleared a few minutes before totality, and he was impressed by what he saw.