The International Astronomical Youth Camp (IAYC) first began back in 1969. The camp was the first of its kind, with the aim to enthuse, inspire, and educate the younger scientists of the future. The only requirement was a passion for astronomy. 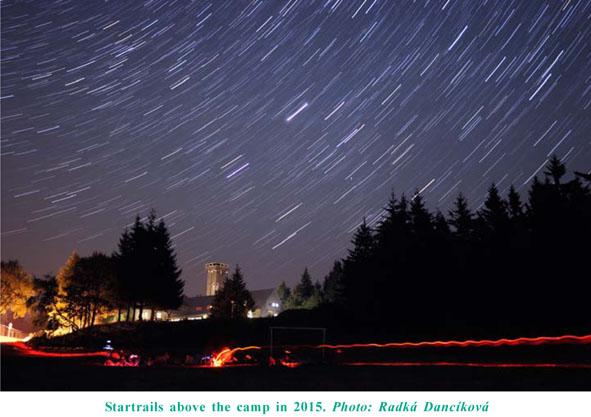 Every year around 60 young astronomy enthusiasts from around the world meet for 3 weeks somewhere in Europe (preferably on top of a mountain) to undertake various scientific projects related to astronomy. The IAYC is still going strong, with the most recent camp taking place in Klingenthal, Germany between 2015 August 2 and 22. There were 62 participants aged between 16-24 years, of more than 30 different nationalities, sharing meals, stories and the night skies together. Many of the participants had never travelled abroad before, but by the time they left they’d made friends for a lifetime.

Globally, there is nothing like the IAYC in existence. It’s amazing to see the transformation of the participants over the duration of the camp. High school students work together with PhD students, in an environment which provides ample opportunity for discussion. Like-minded young people engage with one another, sharing the same eagerness to learn about the mysteries of the universe. Some have never programmed, conducted an extended scientific experiment nor written a report before. However everyone is more than welcome at the camp, regardless of prior experience and academic background.

To accommodate an astronomer’s nocturnal routine, breakfast is served at midday, lunch at five, and supper at midnight. The participants spend most of the day working on their projects with the help of the leaders, culminating in an individual report that is published in a book (all participants receive a copy later in the year). It’s always hard to decide between the numerous working groups on offer. Last year, there was a choice between learning to program while exploring cultural astronomy; constructing a radio telescope and listening to the sounds of the Solar System; observing exoplanet transits; working with optics; practising astrophotography; or exploring future technologies. At previous camps there have also been projects involving electronics, rocket launching, robot building, weather balloons, astrobiology, and much, much more.

By night the telescopes come out. Everyone has the chance to learn how to set up and dismantle the equipment, and of course use it. The IAYC currently owns 8 telescopes: two Dobsonians; an 8″ and a 5″ Newtonian; an 8″ and a 5″ Cassegrain (each with go-to mounts); and a Coronado solar telescope. We also have 3 CCD cameras, a Star Analyser diffraction grating, photometric grade Johnson-Cousins filters as well as several emission line filters for astrophotography. Those who have never looked through a telescope before are struck with awe and gaze in wonderment as they peer back in time at planetary nebulae and globular clusters many hundreds of parsecs away. We also provide a dark room along with plenty of film and analogue cameras for those who like to indulge in their nostalgia.

To bring some light-hearted relief to the intensive working group sessions, there is the Non-Astronomical Programme – NAP for short. Everyone takes part in a huge variety of activities, many of which have been traditional for years. Working groups make a film for the movie game and compete against each other in a variety of different tasks. Participants have to think outside the box in the construction game, and take a trip down memory lane playing games like sardines or sleeping lions. Of course the most testing challenge of all is the treasure hunt! We encourage everyone to showcase their talents: giving cultural performances, reading poetry, or singing together by candle light.

The IAYC has inevitably changed a lot since it first began more than 4 decades ago. We no longer spitroast an entire pig during our last night together (although we still do have a bonfire), the official language is now English, not German, and the camp las

ts for three weeks instead of one. But its essence remains the same. The camp provides something incredibly unique; it shows that astronomy inspires and captivates, and is an excellent way of getting younger students excited about science.

For the first time in its history, the IAYC is coming to the UK. We have found the perfect location in the Exmoor National Park – the first International Dark Sky area in Europe. It will take place between 2016 July 24 and August 13. We will be at Nettlecombe Court, Somerset, a beautiful estate steeped in history since the Middle Ages. For more information on how to apply, please visit our website: www.iayc.org. We look forward to receiving your application!