The larger sunspot groups of Cycle 24

In many areas of amateur astronomy it is the brighter objects that attract the most attention, whether these be bright comets, novae or supernovae. In the case of solar observing, the large sunspot groups are of greatest interest, even to amateur astronomers who do not routinely monitor the Sun in white light or in narrow bands such as Hydrogen-alpha (Hα) or Calcium K (CaK). As large sunspot groups are usually responsible for most solar flares, their impact on the Earth’s magnetic environment may lead to the appearance of aurora and they can be monitored at radio wavebands, including Very Low Frequencies (VLF).

This paper firstly examines the characteristics of Solar Cycle 24, which began in 2009, using observations submitted to the BAA Solar Section. A list of the larger sunspot groups from the cycle is then provided, followed by descriptions and images for the five largest groups. Finally, a comparison is performed of the larger sunspot groups from Cycle 24 with those of previous cycles, dating back to the start of the 20th century.

After a prolonged solar minimum, Cycle 24 began in 2009 and peaked in early 2012 & mid-2014, as shown in Figure 1 (based on BAA Solar Section observations). In comparison with previous cycles, Cycle 24 was the smallest since Cycle 14 which peaked in 1906 (based on the International Sunspot Number). 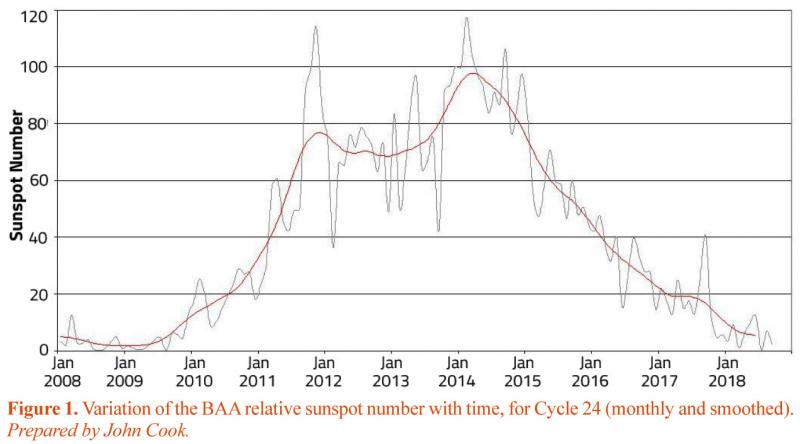 Although not unique, the double peak of Cycle 24 was quite pronounced. As Figure 2 illustrates, this was the result of differing activity between the northern and southern solar hemispheres. It can be clearly seen that northern activity led to the first peak and southern activity to the second. The plot also shows that the fall to minimum, expected in 2019, was faster for the southern hemisphere than for the northern.

BAA solar observers record a variety of features in Hα, including prominences on the limb of the Sun. The monthly Mean Daily Frequency (MDF) for prominences during Cycle 24 is shown in Figure 3; even at solar minimum there were prominences, while during the cycle itself prominence activity followed a similar trend as for sunspots.

The BAA Radio Astronomy Group use VLF receivers to record the number of Sudden Ionospheric Disturbances (SIDs) caused by solar flares; e.g. see Cook (2018). The detected SIDs are classified according to solar flare class. This is depicted in Figure 4 where C-class flares are shown in green, M-class in orange and the most energetic X-class in magenta… (continued)