The ‘Local Group’ and the ‘Seven Dwarves’ 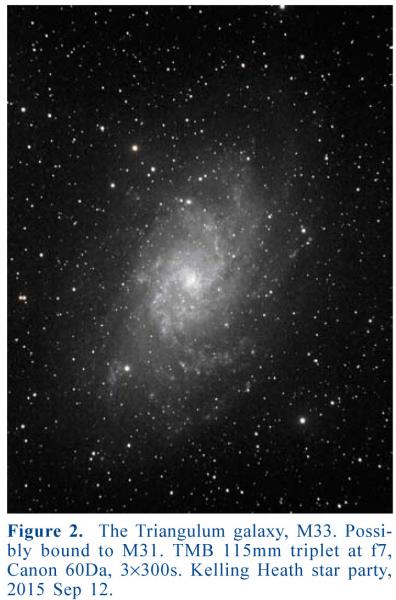 The Local Group of galaxies is a modest collection of some 54 galaxies of assorted size and activity occupying a 10-million lightyear diameter sphere in our local Universe; it is a peripheral part of the Virgo Supercluster. Many members of the Group have been discovered only recently and were difficult to detect. Although the two largest galaxies beyond the Milky Way but within the Local Group (Messiers 31 & 33), are very frequently observed by amateurs and professionals alike, there are also many dwarf galaxies that can be overlooked or dismissed as dull or too difficult.
This is far from the case and the autumn sky is a great season to chase down many of these near neighbours of the Milky Way, both in the northern and southern hemispheres. The rise of remote observing means that the enthusiastic northern amateur can at least image some superb island universes, even if observing opportunities by direct visual means are more limited.
The Local Group is generally divided into three main subgroups: the Milky Way’s family, the Andromeda Galaxy’s family, and the more isolated galaxies within the Local Group.
The Milky Way’s family comprises the Magellanic Clouds, the Fornax Dwarf, the Sculptor Dwarf, and other dwarves in Sagittarius, Ursa Minor, Draco, Leo and Ursa Major.
The Great Andromeda Galaxy group consists of Messier 31 itself plus Messiers 32 and 110 (NGC 205), the pair in Cassiopeia (NGCs 147 & 185), plus very faint Andromeda dwarves 1-XXII (at the last count!).
The lone ones. These are within the Group but are not dominated by the big pair (the Milky Way and the Great Andromeda spiral) although some believe M33 (the Triangulum galaxy) may be one of Andromeda’s family. Others include IC 10 (Cassiopeia), IC 1613 (Cetus), Leo A, the WLM galaxy (Cetus), and other dwarf galaxies in Phoenix, Pegasus, and Aquarius.
Ultra-faint galaxies within a 5 million lightyear radius of the Milky Way have been discovered and continue to be added to the Local Group’s family. The list has risen from 36 to 54 in the last 15 years. Although only two of the dwarf galaxies are spectacular, many are of interest as they can be observed at relatively close quarters by professional astronomers. A few can be enjoyed by the amateur observer and can offer a challenge for visual observers and imagers alike….