Something extraordinarily rare was imaged and videoed across the world, during a routine total lunar eclipse on January 21. At 04:41:37–38 UT, a flash of light was observed near the bright ray crater Byrgius (located close to the southwest limb, or west of Mare Humorum). Two images showing the flash were submitted to the Lunar Section: one by Jamie 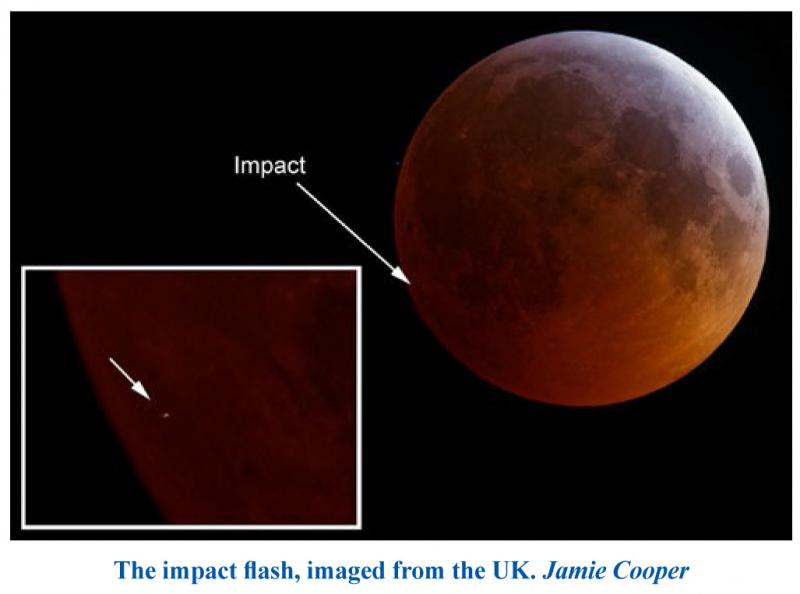 Cooper in the UK and another from Brazil, by Marcello Zurita of the Brazilian Meteor Observation Network (BRAMON). In addition, nearly 50 other accounts of impact flash observations could be found on the Internet within a few days, primarily on http://spaceweather.com. The majority of these were serendipitous images of the Moon, which by chance had captured the impact. If you had been unlucky and taken an image offset in time by more than half a second, you would have missed the flash!

Magnitude estimates are tricky because the exposures of these images varied. Furthermore, the flash was typically only visible for part of an exposure, and thus was often averaged out with the background umbral shadow. However, the images which do show the flash at its brightest suggest that it was at least 350% brighter than the difference between the umbral shadow and the sky background (comparable to NE areas of the Moon, on the thinner part of the umbra), and therefore should have been visible to the naked eye… On the morning of Jan 22, I started to receive a flurry of emails about impact flashes during the eclipse; firstly from Marcello Zurita and then from New Scientist over reports appearing on Will Gater’s Twitter page (https://twitter.com/willgater). As some of the images showed a flash resembling a sharp point, I initially thought that it was a cosmic ray. However, because the images were coming in from all over the world and showed the point of light at the same location and time (with some differences of a few seconds due to Internet time issues), it had to be a lunar impact flash.

A number of other accounts of flashes elsewhere on the Moon, recorded in video and images, were also received. However, all but one appear to have been cosmic ray events. I recorded nearly 50 such events myself on a Watec 902H camera that I had been using to video the eclipse; I knew these to be cosmic rays as they were very sharp and lasted just one TV field. Alas, I missed the main impact flash as my camera field of view did not encompass the site… The only other credible candidate flash was reported on the Twitter page of Tom Kerss (https://twitter.com/tomkerss), from the Royal Greenwich Observatory. This flash was recorded at 04:43:44 UT on the NE limb, but has not been confirmed in any other images or video so far. This might be because it was against a lighter part of the umbra and any flash here would have been affected by saturation or low contrast.

Impact flashes that are bright enough to see visually are incredibly rare. So if BAA observers of the eclipse could check their eclipse images/video of the SW limb around 04:41:37–38 UT, or the NE limb around 04:43:44 UT – allowing for timing errors of a few seconds – and report any findings to me (atc@aber.ac.uk), then this would be appreciated greatly by the Lunar Section. Impact flash detection is one of the activities of the Lunar Geological Change group in the Lunar Section. The software Europlanet is available to help search through videos of earthshine or eclipses, in order to avoid doing this arduous task manually. You can download this from the following website: http://users.aber.ac.uk/atc/alfi.htm.