The nebula vanishes: a disappearance of McNeil’s Nebula 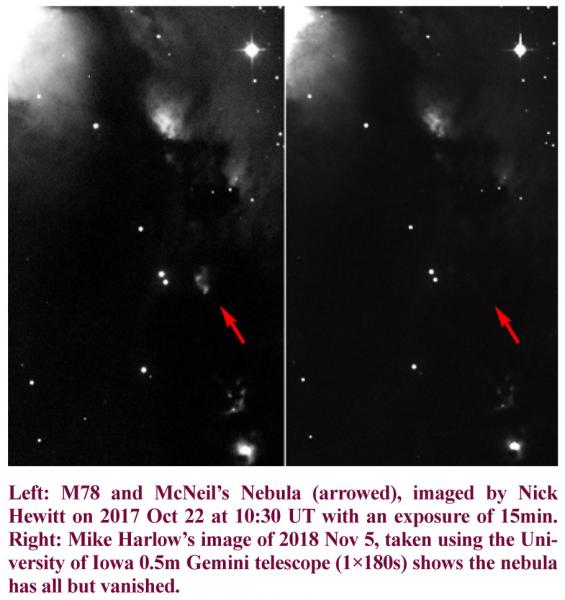 McNeil’s Nebula, in Orion, lies just south of the well-known reflection nebula Messier 78. It was identified as a nebula by Evered Kreimer in 1966, but it was not recognised as one of the rare ‘variable nebulae’ until it was recovered by Jay McNeil on 2004 Jan 23. McNeil had been testing his new 3″ refractor and CCD set-up when he wisely checked his images, and detected a marked brightening. In the years after recovery, it became faint again until early in 2011, when it brightened quite markedly.

However, on 2018 Nov 5, Mike Harlow of Orwell Astronomical Society in Ipswich imaged the nebula and it was undetectable. Nick Hewitt confirmed this and alerted the community. An image taken in 2018 October by Richard Berry (USA) was sent in, suggesting the nebula had already begun its fade before then. Orion and Messier 78 are popular targets in winter, but few observations are made in the early autumn. Further observations have been received since this disappearance, from Mike Harlow, Rupert Smith, Atish Aman, Ajay Tanwar (both from India) and Grant Privett. On Grant’s image of 2018 Nov 18, a ghostly trace of the nebula can just be seen but it remains faint.

McNeil’s Nebula is associated with the young stellar object V1647 Orionis. At its best, the nebula has a fan or flame shape, north of the faint variable. It may resemble the more famous ‘Hubble’s Variable Nebula’ (NGC2261), in which the northern fan has material close to the infant star silhouetted on collimated material – a cosmic Noh play. However, Hubble’s Nebula has never faded (although the southern component is almost completely obscured by the accretion disc material associated with the star). Perhaps a huge cloud of dust and gas has caused the fade in McNeil’s nebula – its reappearance may help us to work this out.

More images of this fascinating object are sought over the coming months. Please forward your results to nickdhewitt@btinternet.com.