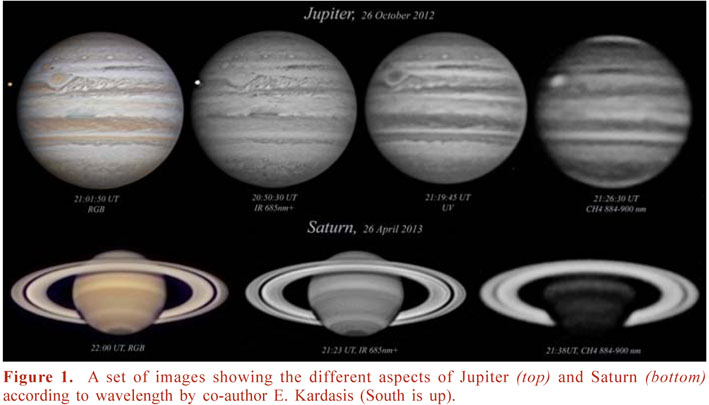 Collaboration between amateur and professional astronomers is increasingly important in many areas of solar system science. In this paper we focus on the gaseous giant planets. For both professionals and amateurs, the overarching goal of observations is to understand the atmospheres of the giant planets, which are so different from Earth, and so typical of many planets now being discovered around other stars.

Jupiter and Saturn have been observed intensively for over a century. There are historical accounts of these observations in publications, most of which are by the British Astronomical Association (BAA), Association of Lunar and Planetary Observers (ALPO),  Association of Lunar and Planetary Observers of Japan (ALPO Japan) and Société Astronomique de France (SAF). In recent years amateurs have captured numerous high-resolution images as a result of the advancement of technology, providing near-continuous coverage in visible and near-infrared wave-bands.

Meanwhile, professional astronomers have long-term observational programmes to observe the giant planets with NASA’s InfraRed Telescope Facility (IRTF) and the Pic du Midi 1m telescope. Observations are also made using the Hubble Space Telescope (HST), Subaru telescope of the National Astronomical Observatory of Japan and the European Southern Observatory’s Very Large Telescope (VLT). However, most of these are directed to the giant planets only intermittently (largely due to intense competition for time) and mainly at infrared wavelengths. Several spacecraft have also visited each planet, and the Cassini spacecraft is operating in orbit around Saturn as of this writing.

Even though the professional ground-based and spacecraft observations provide a large variety of spectral and temporal data, the amateur network of more than 100 observers around the world still provides professionals with important types of information: complementary wavelength coverage to professional near- and mid-infrared observations; global coverage and context for their observations; independent verification and confirmation of their observations; and tracking of features and alerts of new events which are worthy of professional study. Therefore, the key advantage that the amateur community provides is that of flexibility and spatiotemporal coverage for context. Both of these widen the discovery space significantly compared to the capabilities of professional observers.
(continued….)