Since the extensive auroral display of February 27/28 there has only been a handful of reports of auroral activity. The expected increase in solar wind activity associated with the spring equinox did not materialise, with auroral displays noted only on March 12/13 and 25/26 by three observers in northern Scotland. Displays were also reported by a few northerly observers on April  05/06, 06/07, 12/13, 17/18, 18/19, 19/20 and 20/21. The summer months make aurorae difficult to see in northern regions but because of continuing low solar activity it is unlikely that anything would have been seen even had skies been darker. 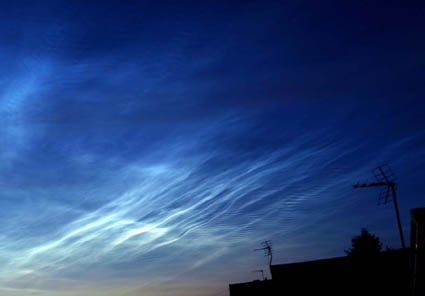 There is an almost tangible anticipation of the first sighting of noctilucent cloud of the season among many NLC observers. The average date of first appearance by ground-based observers since 2006 has been on the evening of May 24/25, but last year it was a little earlier on May 22/23. NASA’s AIM satellite, launched in 2007, has provided images each year since its launch using the CIPS instrument, but the interpretation of the images seems not to have been particularly easy for the faint wisps of early sightings. However, these early CIPS images give an idea when the first NLC of the season occur and are often noticed a few days before ground-based sightings are recorded.
The first report of NLC in 2014 was from an observer in Jutland, Denmark on 2014 May 20/21. This observation had the support of Dr Peter Dalin but no other positive sightings were recorded. Prof Cora Randall, investigator of the AIM satellite’s CIPS images, identified NLC for the first time in 2014 from a composite image taken on 2014 May 24. The image for that date shows small, wispy areas of NLC which would have been difficult for ground-based observers confidently to identify.
The first widely seen display was on the evening of May 30/31 when NLC were reported from UK and Germany by 10 observers. One report was received from Germany on June 02/03, then a display on June 05/06 was seen by UK observers. June 09/10 and 10/11 produced displays, the first being seen in Europe and UK and the second reported only from UK. It is interesting to note that there were a number of nights in late May and early June when no NLC were reported, but the 2013 season produced observed NLC on almost every night from May 22/23 until the end of June.
Following June 10/11, NLC frequency increased and reports were received for the following dates: June 12/13, 14/15, then every night from 16/17 until June 30/July 01. It can be seen that there remain a few evenings in June when NLC were not reported and the number of observers reporting in 2014 to the end of June was significantly fewer than those in 2013. Poor weather conditions in more northerly areas may partly explain the fewer reports but while it was quite cloudy in Scotland, much of the rest of the country enjoyed fine weather.
Whatever the reasons for the reduced number of sightings during June, an indication that ice in the mesosphere was increasing at higher latitudes was received from Cora Randall in early July.  Plots were sent to the Director showing that the CIPS instrument had detected a sudden marked increase in NLC frequency from the last week in June. This information proved to be accurate also for lower latitudes as NLC frequency and sightings increased markedly from July 02/03 with widespread sightings on July 03/04 and 04/05.
Observers throughout UK and Europe were treated to a superb NLC display on the evening of July 06/07, the like of which the Director has not seen since 2009 July.  After a long night for many observers, the following night, July 07/08, produced another very good display which would have ranked as one of the best of 2014 but seemed less impressive when compared with the previous evening’s show.  At the time of writing, the weather conditions seem to have improved throughout the UK and observers are looking forward to a continuation of this increased NLC activity, hopefully into August.
There may be a number of other reports which have not yet been submitted and a better idea of the difference in NLC activity and sightings between the first and second halves of the season may become clearer as all the reports are analysed. The Director would like to thank all those who have submitted reports, often accompanied by excellent images and sketches.