The North Polar Hood of Mars 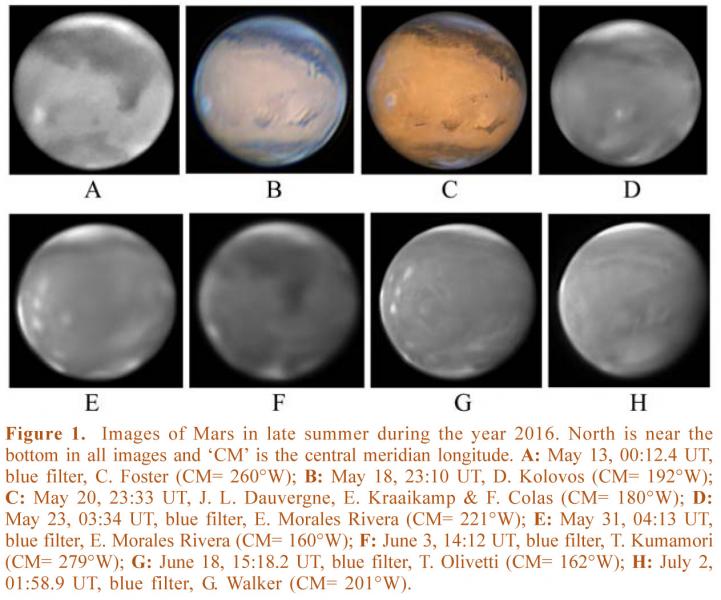 Introduction
The North Polar Hood (hereafter NPH) is a system of clouds which develops over the North Polar Region (NPR) of Mars during late summer and lasts until spring of the following year. Hereafter, the season will correspond to Mars’ northern hemisphere. A brief historical review is first presented. The goals of this study are then presented followed by a description of the method used. In the next section, the results are presented. Finally, the results are discussed.

Historical overview
J. H. Schröter undoubtedly observed the NPH in 1798. He reported that it had a ‘slightly bluish’ colour which is different from the whitish or yellowish colour he observed for the South Polar Cap.[1]  C. E. Burton estimated the NPH diameter to be over 90° in late 1879.[2]  G. Schiaparelli also observed parts of the NPH extending down to 50°N to 60°N during late 1879 and early 1880.[3]  E.–M. Antoniadi [4] stated that white clouds are frequently observed in the NPR, and pointed out that various astronomers including F. Kaiser and himself observed them in 1864, 1896-’97, 1911 and 1926.

W. R. Dawes drew the NPH in 1864 and noticed that it covered Mare Acidalium.[5] Lowell apparently observed the development of the NPH in 1903 July at Ls= 150°.[6] Pickering presented an early photograph of ‘a temporary belt of cloud surrounding the north pole’ in his book Mars.[7] This photograph was taken in the late nineteenth century and is probably one of the first of the NPH.

De Vaucouleurs[8] reported that the North Polar Hood, which he called the ‘north polar haze cap’, is a seasonal phenomenon which develops at the same seasonal date each Mars year. In this paper he reported observing Mars between 1937 and 1969. Furthermore, he reported that this haze first develops in late summer and it thickens afterward. De Vaucouleurs also reported that its albedo is 0.3 and is less than that of the polar ice caps.[9]  Slipher[10] showed several early photographs of the NPH and reported that it had moved beyond 40°N in 1960 December.

Dollfus measured a polarisation curve of the North Polar Hood in 1958.[11] This curve is similar to the polarisation curve of other white clouds on Mars. Furthermore, Martin et al.[12] reported that polarimetric measurements reported by Focus & Dollfus are consistent with the NPH being like other white clouds on Mars. Martin & McKinney[13] reported maps of the NPH during mid-1969. They also pointed out that there is no obvious or consistent relationship between surface albedo markings and the boundaries of the NPH.

Mariners 6 & 7 made several dozen images of the NPH in mid-1969 near Ls= 200°.[14] Briggs & Leovy[15] described Mariner 9 images of the NPH taken in early 1972. They pointed out that dust, condensation and lee-wave clouds developed in the NPH. Martin[16] carried out a study of the NPH during the global dust storms in 1956, 1971 and 1973 and concluded that it got smaller or disappeared during these storms.