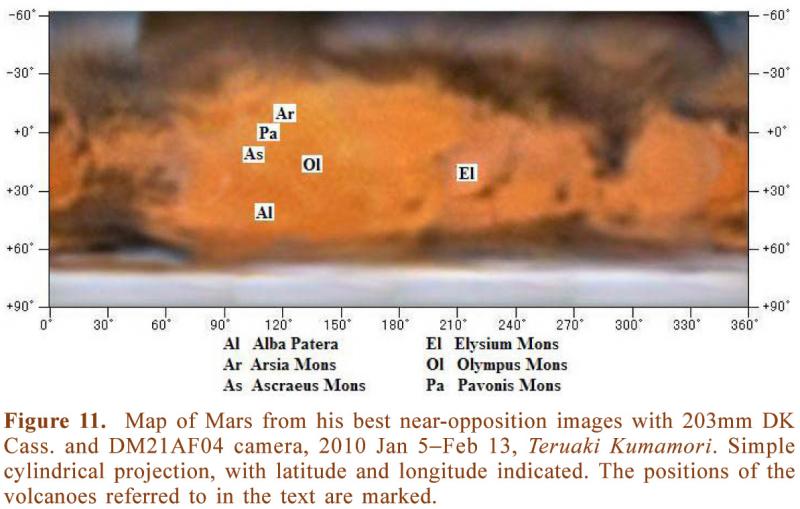 Part I of this report (in the 2018 June Journal) described atmospheric dust activity and its effects upon surface features and the N. polar cap. (Numbering of figures, references and tables runs on consecutively from Part I.) As in 2005 and 2007, we only attempt to discuss those aspects of the white crystal clouds that enable us to check well-established seasonal patterns. Figure 11 shows the planet near opposition and indicates the positions of the volcanoes referred to in this part.

Equatorial Cloud Band (ECB)
The first sign of an incomplete ECB, when the Xanthe white evening cloud became drawn out in the f. direction, was due to Minami on 2009 Oct 28 (Ls= 001°) and 29, etc. In the longitude of Chryse (Oct-Dec) Minami found that the ECB developed each Sol from around CM= 55°. This commencement accords perfectly with spacecraft data, which established that the ECB begins to be visible from Ls= 0°, but is never complete or conspicuous before Ls= 50°. ECB continued sporadically and incompletely in the above manner for some months, particularly across Chryse-Xanthe and from Elysium through Aethiopis to Isidis Regio-Libya. In Figure 12 we have shown the progressive development of the ECB over two selected regions of longitude. ECB can also be seen in some other Figures (Parts 1 and 2).(continued…)