Part I described atmospheric dust activity and its interaction with albedo features and the N. polar cap, as well as the extraordinary terminator phenomena of 2012 March–April.54 (Numbering of figures, references and tables runs on consecutively from Part I.)

In Part II we note the seasonal behaviour of the Equatorial Cloud Band (ECB), the orographic clouds and the spiral clouds near the N. polar cap. Drawings and images appear in Figures 15–18. The Syrtis Blue Cloud was well seen and, as previously noted, this is a phenomenon associated with the presence of the ECB. We have not specially looked for the ‘violet holes’ detailed in some recent reports, though we mentioned them in conjunction with dust storm activity in Part I. Neither do we discuss routine diurnal clouds or the so-called (but now known to be non-existent) ‘Blue Clearing’. 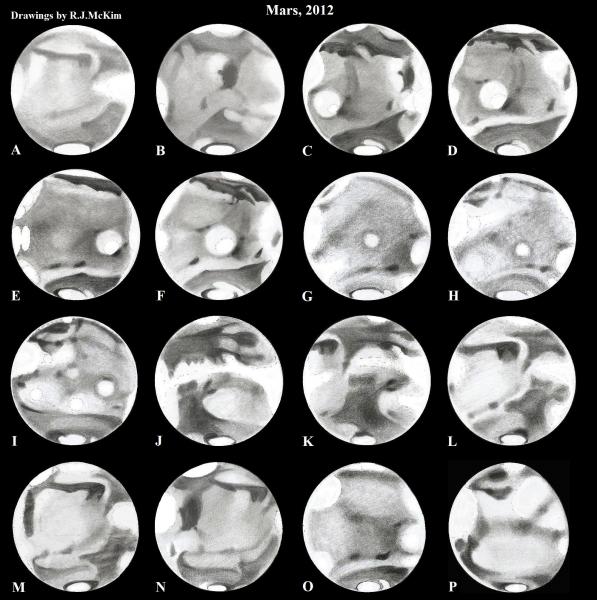 The ECB remained patchy and incomplete for several more months. On Dec 12 to Poupeau (CM= 004–015°, Ls= 42°); on Dec 24 to Macsymowicz; on Dec 29 to Buda; and on Dec 30 to Flanagan it finally seemed complete. At some other longitudes the ECB remained patchy or faint (in particular, the Tharsis Montes always interrupt it).

Nearly all blue-violet images with the appropriate passband showed a complete ECB from Feb 20 onwards. As ever it was best seen in UV: thus on Mar 10 it was complete to Parker in UV, but in blue light stretched only across Elysium to Isidis Regio. Pellier mapped the ECB near local noon during Feb 21 – Mar 18.55 Now at maximum development, it was sometimes apparent in white light: see the author’s drawings in Figures 15J–K. Moreover, at that stage the bluish tint of the Syrtis Blue Cloud was visible mid-disk; the Syrtis looked paler in RGB images and was invisible or nearly so in blue (or UV). This was the case to Pellier, Feb 26–29; Akutsu, Mar 21–25; Peach on Apr 1–2; Parker on Apr 13, etc.

High-resolution work by Peach during Mar 11 – May 28 (his final observation) showed intricate filamentary structure within the mature ECB: see Figures 16 & 18.

The ECB was very strong in blue under CM= 123° to Peach on Apr 21 and visually to the author under CM= 104° on Apr 22. Indeed, it was still strong and complex on May 28 in Peach’s final blue images in Figure 18. Yunoki found it complete on Jun 1. It was still weakly present in the images by Willems up to Jul 4 at Ls= 134° (with Syrtis Major faded by it but no longer totally effaced). However, no later images were good enough.

The Syrtis Blue Cloud could be seen at the edge of the disk whenever the ECB was sufficiently strong, and the effect often showed up in images over the extreme range 2012 Jan 15 – Jun 29. Particularly strong sightings were found at the a.m. terminator after opposition, where morning mist enhanced the scattering of the shorter wavelengths. At the height of the ECB, the Syrtis Major was occasionally clearly tinted blue upon mid-disk and sometimes appeared less dark (for example, to the author on May 15). As noted above, at such times the ECB could on occasion be weakly traced in white light.

A seasonally related aspect of the ECB was when one or two small bright white clouds obscured part of Syrtis Major, or bisected its mid-latitudes upon the evening limb. This effect was sometimes recorded during Jan 27 – Apr 4 (Figure 15A and Part I, Figures 2H & 13).