We deal briefly with meteorological indicators; much detail was given in the last report.1 The Director’s drawings illustrate the changing meteorology in Figure 12, the N. polar spiral clouds are shown in Figures 13A–C and the Equatorial Cloud Band is shown in Figure 14. 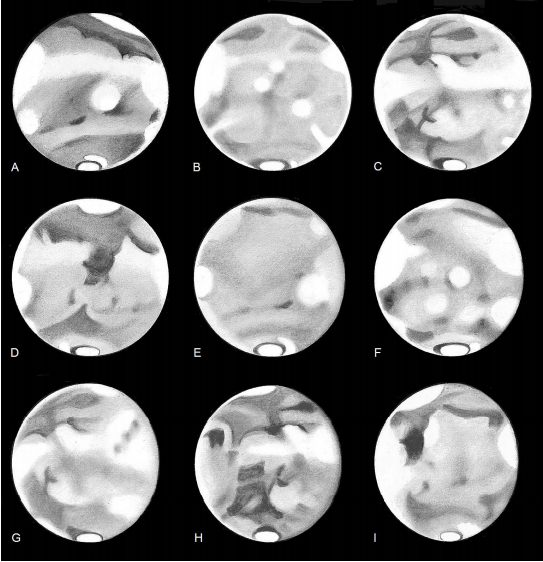 As in 2012, the highest-resolution blue images showed considerable fine, fibrous structures within the ECB at its height, like terrestrial cirrus: see Figure 14B–C. Furthermore, tiny bright patches of cloud were sometimes noticed even in integrated light, over locations which would have been unusual in the absence of the ECB. For instance, Pellier on Mar 13, Parker on Mar 17 and Peach during Apr 19–22 saw one such fragment in northern Aeria, at the N. edge of the ECB. Peach on Apr 14–18, Milika & Nicholas on May 3 and Pellier on May 14–15 saw small white clouds over SW Cydonia, while Parker imaged another in NE Arabia on May 29. In Part I we mentioned a small, bright projecting terminator cloud seen on Apr 7–9.1 All these lay within the latitudes and timespan of the ECB.

As with the ECB, the planet was too distant to catch the commencement of this feature, but it was very well seen later, and recorded for certain from 2014 Jan 6 to Jun 12 (till Ls = 145°): see Part I, Figures 2 & 4. As in 2012, one or more discrete clouds were sometimes seen over the central latitudes of Syrtis Major, cutting across it at the evening limb (Figure 13A and Part I, Figures 2G & H).

See Figures 12 & 13C and Part I, Figures 2, 4 & 6. Elysium first appeared whitish on 2013 Sep 18 (Ls = 023°) to Gray, on Sep 20 to Peach and on Oct 2 to Maxson, in the evening. Brightening over time, its orographic cloud had become conspicuous by late December, remaining bright through opposition into early June. It was still fairly bright near the evening limb to Olivetti on Jun 28 (Ls = 153°). Later observations hardly reveal its presence.

At the last two oppositions it had first become visible as a light spot on the evening side at Ls = 020°.1