Part I dealt with surface features and dust storms.39 Part II focuses upon white clouds and polar regions. The numbering of figures and references continues consecutively from Part I.

These meteorological indicators were previously described and explained:1,2 see Figures 13–19. 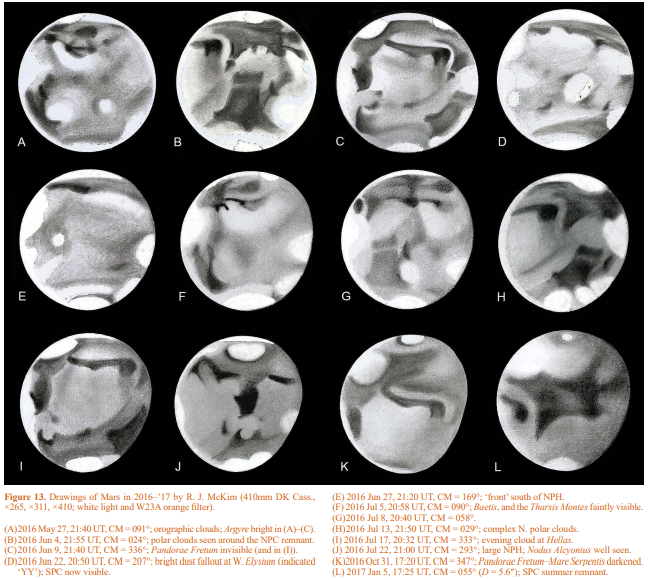 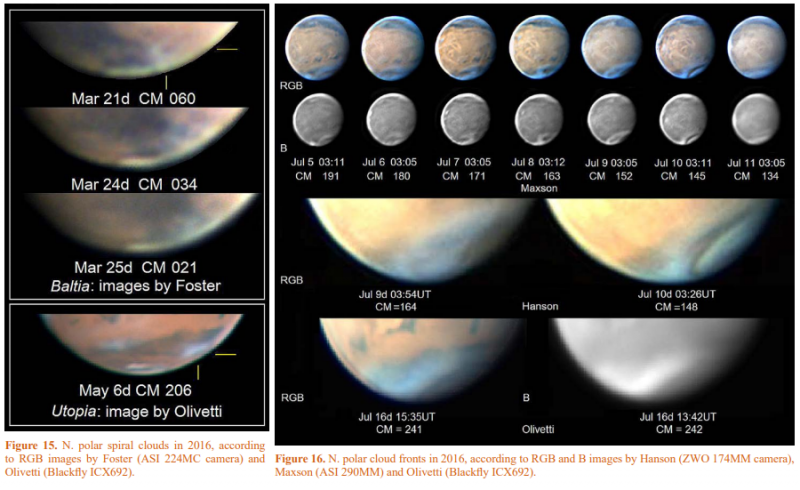 Seasonal commencement was unobservable, though the ECB was present and complete to Morita and Olivetti by 2015 Nov 14–15 (Ls = 68–69°), and remained prominent through 2016 March (Figure 14). It faded in April. Kumamori on Apr 11–15 showed it complete but weak, while on Apr 19 (Ls = 140°) it was pale and only partially visible. The best data showed that in its later stages it consisted of fibrous, partially complete east–west cloud streaks. For instance, Akutsu, Kumamori and Olivetti on Apr 29 – May 1 showed this aspect around CM = 230–300° (Figure 14). Possibly the last trace of partial ECB was caught by Olivetti on May 6 around CM = 210°, at Ls = 148°.
Peach (Figure 14) continued to record fragments of streaky clouds in his high-resolution June images, particularly in the N. polar region, although the ECB season had finished.

Seasonal commencement of this too was unobservable, but the feature was recorded for certain in the morning and/or evening from 2015 Nov 23 – 2016 Apr 28: nearly the same epoch as the ECB.

As usual, one or more discrete clouds were sometimes seen over central Syrtis Major, near the evening limb. Morales caught one on Feb 29. Many observers showed these clouds more prominently – and in considerable detail – from around Mar 16 till May 13 (e.g., Akutsu’s Apr 29 image in Figure 14). Justice and Valimberti found them hardly visible by May 24: our final sightings.

The Hubble Space Telescope (HST) obtained a superb image of such a cloud on May 12,40 bearing a striking resemblance to its shape upon Foster’s image of May 2 (Figure 17).

The orographic clouds over the Martian volcanoes were beautifully seen in the months leading up to opposition (Figures 13–14 and Part I, Figures 2–4), although their seasonal commencement was unobservable. They were still visible up to the time when we could no longer access the evening terminator, so that the later date limits quoted do not represent a seasonal limit.

Bright in the evening upon images during 2015 Nov 14 (or earlier) – 2016 Jun 20 (very weak on this latter date). Visually, Gray saw the evening cloud here even earlier, on 2015 Sep 11. In March–April, the banner cloud streaking to the west of the caldera was especially well seen: see Part I, Figure 3.

The MRO cameras found seasonally later white cloud activity at Arsia, which was much reduced by the atmospheric warming caused by a large Regional dust storm in 2017 February–March.39 This could no longer be checked using ground-based data.

With the ECB season already finished by opposition, the summits of the Tharsis Montes poking through this extensive cloud belt near the morning terminator could not be well observed. Some observations between mid-February and mid-May do show the phenomenon close to the limb. When, after opposition, there happened to be patchy white clouds near the terminator, it was also occasionally seen: for example, to Peach on Jun 8–10, Kumamori on Jun 26 and Morita on Jul 29.

In 1999,41 BAA data recorded N. polar clouds from Ls = 127° onwards. In 2012,1 the clouds revealed a spiral character from Ls = 129°, while in 2014 this vorticity had been apparent slightly earlier,2 from Ls = 124°. The value of De at the right season in 2016 was unfavourable, the seasonal period falling well before opposition, with the dawn terminator – where the polar clouds are always best formed – not yet observable. Nonetheless, positive sightings were recorded: see Figure 15.

Seasonally first to appear are the clouds at Baltia–Mare Boreum. Spacecraft data (Mars Express) first revealed an irregular a.m. cloud here from Mar 9 (Ls = 120°) and clear spirality during Mar 11–21. (On Mar 22 a patch of dust was also caught by MRO at the edge of the cap, but below telescopic resolution.) Our observers were quick to follow, and on Mar 21 & 24, Foster recorded a small, shapeless polar cloud following Mare Acidalium. On Mar 25 & 26 there was a faint but definite spiral cloud with a darker hollow centre on the morning side at Baltia, and the same type of feature appeared, less perfectly, on Mar 27–28.

Foster and Morales on May 5–9 caught a dusty white cloud here, showing once again that dust can be associated with these seasonal features. (See also Part I.) The HST on May 12 imaged a very irregular spiral. Kumamori saw a.m. cloud on May 21–30; on the last date (Ls = 161°) he imaged a dark patch at the terminator with cloud around it: a partial spiral. On Jun 2, Dijon saw an irregular spiral at Baltia. Later observations mostly revealed only the normal clouds forming the north polar hood (NPH) that covered the polar cap (NPC): for example, on Jun 4 the author saw irregular southward projections from the hood, while on Jun 11 a vertical white streak was recorded by Olivetti. However, a very small spiral can be traced upon Wesley’s Jun 22 image.