In March this year a total solar eclipse will be visible across the Faroe Islands and Svalbard (Spitzbergen) in the North Atlantic, the track passing between Iceland and the outer Hebrides and giving observers in the UK the opportunity to experience a very large partial eclipse. In Stornoway the eclipse will be almost 98%, and even in London 86% of the Sun will be covered (see F 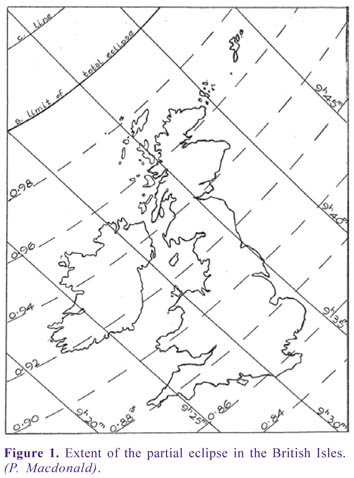 igure 2). Figure 1 shows the extent of the partial phase across the British Isles.
Table 1 gives details of the timing of the partial phases in different locations. With the event taking place at around 9:30 a.m. on a school day, public interest is likely to be very great. The BBC has already announced its Stargazing Live programmes will take place in March instead of January this year in order to coincide with the eclipse. Safe solar viewers, which are essential for observing this event from the UK at all times, can be purchased from the BAA shop: www.britastro.org/solarviewers.
The figures and table given here are taken from Peter Macdonald’s paper in this Journal in 2014 April (J. Brit. Astron. Assoc., 124(2), 77 [2014]), which also has full details of the total eclipse visible from t 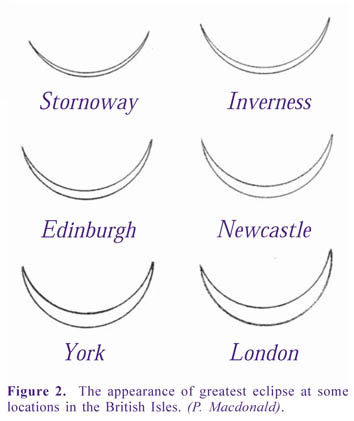 he North Atlantic. As Peter points out, ‘this eclipse is the largest to be visible in the British Isles since the total eclipse of 1999 August 11…  Although the eclipse of 2003 May 31 was annular in northern Scotland, its magnitude did not exceed 0.94. For observers in the British Isles, no other eclipse approaching this magnitude will occur until the early evening of 2026 August 12.’
Peter’s paper is available to signed-in BAA members on our website at www.britastro.org/pmacdonald, and other useful Web addresses are given below.
Hazel McGee 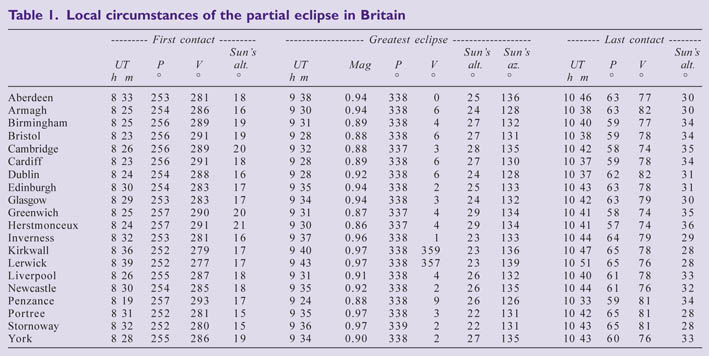