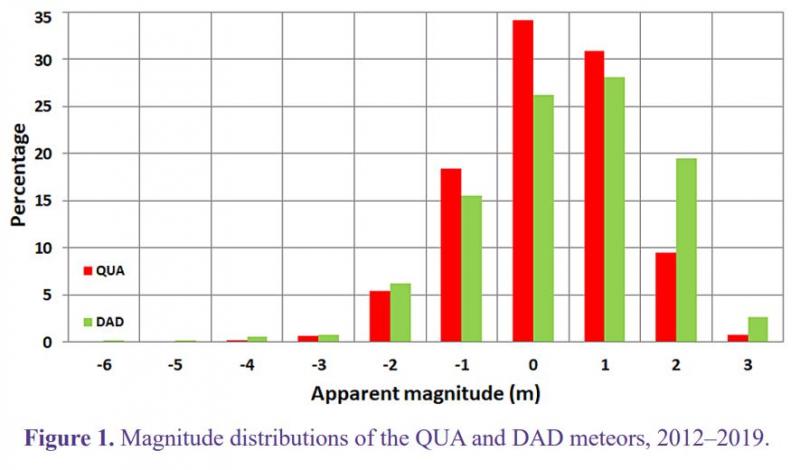 The NEMETODE team employed the equipment and methods described in previous papers,1,2 and on their website.3 These include Genwac, KPF and Watec video cameras equipped with fixed and variable-focal-length lenses ranging from 2.6mm semi-fisheye models to 12mm narrow field systems.

The Quadrantids (IAU Meteor Data Centre code 010 QUA) are medium-speed meteors with geocentric velocities (Vg) of 41km/s, active from late December to mid-January and appearing from a radiant in northern Boötes (the now defunct constellation Quadrans Muralis: the Mural Quadrant).

Their radiant is circumpolar from the British Isles, although it is low in the northern skies until after local midnight, climbing to an altitude of about 75° at the onset of morning twilight.

The QUAs produce low rates except for a ZHR (Zenithal Hourly Rate) of ~120 at maximum with solar longitude (λ☉) 283.16° (2019 Jan 4, 02:20 UT) according to the International Meteor Organisation (IMO),4 during a brief full width half maximum (FWHM) period of about 14 hours.5 Their parent body has been identified as the Amor near-Earth object (196256) 2003 EH1, although comet 96P/Machholz 1 has also been proposed as their progenitor.6,7

The December alpha Draconids (334 DAD) were discovered 10 years ago by the Japanese video meteor network, SonotaCo. They described this meteor shower as being active from late November to the end of December, with a maximum at λ☉ 256.5° (2018 Dec 8) and having a Vg very similar to that of the QUAs.8 Professional radar studies have shown that both streams are members of a northern toroidal group, a source of meteoroids that is highly inclined to the ecliptic.9

In late December the daily motion of the QUA and DAD shower radiants brings them into close proximity with each other, and having similar Vg increases the likelihood of single-station meteors being assigned to the wrong stream. Triangulation from two or more stations was used in this paper to identify candidates from the QUA and DAD radiants.

The first probable single-station DAD and QUA meteors in the NEMETODE dataset were recorded on 2010 Nov 16 and Dec 19,10 respectively, but it was 2012 December before the team obtained multi-station DADs and 2014 January for the QUAs. The latter were reported in the 2015 June Journal.2 At the 2017 Jan 21 Ordinary Meeting of the Association the author presented an update on multi-year Quadrantid results, including a discussion of their close similarity with the December alpha Draconids.11 This paper summarises the results from QUA meteors recorded in 2014–2019 January and DAD in 2012–2018 December.

UFO Analyser and UFO Orbit utilise a meteor stream catalogue of each shower’s start, maximum and end dates, radiant drift and geocentric velocity. UFO Analyser assigns a stream category to each single-station meteor and by default it extends the search window by 10 days before and after the normal shower date limits. To reduce the chance of a meteor being incorrectly assigned to the wrong stream, such as in this case with the overlapping activity timelines of the DADs and QUAs, the extension period was set to 0 days and this parameter setting was also adopted in UFO Orbit when identifying multi-station QUA and DAD meteors.

The most comprehensive catalogue distributed with SonotaCo’s UFO software suite is ULE_J6 (known as J6). EDMONd,12 the European viDeo MeteOr Network, has produced a J8 catalogue which includes many of the established minor streams missing from J6. The J8 catalogue is undergoing more frequent revision and version J8_02 (2019 August) was considered when analysing DAD and QUA meteors, with the following caveats.

It extends the QUA start and end limits by eight days more than J6, further increasing the overlap with the DAD shower in December. If the software also added 10 days to these limits this would give an exceedingly lengthy window of Dec 9 to Jan 29, for a shower with such a narrow FWHM around Jan 3–4. The QUAs would be deeply entangled with the DADs and some meteors would be incorrectly classified.

J6 and J8_02 use the same parameters for the DADs, except that J8_02 adopts a standard radiant circle of 5° radius, instead of the large radius of 9° used by SonotaCo in J6. Hence, using J8_02 rejects some DADs that are found by J6, so it cannot provide a good comparison with SonotaCo’s results; the Japanese group had to cast a wide net to discover and monitor this shower.

In the stream catalogues the values of radiant drift in right ascension and declination (dRA° and dDec°, in degrees per degree of solar longitude) play an important role in assigning a meteor to a stream category. The software uses the drift rates to compute the positions of the radiants that are active at the time of a meteor and checks if its trail passes within (or close to) the radiant circles. Any significant error in dRA° and/or dDec° could cause a meteor to be incorrectly classified. In J6, SonotaCo gives a dDec° value of +0.17 for the QUAs, but the IAU MDC lists it as –0.25 and in J8_02 it is –0.2.

For these reasons, this paper uses the J6 catalogue but with QUA values of +0.5 and –0.25 for dRA° and dDec°, respectively. 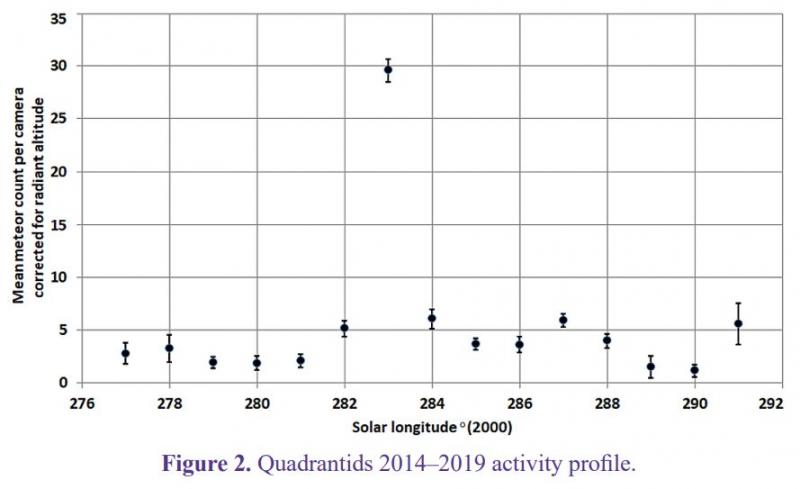