The Radio Astronomy Group in 2017 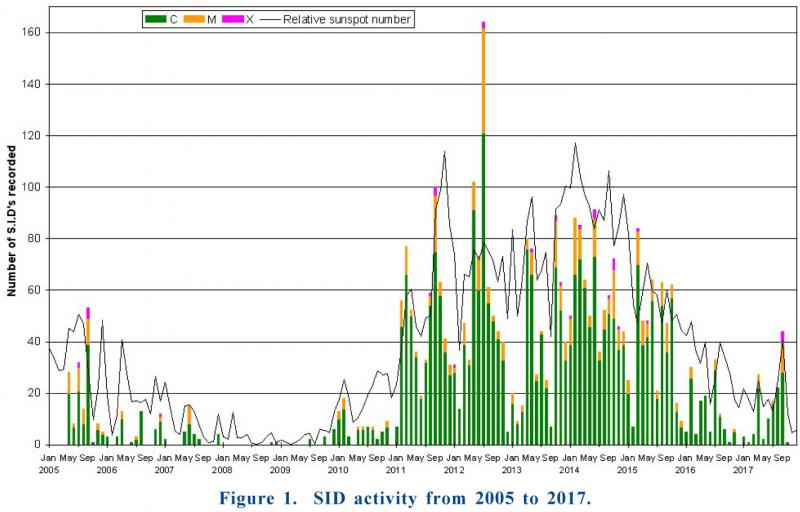 Figure 1 shows the number of Sudden Ionospheric Disturbances (SIDs) recorded by the Radio Astronomy Group (RAG) each month since 2005, plotted with the relative sunspot number R recorded by the Solar Section. Green indicates SIDs from C-class flares, yellow from M-class, and magenta from X-class flares. X-class flares are the most energetic events, and Figure 2 shows their occurrences through the solar cycle. On only three occasions in the last 13 years have we recorded four X-class flares in a month. The first was in 2005 September, towards the end of cycle 23. 2014 October was during the second peak of the current cycle, and 2017 September is again near the end of the cycle.

2017 got off to a very slow start, with just three SIDs recorded in January, and four in February. They were all from B or C-class flares. In March we recorded six SIDs, again all from small flares. The general X-ray flux as measured by the GOES15 satellite was at a very low level throughout this period, only starting to rise at the end of March. This marked the arrival of sunspot group AR12644 on the western limb of the Sun. Figure 3 shows SIDs from three of the four M-class flares recorded on April 2, by Roberto Battaiola (Milan) monitoring the 21.75kHz signal from Rosnay, France. The fourth M-class flare was much later in the evening, and only detected on the 24kHz transatlantic signal. Another M-class flare was recorded on April 3, the strongest of the month, at M5.8. A total of 61 SIDs were recorded in April from 35 flares.  (continued)