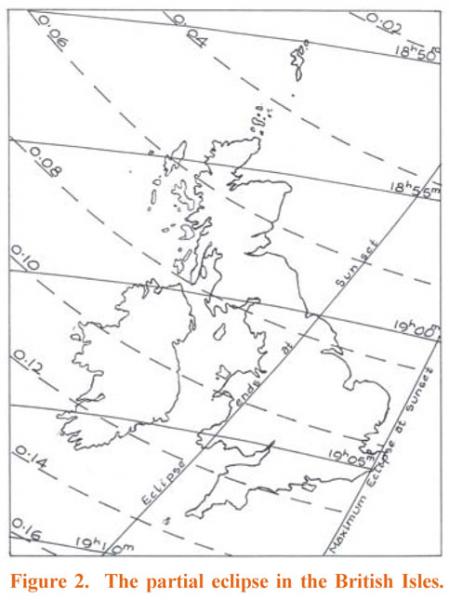 The track of the total solar eclipse of 2017 Aug 21 begins at sunrise at 16:49UT in the Pacific Ocean at longitude 172°W, latitude 40°N, crosses the United States and ends at sunset at 20:02UT in the Atlantic Ocean at 27°W, 11°N.
This eclipse is awaited keenly in North America as totality is visible from twelve of the United States: Oregon, Idaho, Wyoming, Nebraska, Kansas, Missouri, Illinois, Kentucky (where the eclipse achieves its greatest duration of 2m 40s at 18:25UT in long. 88°W, lat. 37°N, with the Sun at an altitude of 64° and the width of the path being 115km), Tennessee, North Carolina, Georgia and South Carolina. Partial phases of the eclipse may be seen from the remainder of North America, Central and northern South America, western Europe, extreme western Africa, Arctic regions and the Hawaiian islands. The eclipse is visible therefore, to some extent, from all of the United States.
The visibility of the event is illustrated in Figure 1, which is reproduced from Astronomical Phenomena for the year 2017 by courtesy of the Nautical Almanac Office, United States Naval Observatory.
The eclipse is the next in the series which includes that of 1999 August 11, total in the Isles of Scilly, most of Cornwall, part of Devon and Alderney. The most recent eclipse to be total in the contiguous United States was that of 1979 February 26, although on 1990 July 22 the total track crossed the Aleutian Islands and on 1991 July 11 totality was visible from Hawaii. The next total eclipse of the Sun to be visible from the USA occurs on 2024 April 8.
In the British Isles on 2017 Aug 21 a small partial eclipse is visible towards sunset, the magnitude ranging from 0.03 in Shetland to 0.14 in Scilly. The extent of the penumbra over the British Isles is illustrated in Figure 2… (continued)(Login or click above to view the full illustrated article in PDF format)