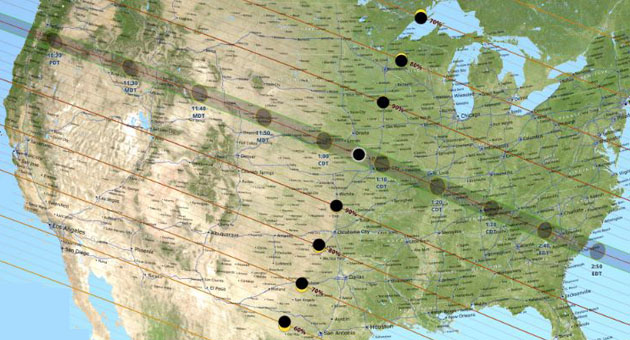 As shown in this map from NASA, the track of the total solar eclipse of 2017 Aug 21 crossed the whole of the contiguous United States from coast to coast. Totality could be seen from 14 states: Oregon, Idaho, Montana, Wyoming, Nebraska, Kansas, Iowa, Missouri, Illinois, Kentucky, Tennessee, Georgia, North Carolina, & South Carolina. Many BAA members and friends travelled to the USA for the event.
This report includes a selection of images and brief reports, most of which (with full imaging details) can also be found on the BAA website at www.britastro.org/eclipse2017. Many more images can also be found there and on individual Members’ pages. 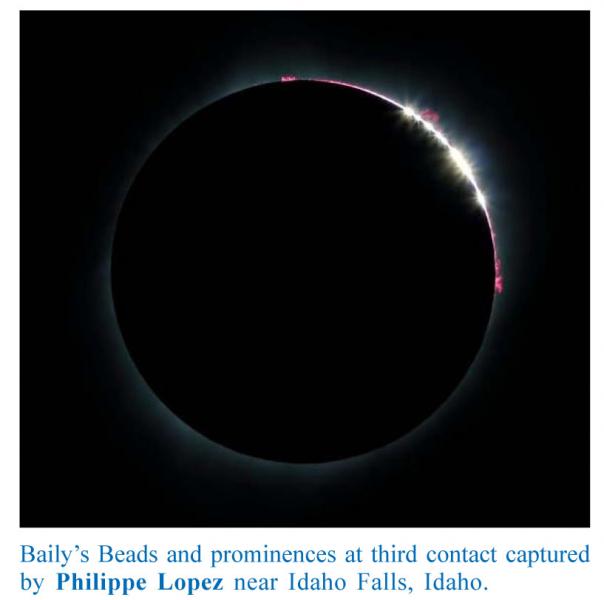 A naked-eye and binocular view

Peter Parish travelled from the UK with a group of around 350, including many BAA members, and observed from a well-equipped trailer park at Bass Lake, Shoshoni, Wyoming. He writes: ‘…At around 10.20am local time soon after first contact we noticed the tiniest nick near the top of the Sun’s limb… the cloud mass that had threatened to sabotage our view was moving away to the south… The sky was now blue in every part of the heavens that mattered and seeing conditions were close to perfection.
Through my filtered binoculars there were three sunspots across the Sun’s disk. They strangely put me in mind of the belt stars of Orion but these spots served to mark the progress of the eclipse as one by one they were hidden behind the black disk of the Moon.
I’d brought a white towel which I placed on the ground… The Sun was now a crescent and this shape was clearly visible when I projected the Sun’s image, pinhole method, through a piece of plastic with holes in onto the towel. More than five minutes before totality Venus was easily visible to the naked eye high up in a rich blue sky… As the crescent Sun became ever narrower I spread my hand a few inches above the white towel and examined my hand’s shadow. The shadow was sharp but more intriguingly, when I moved my hand to more than six feet away from the towel, the shadow instead of becoming diffuse and pale, as it would do in normal sunlight, remained as sharp and dark as before.
The Sun’s crescent was now a fine curved line and the surrounding light was surreal, indeed I had the impression it had a pinkish tint but [my wife] Val’s impression was it was greenish. 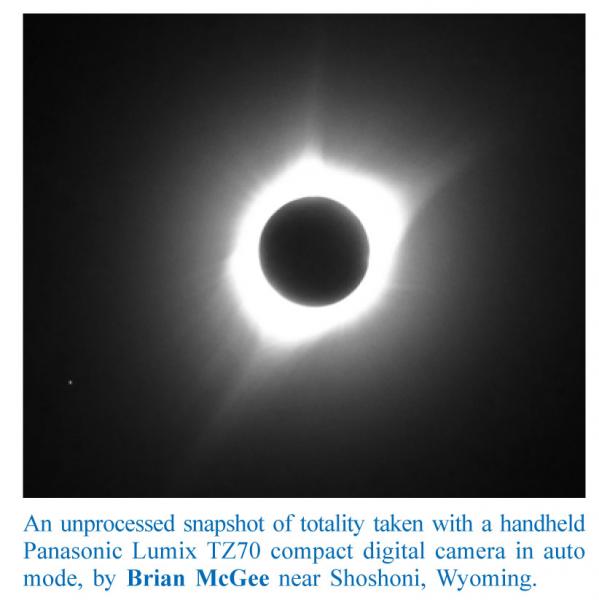 An eclipse veteran had now joined us and maybe twenty to forty seconds before second contact I saw faint elusive shadowy lines moving and flickering on the towel… The veteran confirmed immediately that they were the shadow bands I’d been hoping to see.
Suddenly totality was upon us… the solar corona was a beautiful pale cream colour and I thought it was fuller and more round than in 2006 [from Turkey]. I had the impression of delicate structure when I looked through binoculars (10x50s)… [there were] some nice solar prominences in the binoculars in the twelve o’clock, three o’clock and four o’clock positions. The three o’clock one especially was a thick curved arc and they were all a rich bright pink colour… A bright star which I have since confirmed was Regulus was easily visible and obvious in the binoculars to the left of the eclipsed Sun, about two solar diameters away from the Sun’s east limb…
Venus was very bright and conspicuous to the naked eye high up to the right of the Sun in the dark sky, indeed it was much the easiest object to see aside from the eclipsed Sun itself. In the dark sky below Venus I saw the star Procyon with the naked eye. It was much dimmer than Venus but was easily visible to me all the same and it’s the only star I’ve seen to date with the naked eye when the Sun is high (52° on this occasion) in the sky… The two minutes and twenty-three seconds of totality were almost up. We saw a beautiful diamond ring in the two o’clock position and I’ll always be grateful that the eclipse veteran was there. He alerted me that the Moon’s umbra shadow was coming and directed my attention upwards. The sky was much lighter in the northwest and I saw the edge of the Moon’s dark shadow, vast in size, perhaps 30° high in the northwest whisk silently and swiftly overhead across the sky in a second or two and vanish towards the southeast. The darkness had gone and normality had returned.
‘Look at the shadow bands’, the veteran reminded me and again I saw them just as before totality. I recall one last thing. Unlike in 2006 when there’d been a noticeable temperature drop during totality neither Val or I felt cold during the eclipse on this occasion.
The drama was over; the Moon was now leaving the Sun. The rest was anticlimax.
Peter Parish