The Triton stellar occultation of 2017 October 05 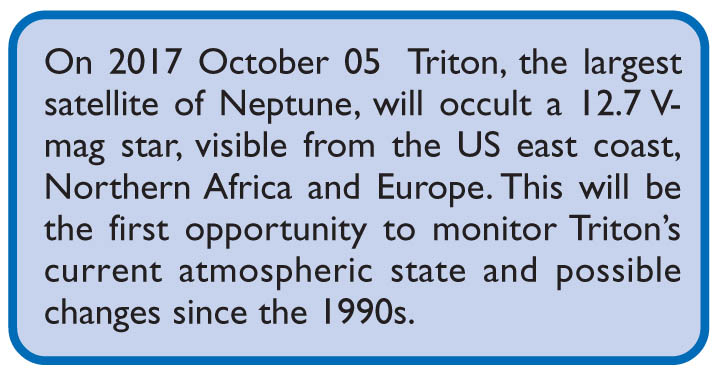 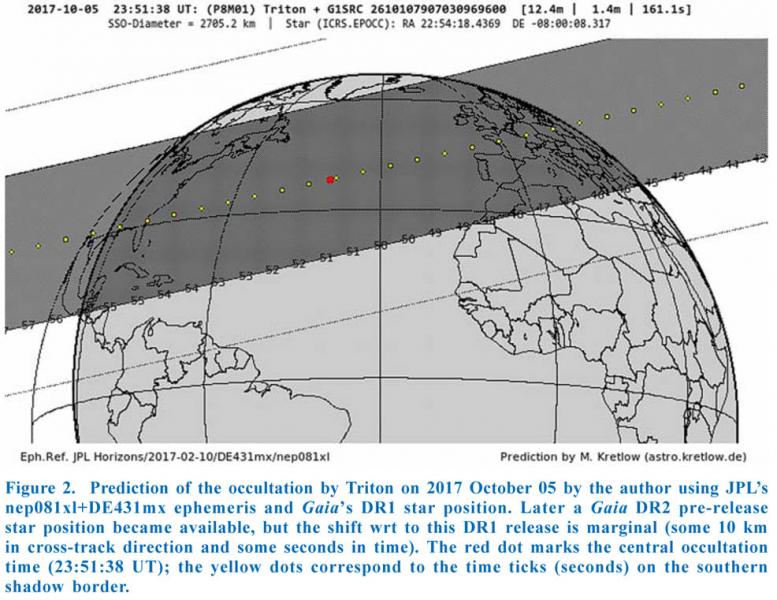 On 2017 October 05 Neptune’s largest satellite Triton will occult the 12.7 V-mag star UCAC4 410-143659, as seen from the US east coast, Northern Africa, and Europe. After almost 10 years since the last documented Triton occultation (observed on 2008 May 21), this event will be a new opportunity to gather data about Triton’s current atmospheric state and possible changes….

Scientific rationale
The stellar occultation technique is a very powerful tool for probing and monitoring planetary atmospheres. Not only can the atmospheric pressure be measured, but also haze layers can be detected through multi-wavelength observations, and by observing the so-called central flash, wind regimes in the atmosphere can be analysed.
Key questions are:
–    What is the current atmospheric state (pressure)?
–    Are there any (drastic) changes since the 1990s?
–    Are the haze layers seen by Voyager 2 in 1989 still present?
–    Can wind regimes be constrained from central flash observations?

Occultation predictions for this event are provided by several sources. For example by theEuropean Research Council (ERC) Lucky Star project group (http://lesia.obspm.fr/lucky-star/predictions) and by the author on his website (http://astro.kretlow.de/?Occultation-Predictions). See also Figure 2. The main occultation circumstances for the UK are given in Table 1.

Observation campaigns
Further information in addition to practical tips and suggestions will be available from a variety of websites, like the International Occultations Timing Association, European Section (IOTA-ES) (http://iota-es.de), BAA ARPS (http://britastro.org/asteroids) and dedicated individual webpages such as that by Tim Haymes of the ARPS:http://www.stargazer.me.uk/call4obs/NextEvent.htm. Announcements on mailing lists like PLANOCCULT and the release of a BAA e-bulletin are also planned.
It is noteworthy that SOFIA (Stratospheric Observatory for Infrared Astronomy) is also scheduled to observe this occultation.

Many thanks to Mike for an excellent introduction to this important occultation.

Suggested instrumentation would be of long focal length (e.g. SCT or Newtonian + Barlow lens) and CCD/video at 1 sec exposure (say), shorter if possible. We recommend trial observations of Triton on an earlier night (preferably the night before), or during the lead up to the event itself. The occulted star will be brighter than Triton but a full Moon will also be close by, so it may be worthwhile erecting a temporary ‘moonshade’ to prevent moonlight entering the telescope directly. Since timing is important, computer clocks need to be sync’ed to UT. For more information on video & CCD monitoring of occultations, see the web pages referenced in Mike Kretlow’s article.

The ARPS Section would also be pleased to receive visual observations from observers using telescopes of 30cm aperture or larger in good seeing.  At 10 arcseconds separation from Neptune, the 12.5-mag star will be a difficult object but do give it a try! Visual observers could make audio recordings (e.g. with a smartphone), adding a UT time marker at the start and end of recording to a precision of ±0.5sec or better.