The visibility of the Southern Cross from Britain

The Southern Cross (Crux, Figure 1) is the smallest of the 88 officially recognised constellations. Embedded in the most southerly part of the Milky Way, it contains several interesting objects, including the huge dark nebula known as the ‘Coalsack’ and a rich open star cluster, the ‘Jewel Box’ (NGC 4755). Observational properties of the four brightest stars in the Cross are detailed in Table 1, where ‘B’ is the Bayer designation of the star and ‘Name’ refers to its common name. The parameters α and δ are, respectively, the current right ascension (hours) and declination (degrees), while ‘Mag’ gives the star’s visual magnitude and ‘Arm’ its position relative to the centre of the Cross. With the star Acrux – marking the foot of the Cross – being currently at –63° declination, it is hard to imagine the constellation’s presence in our sky. However this situation is far from permanent, as investigated in this paper. 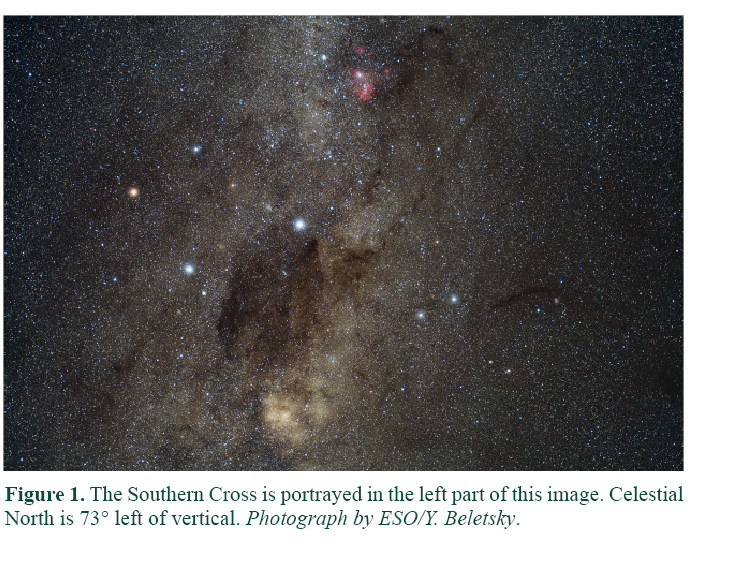 When the spring constellations of Coma Berenices, Virgo and Corvus cross the meridian, the Southern Cross is about 22° below the horizon of Greenwich. Figure 2 shows it inside the circumpolar circle that contains the stars invisible from London. Although theoretically the entire constellation should be visible from Luxor, Egypt (latitude ~27°N), atmospheric extinction makes it very difficult to observe stars within 1° of the horizon. For the more southerly regions, midnight culmination occurs around March 28. (continued…)