Dwarf novae (DNe) are one of the most interesting groups of variable stars being observed by the amateur community today. DNe are interacting close binary stars where matter is transferred from a secondary star to an accreting white dwarf, via an accretion disc. Instabilities within the disc lead to rapid brightening, which we see as outbursts within the system. These outbursts can last from a couple of days to weeks before the disc drains, after which the process starts again, and the outbursts repeat themselves in periods of a few days to many years.

The DNe are grouped into several sub-types depending on the physical aspects of the system, yet the main behaviour – a star entering outburst – remains the same. There is however one type of dwarf nova which bucks the trend – the UGZ stars, named after the prototype Z Camelopardalis.

Discovered in 1904 by former BAA President Henry Park Hollis and his team at Greenwich Observatory whilst working on the Greenwich Astrographic Charts and Catalogue, Z Cam has been under constant observation ever since, being circumpolar from the UK. Regular outbursts from magnitude +13.5 to +10.5 are observed twice per month on average, but at irregular intervals – which are totally unpredictable – Z Cam displays ‘standstills’ in the light curve, where the luminosity of the star becomes ‘stable’ somewhere between +0.5 and +1.0mag from maximum brightness. In truth, the star doesn’t stop varying completely, and on occasions the variations in standstill can exceed 0.5mag, yet the outbursts do stop.

These standstills can last from a week to several years, and the longest on record (in over 100 years of observations) occurred between 1976 June and 1979 April: some 34 months in total. At the time of writing (2020 October), Z Cam is undergoing the second-longest standstill ever recorded – 24 months. Since 2018 October, the star has been observed at a mean magnitude of 11.6mv (Figure 1). 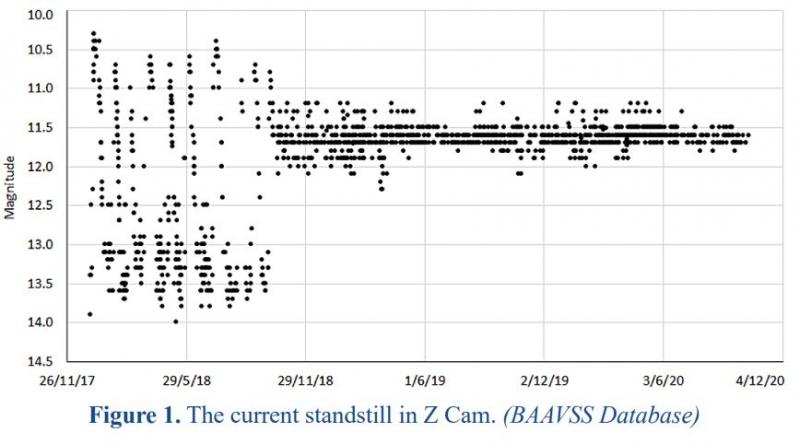 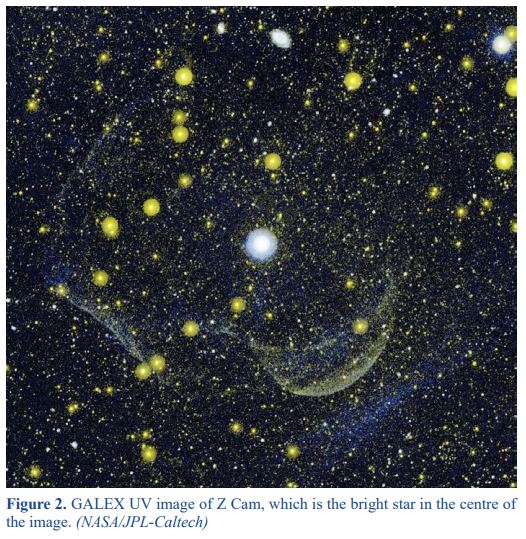 In most cases, standstills end with a fade to minimum brightness, but there have been notable occasions for several other UGZ-type stars when the standstill has appeared to have ended with the star entering outburst (one must remain slightly sceptical until more complete data of the end of standstill has been recorded). This behaviour has added to the debate on what actually causes an active dwarf nova to pause its outbursting cycle. The current favourite theory is variable mass transfer and irradiation of the secondary, but this does not explain how an outburst from standstill can occur from a disc that has apparently been partly drained.

Z Cam stars are not common, with 78 listed in the VSX database.1 Of these, 54 can be observed from the UK, but not all will display well-defined standstills as most have been categorised from their short outburst cycle and small amplitude during outburst. Table 1 lists several UGZ stars for which standstills have been observed in the past and they are good targets for observers with small to medium-sized telescopes.

In 2004, the GALEX (Galaxy Evolution Explorer) orbiting space telescope imaged Z Cam in far to near-UV and discovered a faint wispy shell surrounding the star, suggesting that Z Cam had once erupted as a classical nova. It had long been thought that perhaps there was a direct link between classical and dwarf novae, but this was the first direct evidence seen. In 2007 a second Z Cam star, AT Cnc, was observed to have a very faint nova shell remnant.2

Being circumpolar from the UK, Z Cam is observable throughout the year and offers both visual and CCD observers an opportunity to monitor a most extraordinary star. Finder charts for Z Cam and other UGZ stars are available from the BAA Variable Star Section and/or the AAVSO.