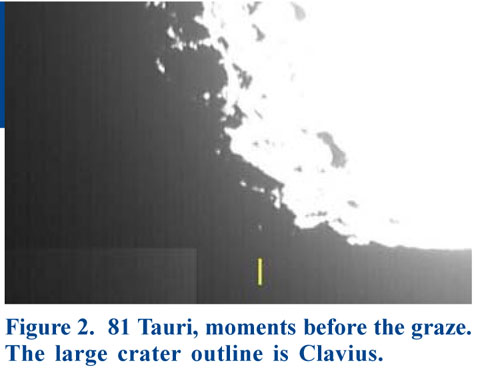 Observing a grazing occultation by the Moon is always exciting and well worth the organisational effort. On 2017 February 5, I travelled to South Leigh near Oxford to observe the graze of the 5th magnitude Hyades cluster star 81 Tauri as it skimmed the southern limb of the Moon. The site was selected to maximise the number of contacts I could potentially observe.
The software GRAZPREP 4.03 by Dr E. Riedel [IOTA-ES] indicated the station was 2306m inside the southern limit and predicted that as many as 14 contacts might be seen. The weather forecast on the day was poor, but on arrival the cloud was clearing and a grand total of thirteen graze contacts was recorded. The last reappearance was on the bright limb and couldn’t be timed.
The graze prediction was one of the brighter stars in the 2017 BAA Handbook. The track passed just north of Oxford, a 50 minute drive from my home. During the planning process I found a web page for the village of South Leigh, west of Oxford, very conveniently situated on the track. With their kind permission (gratefully acknowledged) I was able to set up in the Church Hall car park…. (continued)(Login or click above to view the full illustrated article in PDF format)