Cataclysmic variable stars (CVs) are binary stars in which a secondary donor star transfers gas to a companion white dwarf.1,2 In the absence of a strong magnetic field the transfer occurs via an accretion disc. Some CVs are dwarf novae which undergo quasi-periodic outbursts of the accretion disc. Others, such as the nova-like CVs, have stable non-outbursting discs. (Most classical novae observed decades after the outburst appear similar to nova-like CVs). Most CVs with orbital periods below about 2.5h are reasonably well-behaved dwarf novae, but at longer periods there is a wide variety of poorly understood CVs which exhibit a range of behaviours.

HS 0229+8016 was identified as a CV during follow-up observations of optically selected CV candidates from the Hamburg Quasar Survey (HQS) by Aungwerojwit et al (2005).3,4 Its orbital period of 232.550 ± 0.049min (0.16149d) was determined from radial velocity and photometric variability studies. HS 0229+8016 exhibited clean quasi-sinusoidal radial velocity variations of its Hα emission line, but no or very little orbital photometric variability. They suggested that it is either a nova-like CV or a Z Cam-type dwarf nova which they just happened to observe always in outburst or standstill. The authors concluded their paper by saying ‘optical long-term monitoring will be necessary to distinguish between these two possibilities’. 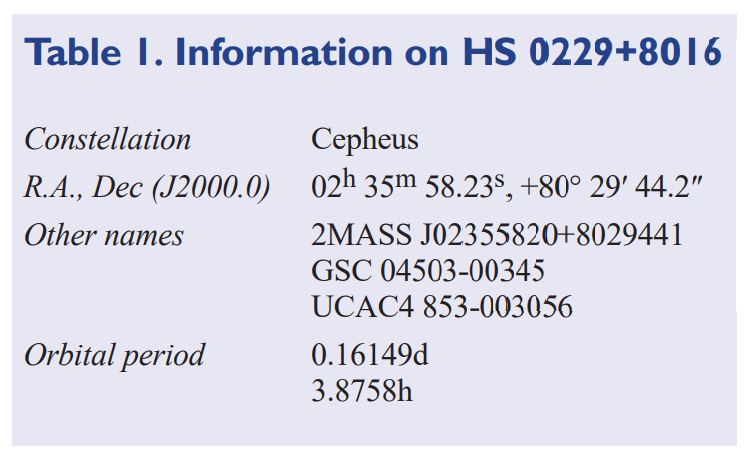 In 2006, Prof Boris Gänsicke of Warwick University suggested that I might like to carry out long-term photometric monitoring of some of the HQS CVs. To encourage other observers, Gänsicke also set up a website listing the known properties of a number of the CVs, including HS 0229+8016, which had been identified in the HQS.5 The results of the 13-year study are presented here.

To produce a long-term light curve of HS 0229+8016, we used data from the BAA Variable Star Section (VSS) Database and the American Association of Variable Star Observers (AAVSO) International Database. Observers are shown in Table 2. The data are mainly CCD measurements, either unfiltered or V-band using V-band comparison stars, although some visual estimates are included. The databases include some measurements with other filters, but these were not used in this study, with the exception of a small number of TG measurements (tricolour digital imaging using data from the Green channel only). We also used V-band photometry from the All Sky Automated Survey for Supernovae (ASAS-SN), which searches for both supernovae and other astronomical transients.6,7,8

The AAVSO data also include several time-resolved photometric observations in addition to single-point data (Table 3). These were used to investigate short-term variability of HS 0229+8016.

Encouraged by Boris Gänsicke, we also initiated an observational campaign at the end of 2018 November under the auspices of the BAA VSS. This was promoted via the BAA website, the BAAVSS-alert and CVnet-outburst email lists, and the AAVSO Forum. The aim was to intensify the photometric coverage of the object’s short-term behaviour, so observers were encouraged to obtain nightly snapshot measurements. Initially the campaign was intended to run until the end of 2019 February, but several observers continued to submit observations after that time.

Another fading episode took place in late 2016 and early 2017. It started around JD 2457694 when the star was mag. ~14.1. The fade to a minimum mag. of ~14.8 took some 40 days and the recovery to mag. ~14.0 took another 63 days. Thus, this fade lasted ~103 days and was 0.7–0.8mag deep. The duration and depth of the two fades was therefore similar. Note that the declining part of the second even appeared to take place in two parts: a gradual stage, followed by a more rapid component.

Cursory analysis of the long-term light curve in Figure 1 also shows a third fading event during 2018 October, centred on JD 2456575. Expanding this section of the light curve reveals that this was a very brief episode lasting no more than 10 days, during which the star faded from mag. 14.4 to 15.1: a depth of 0.7mag.

To clarify the aforementioned variations in brightness between mag. 13.4 and 15.1, we replotted the light curve from Figure 1 on a much expanded scale. The new light curve is shown in sections in Figure 2, where we no longer distinguish ASAS-SN data from the rest of the photometry. We decided to add lines joining each data point to guide the eye, since without these lines it is troublesome to see whether there is a regular variation or merely scatter. What is revealed is that for much of the time there are continuous low-amplitude cyclic variations. The episodes of continuous cycling behaviour appear to have lasted for up to 250 days (e.g. from 2456849 to 2457099) and in most cases probably continued for much longer, but gaps in the observational record mean it is not possible to say for how long.