Uranus 2014: a call for observations 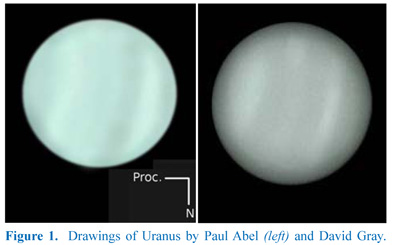 The distant planet Uranus has emerged from its conjunction with the Sun and is slowly becoming well placed for observation. By the end of May it will be rising at about 01:00UT and for this apparition, it can be found shining with its customary greenish hue amongst the stars of Pisces. Due to its great distance from the Sun, the planet moves slowly through the sky, so once you’ve tracked it down, you should find it fairly easily again a few nights later.
The planet reaches opposition on 2014 October 7 and the Saturn Section (which now looks after observations of Uranus and Neptune) would like to strongly encourage all observers with large telescopes to make some observations of this distant ice giant before it comes to opposition. A small telescope will show its small green disk, but telescopes of aperture 203mm (8 inches) or larger are needed for serious study of the planet. A finder chart showing its position throughout 2014 is given in the BAA Handbook.
As is well known, Uranus is something of a mystery. The only spacecraft to ever visit Uranus was Voyager 2 back in January of 1986 – and that brief encounter generated more questions than answers! The planet spins with a very pronounced axial tilt (98°), and bizarrely, lacks a strong internal heat source. Many of its moons are heavily cratered and scarred. The surface of the satellite Miranda resembles a ‘patchwork quilt’ of different terrains implying that it may have been broken apart and reformed by some catastrophic event in the distant past.
Telescopically, the planet has acquired a reputation for being somewhat bland and uninteresting, but many past observations were made when the planet was well south of the celestial equator and the small disk was subject to poor seeing. Things have improved enormously for northern hemisphere observers with the planet now well above the equator and continuing to climb.
However, Uranus is not the easiest target to observe. The small disk size of 3.5-4″ means that high powers of x300 or more are required to provide any realistic chance of seeing the rather vague surface details. Similarly, imaging the planet needs some care as the planet is somewhat faint.
These difficulties aside, in the last three years or so, several people have attempted to observe the planet in a serious way. Visual observers report the appearance of a brighter equatorial zone and vague cloud belts (Figure 1), while images by Damian Peach with an RG610 infrared filter seem to show brighter zones and vague spots (Figure 2). All this subtle activity suggests the planet may be more dynamic than previously thought.
Visual observers with large telescopes are invited to make and submit disk drawings (Uranus blanks can be found on the Saturn Section website). A careful eye should be kept to see if the surface features (vague belts and zones) show any apparent change over time. Visual observers with very large telescopes (15 inches or more) may want to try observing the planet with a W#25A red filter as well as working in white light.
Imagers should try to image the planet as often as they can, and it would be especially helpful if images could be taken in the infrared as it seems that these wavelengths are good at showing any brighter zones visible on the planet.
We hope to secure a number of reliable observations over the course of the apparition. Please send your drawings or images to the Saturn Section Director, Mike Foulkes [mike.foulkes @btinternet.com], as frequently as possible.
Paul G. Abel