Uranus during the 2015 apparition

Uranus reached opposition on 2015 Oct 12 in the constellation of Pisces, at RA 1h 8m, Dec. +6° 32′ and approximately 1° north of the star epsilon Piscium (71 Psc). At opposition its apparent magnitude was 5.7 and its apparent diameter 3.7ʺ.¹ Visual and digital observations were made by 15 observers between 2015 July and 2016 January.

The contributing observers are listed in Table 1. All observers made digital images, except those marked ‘V’, for visual observations only. 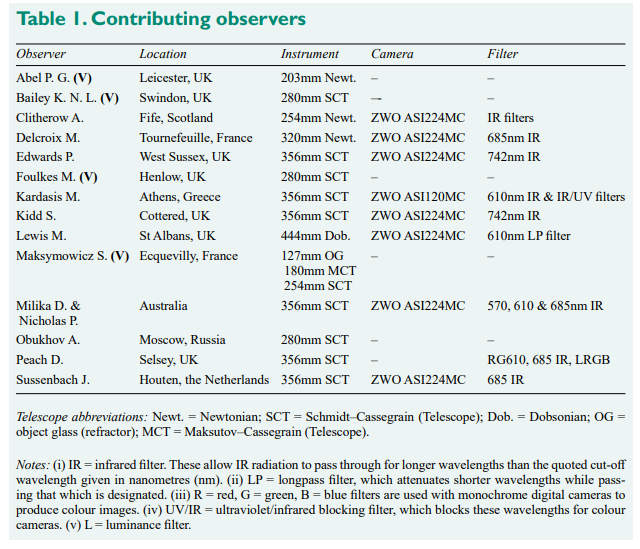 Using the WinJUPOS program, all disc drawings and images (after standardising their orientation to the traditional ‘south-up’ view) were measured to determine the latitudinal boundaries of the zones and belts observed. Averaging these measurements allowed approximate latitudinal boundaries to be defined, and these are shown in Figure 1.

It must be made clear that the nomenclature used in Figure 1 is provisional, and the boundaries are approximations; both are specific to this report. Given the many variables – observer experience, method of observing (visual/digital), aperture, filters, seeing etc. and the small size of the observable disc – the extent to which the observations broadly agree is impressive. Figure 1 at least provides a temporary point of reference that can be discussed, revised, amended and necessarily redefined by future observations.

The North Polar Region (NPR), extending from latitude 90°N to approximately 75°N, showed no distinct features during the 2015 apparition and its intensity remained constant throughout. The NPR was encircled by a North Polar Belt (NPB) at an approximate latitude of 75°–65°N and was observed (with varying degrees of clarity) both visually and digitally throughout the apparition. Both features can be seen illustrated in Figure 2(a–f).

Although the NPB was seen in digital images taken with 610nm and 685nm filters, it was better defined when observed visually.

The bright North Temperate Zone (NTZ), approximately at latitude 65–45°N, and the broad North Temperate Belt (NTB), approximately at latitude 45–20°N, are the two most distinct features on the planet whether recorded visually or digitally. The NTZ often shows subtle variations in intensity and texture, while the NTB has occasional embedded lighter patches that may possibly show atmospheric drift. An excellent digital image by D. Peach illustrates the variations in brightness of the NTZ (Figure 3a). These variations are also recorded by visual observers, most clearly by S. Maksymowicz (Figure 3b).